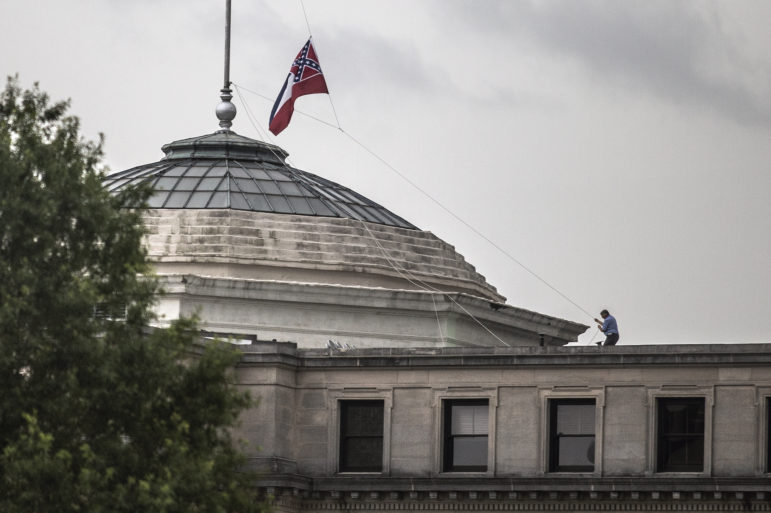 As has always been custom, the Mississippi state flag over the House chamber is removed at the end of the day.

Lawmakers are expected to begin the process of changing the Mississippi state flag, which features the Confederate battle emblem, as early as Saturday as the Legislature moves toward the end of its 2020 session.

As of Friday at noon, the plan — which several sources reiterated was “extremely fluid” — is for the House of Representatives to begin the legislative process to remove or replace the flag on Saturday morning.

A resolution will be filed that would suspend the rules so that legislators could take up a bill to address the flag. This resolution is expected to be the most difficult part of the process because it requires approval of a two-thirds majority in each chamber (82 of 122 House members, 35 of 52 Senate members). And the resolution must be passed by both chambers before either chamber could actually begin the process of debating the actual bill.

If the two-thirds threshold to suspend the rules is met, a simple majority would be required to pass the actual bill (62 of 122 House members, 27 of 52 Senate members).

Sources close to House leadership say they have — for now — the two-thirds majority votes to suspend rules, but they stress the margin is very thin.

On the Senate side, reports are that the leadership is “close” — within one or two votes — to having a two-thirds vote to suspend rules. Lt. Gov. Delbert Hosemann said the plan is for the House to move first.

“We have nothing to discuss on the Senate side, as you know … unless the House adopts their resolution,” Hosemann said on Thursday afternoon as he walked to a meeting with House Speaker Philip Gunn.

But as of noon on Friday, there is no consensus between House and Senate leadership over how, exactly, they will press forward with the actual bill itself. Many, including former Gov. Phil Bryant and U.S. Sen. Roger Wicker, have expressed support for a flag displaying the state seal, which includes the phrase “In God We Trust.” The influential Mississippi Economic Council, the state’s chamber of commerce, appeared to back that design with its release of a poll this week.

Legislative leaders have also discussed removing the current flag this session and forming a commission to develop multiple replacement designs to be placed on a ballot for a vote.

Gunn and Hosemann, as pressure mounts from religious, business, civic, university, sports and other leaders to remove the Confederate emblem from the flag, have attempted to whip a reluctant GOP majority in the Legislature into changing the flag.

Many Republican lawmakers have for years opposed changing the flag, particularly without a popular vote on the issue. Some who want the Legislature to change it fear a backlash from constituents.

And  Republican Gov. Tate Reeves – the de facto head of the state GOP – opposes the Legislature changing the flag.

But that sentiment appears to be changing among some lawmakers.

Rep. Karl Oliver, R-Winona, in a 2017 social media post said that those who support the removal of Confederate monuments should be “lynched.” In recent weeks, he declined to comment on the flag issue.

But on Thursday, Oliver issued a statement that said: “I am choosing to attempt to unite our state and ask each of you to join me in supporting a flag that creates unity — now is the time.” Oliver’s statement said the flag issue is growing “more divisive by the day” and “History will record the position I chose.”

A growing list of businesses, cities, counties and other groups have either stopped flying the flag or asked leaders to change it. Religious leaders have spoken out, saying changing the flag is a “moral issue.”  The NCAA, SEC, and Conference USA this month took action to ban post-season play in the state until the flag is changed.