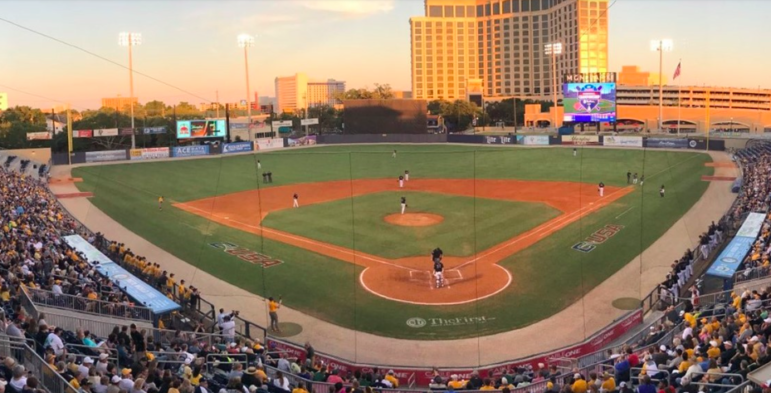 The 2019 Conference USA Tournament brough $2.1 million to the Gulf Coast.

Mississippi has hosted the last six Conference USA Baseball Tournaments and 11 of the league’s tournaments since 1996. But the Magnolia State will not host another unless the state flag, which displays the Confederate battle flag, is changed. 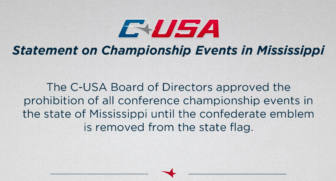 Conference USA Monday followed suit with the Southeastern Conference and the NCAA, announcing that no C-USA championship event will be held in Mississippi until there is a change. That would include the C-USA football championship game should the Southern Miss Golden Eagles qualify to host it.

Nine of the last 10 Conference USA baseball tournaments have been held in Mississippi, four at Pete Taylor Park in Hattiesburg, three at MGM Park in Biloxi and two at Trustmark Park in Pearl. The 2020 tournament, canceled due to the Covid-19 pandemic, was to have been held at MGM Park.

The 2022 C-USA baseball tournament had been scheduled for Pete Taylor Park, but the league will find another site if Mississippi does not change its state flag.

An economic impact study of the 2019 C-USA Tournament found that the event generated $2.1 million for the Gulf Coast, with more than 10,000 visitors staying an average of 3.5 days.

Southern Miss athletic director Jeremy McClain said he was not surprised by the league’s decision. Nonetheless, McClain said he was disappointed “any time when there is a situation where your student-athletes are penalized for something that is beyond their control.”

McClain took it a step further. “I am totally supportive of the NCAA and our conference,” he said. “This flag issue is much bigger than our hosting any kind of post-season sports event and even bigger than the economic impact of losing these events. There’s a bigger picture here. We need to change this flag in Mississippi.”

The 2021 Conference USA Tournament is slated for Ruston, La., and Louisiana Tech’s new baseball stadium currently under construction. Lane Burroughs, the highly successful Louisiana Tech coach, is a Collinsville native with strong Mississippi ties. Burroughs is a Mississippi College graduate who coached at both Southern Miss and Mississippi State before taking the Tech job.

Burroughs said he was not surprised by Monday’s C-USA news, but he was disappointed for his home state.

“It’s so very unfortunate,” Burroughs said. “My blood runs deep in Mississippi. College baseball is so strong in Mississippi. You just hate to see schools like Southern Miss, State, Ole Miss, Delta State and my alma mater, Mississippi College, lose chances to host post-season tournaments in a state that is so crazy about college baseball.

“That said, I’m on board with the decision. It’s time for Mississippi to change not only the flag, but what’s in our hearts.”

No more C-USA post-season events in Miss. until the state flag is changed