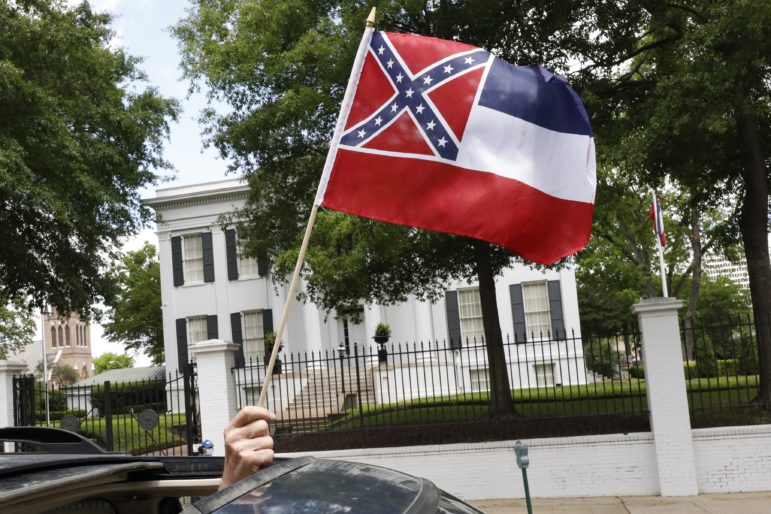 In this April 25, 2020 photograph, a small Mississippi state flag is held by a participant during a drive-by “re-open Mississippi” protest past the Governor’s Mansion, in the background, in Jackson, Miss. This current flag has in the canton portion of the banner the design of the Civil War-era Confederate battle flag, that has been the center of a long-simmering debate about its removal or replacement.

The powerful Mississippi Baptist Convention on Tuesday called for state leaders to change the Mississippi flag, with its Confederate battle emblem in one corner.

“It has become apparent that the discussion about changing the flag of Mississippi is not merely a political issue,” Baptist leaders said in a statement. “… The racial overtones of the flag’s appearance make this discussion a moral issue. Since the principal teachings of Scripture are opposed to racism, a stand against such is a matter of biblical morality.”

The convention includes about 2,100 churches in Mississippi, and Baptists are the largest denomination in the state, with over 500,000 members. Leaders said their stance on the flag doesn’t represent every member church, but they believe it represents a majority and asked for “Mississippi Baptists to make this a matter of prayer and to seek the Lord’s guidance in standing for love instead of oppression, unity instead of division, and the gospel of Christ instead of the power of this world.”

The convention’s statement said: “Given the moral and spiritual nature of this issue, Mississippi Baptist leaders offer prayers for our state officials to have wisdom, courage and compassion to move forward. We encourage our governor and state Legislature to take the necessary steps to adopt a new flag for the state of Mississippi that represents the dignity of every Mississippian and promotes unity rather than division.”

Under growing pressure to change the flag after decades of bitter debate, Mississippi legislative leaders say they are discussing the issue, but lack votes to change it as their regular session draws to a close.

Mississippi business, church and community leaders have called for a change, and the state faces intensified national scrutiny amid calls for removal of relics of slavery and the Confederacy.

Late last week, the NCAA and Southeastern Conference applied pressure to lawmakers to change the flag as both groups threatened to remove postseason collegiate sporting events from being hosted in Mississippi until the flag changed. Dozens of current and former college athletes in the state pushed the NCAA to make that decision.

On Monday, Mississippi State’s star running back Kylin Hill tweeted that he would not play football until the flag changed.

The Mississippi Economic Council, the state’s chamber of commerce, has long called for new state flag. In a statement last week, MEC said the current flag “Is offensive to many, not representative of all Mississippians and perpetuates negative stereotypes of our state.”

“MEC feels strongly that adoption of a new flag is a timely and high profile action that would improve Mississippi’s image, advance a new narrative about our state, and set the stage to enhance economic opportunities and improve quality of life in a fair and inclusive manner for every Mississippian.”