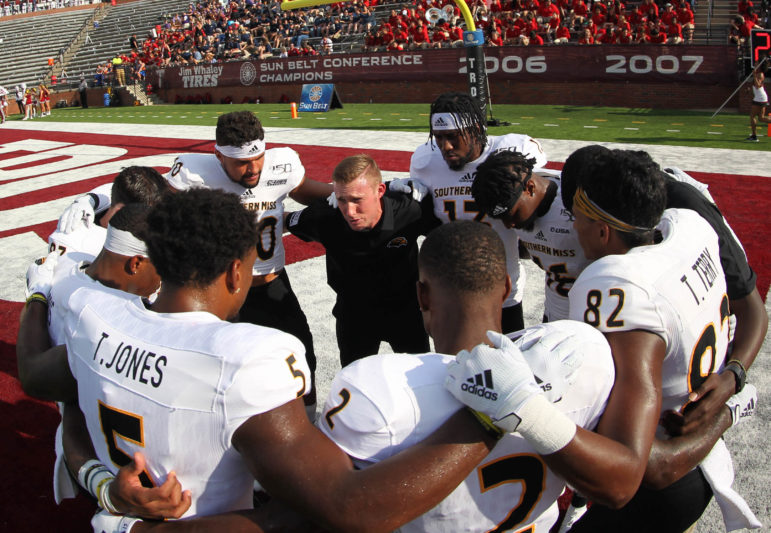 Scotty Walden, pictured with his Southern Miss receivers before a 2019 victory over Troy, is now USM’s interim head coach.

Football coach and philosopher Bum Phillips said it best: “There’s two kinds of coaches, them that’s fired and them that’s gonna be fired.”

Still, the timing of the Jay Hopson-Southern Miss breakup, announced on Labor Day, was shocking. Technically, Hopson’s departure one game into the 2020 season will go down as a resignation. Per all sources, Hopson met with athletic director Jeremy McClain following last Thursday night’s 32-21 defeat to South Alabama and the two agreed that the best next step for all involved was for Hopson to step down.

And so it is that Texan Scotty Walden, all of 30 years old, becomes the youngest Division I head coach in America. Walden, chosen as interim coach over more experienced coaches on the staff, has two weeks to prepare the Golden Eagles for their next game, an important Sept. 19 league contest with rival Louisiana Tech on national TV.

First things first: I’ve covered Jay Hopson since he was a defensive back for Billy Brewer at Ole Miss. I’ve covered him through his two bouts with cancer, through his history-making four seasons as a head coach at Alcorn State, through all three of his stints at Southern Miss. He is a good and caring man and a hard worker with a lovely family.

That said, things were clearly going south – and fast – for Hopson at Southern Miss. The Golden Eagles have lost four straight games by double-digit margins, including last Thursday night’s 2020 season opener with South Alabama. A 13-point favorite, Hopson’s team was outplayed in every aspect of the game by a South Alabama team that included 24 players from Mississippi.

Perhaps even more telling in the overall scheme of things was what happened in preseason camp. Just two weeks before the opener, defensive end Jacques Turner, linebacker Racheem Booth and wide receiver/kick returner Jaylond Adams – arguably the team’s best three players – were among several players to leave the team. Hopson is widely known as a “players coach,” and yet here were three experienced, all-conference level players leaving at once. Then came the listless performance in the opener against a South Alabama program that has never won more than six games in a season since elevating to Division I. 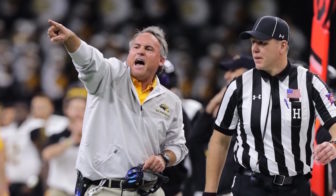 Complicating matters, the pandemic has left already cash-strapped Southern Miss in an even worse financial situation. McClain, the athletic director, must find new revenue streams to even hope to provide a better financial package for the next head coach.

Let’s put it this way: Steve Campbell, the South Alabama coach who whipped Southern Miss last Thursday night, makes $600 grand a year. His team plays in a brand new stadium and practices in a new indoor facility. Look around: Blake Anderson, who was Fedora’s offensive coordinator at USM, makes $825,000 plus incentives as head coach at Arkansas State. UAB coach Bill Clark has a new contract that averages $1 million a year. At Louisiana, Billy Napier makes $875,000 a year.

What’s more, the assistant coaches salary pool at Southern Miss is among the lowest in Division I. 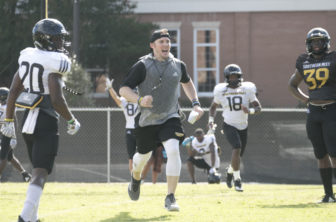 Scotty Walden, running through a practice here, becomes the youngest Division I head coach in the USA.

It makes far more sense – and is far more feasible – for McClain to focus his search on a young, up and coming assistant coach, preferably one with knowledge of Mississippi and the Gulf South area. In that regard, interim head coach Walden gets a head start on competition for the job. From all accounts he is a bright offensive mind and an energetic recruiter. As a 26-year-old head coach at East Texas Baptist (NCAA Division III), he achieved a 7-3 record in 2016 and his offense led the nation scoring 49.9 points per game.

Because of the school’s winning history, the job surely will attract many other candidates. One to watch is Tulane offensive coordinator Will Hall, an Amory native and son of long-time Mississippi high school coach Bobby Hall. Will Hall, 40, has been a highly successful head coach at West Alabama and West Georgia and has helped Tulane make tremendous recruiting in-roads in Mississippi.

I have no idea whether Campbell, the South Alabama coach, would even consider making a move but he’s another proven winner with all kinds of Mississippi ties. He won national championships at Delta State and Mississippi Gulf Coast Community College. One factor not to be ignored: Campbell already has 20 years in the lucrative Mississippi retirement system, including his stints at Southwest Junior College, Delta State, Gulf Coast and one year as Mississippi State offensive line coach under Jackie Sherrill.

The hiring of a permanent coach is months away. For now, it’s Walden’s job – and it’s a tough one.

With Jay Hopson out, where does Southern Miss football go now?