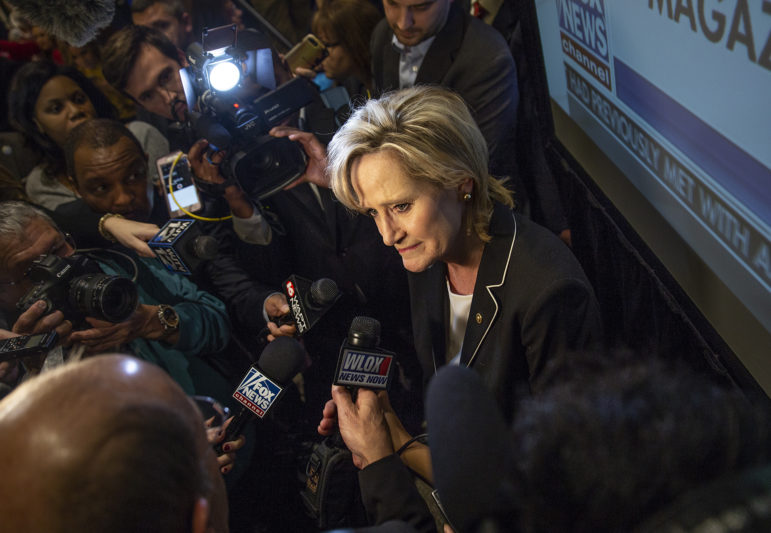 Cindy Hyde-Smith speaks to media after after winning the Senate runoff election against Mike Espy on Nov. 27, 2018. 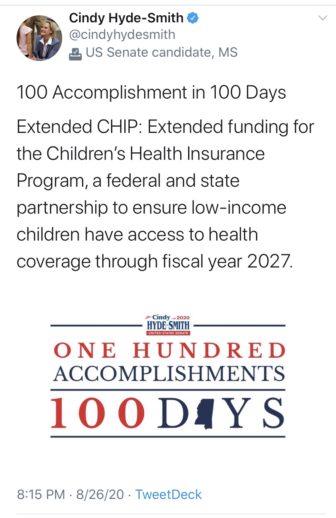 A screenshot of the Aug. 26 tweet that has since been deleted.

In an Aug. 26 tweet, Hyde-Smith touted her vote to extend the Children’s Health Insurance Program through fiscal year 2027 — a vote that her predecessor actually made in early 2018. The Hyde-Smith campaign deleted the tweet after a Mississippi Today reporter asked for clarification.

“It made its way into an accomplishment document, which was a mistake,” said Justin Brasell, a spokesperson for the Hyde-Smith campaign. “That’s why it was removed.”

Congress voted to extend the insurance program in January 2018, two months before Hyde-Smith was appointed to the Senate seat by then-Gov. Phil Bryant to replace long-time Sen. Thad Cochran, who stepped down for health reasons.

Hyde-Smith, a Republican, went on to win a special election later in 2018 for the Senate seat against Democrat Mike Espy, a former U.S. House member and U.S. secretary of agriculture. Espy is challenging Hyde-Smith again this year.

This election cycle, during the COVID-19 pandemic, campaigning has been limited. The “One Hundred Accomplishments in 100 Days” Twitter feed has been one of the few visual signs of the Hyde-Smith campaign. During the daily Twitter posts, she highlights what she believes are accomplishments of the U.S. Congress during her tenure.

CHIP, started in the mid 1990s during the Clinton administration, provides federal funds for health care coverage for the children of primarily working families who make too much to qualify for Medicaid.

“It’s beyond the pale that (Hyde-Smith) would brag about funding CHIP when she in fact voted to consider cutting $7 billion from the Children’s Health Insurance Program, a program that provides critical coverage for Mississippi children who would otherwise not have health care coverage,” the Espy campaign said in a statement.

“Once again Sen. Hyde-Smith is hurting Mississippi’s working families by following the marching orders of her party bosses,” the statement said.

The Espy statement was referring to a proposal of President Donald Trump to cut funds going to the program by $7 billion. In the summer of 2018, the proposal passed the House but ultimately failed in the Senate, though Hyde-Smith voted in favor of it.

Mississippi has 48,029 enrollees in CHIP as of July 2020, according to the state’s Division of Medicaid web page.

Hyde-Smith campaign touts healthcare vote — that her predecessor actually made