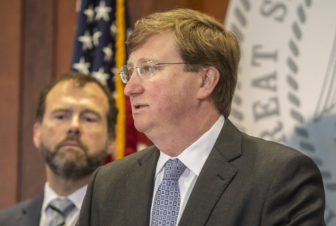 Gov. Tate Reeves speaks to media about his shelter-in-place order for Lauderdale County, as Executive Director of MEMA Col. Gregory S. Michel listens during a press conference at the State of Mississippi Woolfolk Building in Jackson, Miss., Tuesday, March 31, 2020.

As Mississippi’s number of COVID-19 cases continues to hit all-time highs, Gov. Tate Reeves is imposing a mandate to wear masks in 13 counties – including some of the state’s most populous.

During a Thursday news conference, Reeves said the criteria for counties chosen include having seen 200 new cases within the last 14 days or having had an average of 500 cases per 100,000 residents over that time.

“We’ve got to take additional measures or our health care system is going to be overwhelmed,” Reeves said.

The mask order goes into effect Monday, but during Thursday’s news conference Reeves pleaded with residents of all counties to wear masks when in public places and to also social distance.

The counties in the order touch most areas of the state. The counties are Hinds, DeSoto, Harrison, Rankin, Jackson, Washington, Sunflower, Grenada, Madison, Claiborne, Jefferson, Wayne and Quitman.

In addition, the mandates limit social gatherings to 10 people indoors and 20 outdoors.

Reeves had hoped to lift all restrictions put in place to combat COVID-19 by July 1, but during the past weeks the number of cases has soared, resulting in strains on the state’s health care system.

[Read next: State health officer calls out “reckless abandon” of Mississippians during pandemic]

“We went for literally months having no more than 400 cases in a day,” Reeves said. In recent weeks, the state has routinely reported more than 500 cases per day and has exceeded 1,000 new cases in a day.

Reeves’ new executive order does not change existing mandates limiting capacities at businesses such as restaurants, bars and casinos.

“To my fellow Mississippians: Please take this as an alarm,” Reeves said. “Our numbers are getting worse. We need your cooperation … The little things can make a difference. Please be smart. Stay safe and protect your loved ones.”

Despite the increasing number of cases Reeves continues to maintain his goal is to have schools open for the upcoming school year.