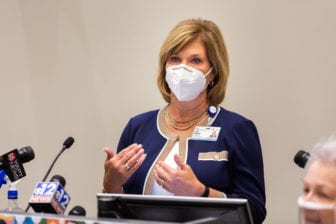 Dr. LouAnn Woodward, the vice chancellor of the University of Mississippi Medical Center, at a press conference at UMMC.

“This issue is not about limiting anybody’s right to make their own personal decisions,” said Dr. LouAnn Woodward, the vice chancellor of the University of Mississippi Medical Center, at a press conference at UMMC. “Things are not normal, and we can’t behave as if they are, because we’re fooling ourselves and the numbers are showing that what we’re doing now is not working.”

The surge in patients have led to limited bed space and ambulance diversions across the state, which in turn caused the health department to order six counties, mostly in Central Mississippi, to limit elective procedures again.

State Health Officer Thomas Dobbs said five of the state’s largest medical centers had zero available ICU beds as of Wednesday; four other hospitals had less than five percent availability, and three others have less than 10 percent, he said.

“We’ve been talking about this, saying it’s coming, and here it is. And not only is it here, it’s going to get worse,” Dobbs said. “Our biggest medical institutions that take care of our sickest patients have no room to take care of additional folks. Now is the time for hospitals to step up and try to counter the impacts of reckless social behavior.”

Elective surgeries in Hinds, Rankin, Madison, Forrest, Jones and Washington will be limited effective Wednesday through July 20. Health officials warned Thursday in a meeting of trauma care providers that more counties will likely be added. Gov. Tate Reeves said Wednesday that part of the reason for the swift change is due to some hospitals not adhering to the order to reserve 25 percent capacity for COVID-19 patients. Mississippi is one of only a few states to proactively renew elective procedure bans and currently has the third highest hospitalization rate per capita behind Arizona and Texas.

UMMC has already turned away transfers of COVID-19 patients from other hospitals, as well as patients with heart conditions, strokes, and trauma, said Dr. Alan Jones, the hospital’s assistance vice chancellor for clinical affairs. 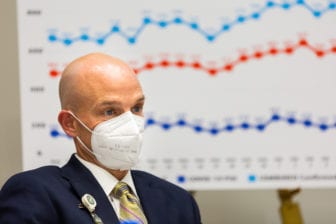 Dr. Alan Jones at a press conference at UMMC.

When asked about schools reopening in just a month, Dobbs said that teaching children will not be the hard part, but rather limiting recreational gathering among young people.

“We can educate kids safely, but we can’t do it if we’re living in this society of reckless abandon where it’s more important to go a bar and violate the rules than it is to have our kids go to school, our hospitals be able to take care of us, and our businesses be able to thrive,” he said.

Dr. Anita Henderson, president-elect of the American Academy of Pediatrics, Mississippi Chapter, said that school districts are discussing how to limit children’s movement when classes restart. She mentioned methods such as moving teachers between classrooms instead of students and encouraging classes outdoors.

“We know there’s a risk, we know children are going to get sick, but our goal is to mitigate that risk,” Henderson said. 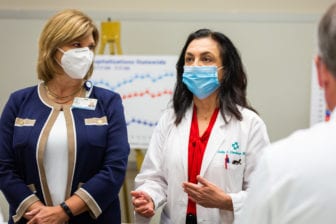 Dr. LouAnn Woodward and Dr. Anita Henderson at a press conference at UMMC.

With the state also in the beginning of the hurricane season, Dr. Jonathan Wilson, incident manager at UMMC, said that Mississippi and neighboring states do not have the resources to handle an additional major disaster during the pandemic.

“Hospital capacity has already been taxed,” he said. “You can only surge to a certain point, and then you’re surging into the parking lot where you’re going to start taking care of patients, and that’s really the scenario we’d be looking at if these trends continue and we have a major hurricane.”

Throughout the conference, Woodward and others repeated the three key mitigation guidelines of wearing masks, avoiding gatherings, and washing hands. Dobbs reiterated his frustration with Mississippians’ avoiding those guidelines.

“There was this mythical theory in people’s minds, that was never expressed, that we’re going to shut it down for three weeks and then everything’s going to be normal,” he said. “We sacrificed a lot in those three weeks, and then we’ve given it all back and then some.”

“I’m utterly frustrated by our inability to follow very simple things, and to believe crazy conspiracy nonsense as an excuse to not do the right thing,” he said.

Erica Hensley contributed to this report.