CLEVELAND – The Cleveland Central Middle School choir is rehearsing and raising money for a performance of The Star-Spangled Banner during a professional basketball game next month.

The choir will sing the national anthem at a Memphis Grizzlies game, Mississippi Today was notified last week. 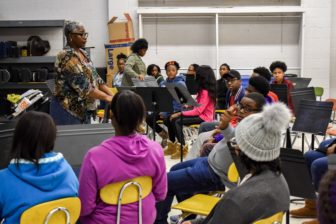 Around the country there has been controversy over whether a person should stand or kneel during The Star-Spangled Banner — resulting in strong reactions nationally and here in Mississippi.

Many feel that standing for the national anthem pays homage to the military, police officers and others who have sacrificed for the county. Those kneeling say they’re not protesting the national anthem or disrespecting the flag, but they’re trying to call attention to racial inequality in the U.S.

Despite how one may feel about the national anthem debate, Dorothy Jones, choir director at Cleveland Central Middle School, said singing in front of the Memphis Grizzlies and their fans is priceless and students are beyond excited. 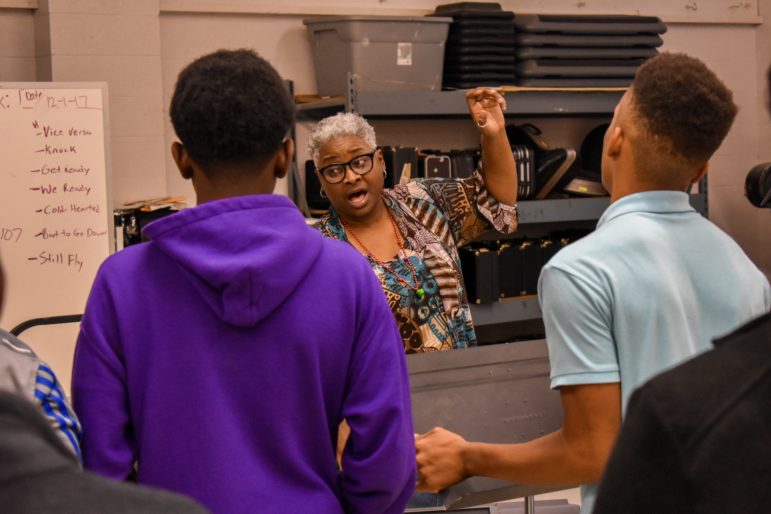 Choir director Dorothy Jones does warm up routines with the students in the band hall at Cleveland Central Middle School.

“I think it’s a great opportunity [for students] to learn the history, patriotism and leadership skills,” said Jones. “Our kids need help and we just want to do well for our school, the district and our city.”

Jones said she understands the protests, but to her, “The flag means more.”

Jones is a Marine Corps veteran, and her father served in the Army.

“I’ve always loved the flag, and I still love it, and I love being an American,” she said.

It’s important to teach kids the history and facts behind the national anthem, said Jones, but it’s more important to give them the choice to make their own opinions. She noted that no students have complained about performing the anthem.

Although Cleveland Central Middle’s application is approved, students still have to raise funds so they can attend the Jan. 10 game between the Grizzlies and the New Orleans Pelicans, said Jones.

The expense is $100 per student, which includes travel and meal expenses, a polo shirt and game ticket. There are currently 46 students. Jones said they’ve raised approximately $2,500 so far.

“We’re in the Mississippi Delta and many students are from a single-parent home,” said Jones. She mentioned how difficult it can be for some parents to give money, especially those with more than one child.

Arthur Johnson, former SIG Coordinator at D.M. Smith and current principal at Pearman Elementary, said one of his goals last year was to expose students to the arts and to get them to sing at the Grizzlies game.

The choir performed for the Mississippi Braves in Pearl but didn’t get a chance to grace the stage in front of the Grizzlies. The invitation from the Grizzlies is a testament to the Cleveland community, Johnson said, and shows how the arts and academics can work together.

This is the first year for the consolidated middle school and students can leave a great legacy, said Jones. She previously worked in Greenville and the choir sang at the National School Board Association conference in San Francisco where former President Bill Clinton was the keynote speaker; and while at Rust College in Holly Springs, they performed at the swearing in of state Supreme Court Judge Leslie King.

She said she wants to give back to the Cleveland community by exposing students at the middle school to more and diverse opportunities. 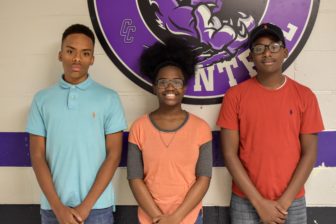 Second- and third-year choir students Jamiyah Bush, a seventh grader, and Myles Jenkins, an eighth-grade football player and Mr. Choir, explained how excited they were to hear of the news. But they are nervous.

“It makes me feel important because if you’re singing in front of professionals, it makes you feel like you’re a part of them too, so you’re important as well,” said Bush.

Christopher Love, also an eighth grader, football player and Mr. Cleveland Central Middle School, said he’s thankful for Jones and those involved that made this possible.

“I’m really glad that we’re getting acknowledged for what we’re doing because Ms. Jones, she’s really been doing good with us and I just want to keep moving forward.”