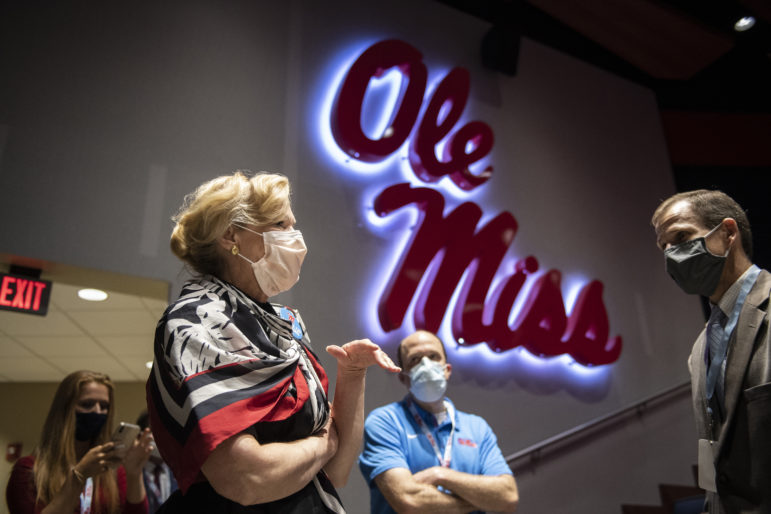 OXFORD — Dr. Deborah Birx, coordinator for the White House Coronavirus Task Force, met with state and local leaders at the University of Mississippi on Saturday and praised Mississippi and other states across the South for what she called “incredible work.”

Birx, on a tour of college campuses across the nation this week, acknowledged Oxford is one of the top cities in the U.S. for new cases per capita. She said the college town effect — where most of the population is comprised of students — can skew the rate, but the fact that the university is finding and isolating those cases is a good thing.

“We’re confident that the university is finding cases,” Birx said. “We want to encourage them to find more asymptomatic spread — but they’re finding cases, they’re quarantining, isolating and most importantly, they’re caring for those students.”

On her last visit to Mississippi in mid-July, the state was in midst of a growing outbreak, but she said the recent improvements toward the end of the summer are a testament to the power of sustained behavior change.

Masks and social distancing are working, she said, encouraging governors across the South to continue their efforts to reverse trends over the summer.

Mississippi is one of only a few Southern states to still have a statewide mask mandate, but Birx said it’s a piece of the many metrics that has pushed the state to no longer be considered a “red zone” risk by the federal task force. She added that eight weeks ago, about 60 of the state’s 82 counties had test positivity rates of over 10%. Now, just 23 do.

The state has cut its positivity rate in half over the same time, based on the task force’s metric that only counts some labs that reliably report both negative and positive results. At six months into the pandemic in Mississippi, cases are back down to where they were mid-June, before they began to sharply rise.

Though improved over the past few weeks, Mississippi’s new deaths per capita are still the highest in the nation, and August brought the most monthly deaths to date.

Birx pivoted her attention to college campuses, advising universities to have a plan but be flexible. And when an outbreak does occur, she said, university leaders should work through it without shutting down, if possible, to keep continuity of care and behavior change.

She spoke directly to students as well, saying on her visit she saw most students wearing masks but parents were not. She encouraged students to opt-in to new surveillance testing that looks for people with the virus but without symptoms. In addition to its contact tracing efforts and diagnostic testing for symptomatic students, the university is launching broader surveillance testing with the capacity of 500 per week, university officials said Saturday.

Birx reiterated that asymptomatic surveillance testing, particularly at universities because many students don’t have symptoms, will be “critical”. As of now, the university publishes a daily dashboard with case and other surveillance metrics, but not number tests performed. Across the state, daily tests have declined in recent weeks, as cases have. Diagnostic tests are expected to decline as fewer patients present with symptoms, but health experts advise random surveillance testing is also necessary to gauge and thwart asymptomatic spread.

“I want to be clear to every student: We know you’re not intentionally transmitting the virus, you don’t know you have it, but I think its key for them to know that you can be infected, not know it, and pass the virus on, and eventually through that cascade it can get to someone that’s particularly vulnerable and have a bad outcome,” Birx said. “Students can be a real voice to get that information across.”

She briefly addressed college football, saying she thinks it can be played safely if teams adhere to strict policies to limit spread, noting the Major League Baseball’s bumpy but ongoing return. But she did not address crowd sizes of said games.

State Health Officer Thomas Dobbs has repeatedly warned that college football brings more risk than just the sport itself, but the gatherings it brings with it have to be considered. The university’s own contact tracing team has tracked most cases back to social gatherings off-campus and has quarantined around 400 students total, officials said.

Birx’s 20-minute press conference was mostly meant to encourage, and she repeatedly conveyed the power of messaging by officials to meet people where they are, saying that sometimes leaders can forget the “public” in public health.

“The entire South has shown us a way forward with this virus, what Mississippi has been able to do just over the last four to five weeks, shows us if we change our behavior, if we wear our masks, if we social distance, if we wash out hands, if we take care of others, there’s a pathway forward that maintains retail open, maintains universities and schools open,” she said. “But it’s all of us together working together to protect communities by protecting each other.”

Editor’s note: The SEC case chart is courtesy of Welch Suggs, journalism and sports media professor at the University of Georgia.