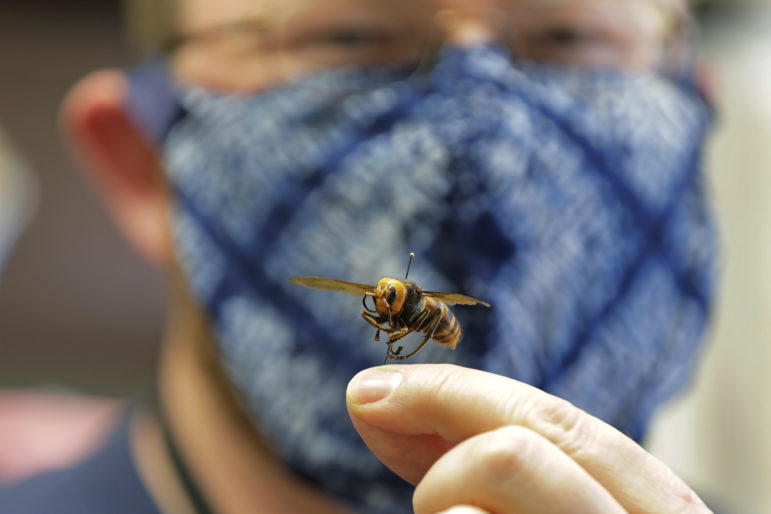 A dead Asian giant hornet sent from Japan is held on a pin by Sven Spichiger, an entomologist with the Washington State Department of Agriculture. (AP Photo/Ted S. Warren)

Just a few months back, when the reality of COVID-19 was setting in, when it was raining every day and flood waters were rising, when we were reading about the likelihood of an extreme hurricane season, when March Madness had been scrubbed, when college baseball had struck out, when The Masters had been postponed, when wildfires were engulfing Australia, when grocery shelves were emptying and the stock market seemed to be crashing, and when we couldn’t even buy toilet paper to wipe our you-know-whats, even more chilling news came our way.

Something called murder hornets were said to be invading the North American continent. MURDER HORNETS: Just the name sent chills down our spines. The photos were frightening. Some were over two inches long with big and evil black eyes, orange and black stripes and monster stingers. They fed on the heads and thoraxes of honeybees and could kill humans with their extremely deadly venom.

Speaking for me, I had nightmares. No, really, I did. Those giant Asian hornets invaded my dreams. I’d see them flying around and then one would buzz right at my nose and – I’d wake up sweating. I figured, given the way 2020 was heading, it wouldn’t take long for those wicked creatures to reach Mississippi.

I mean, Kobe Bryant’s helicopter had crashed, cancer had silenced Little Richard and John Prine had died of COVID. 2020 was a living nightmare. Could murder hornets be far behind?

Now I know you’re wondering where I am going with this because the murder hornets never came close to the Magnolia State. At least that’s what the Mississippi State University Extension Service tells us, and they are the experts.

On a recent afternoon when both my son, Tyler, and I had unexpectedly finished work early, we decided to go play a few holes of golf. It was a lovely, if hot, day at Lake Caroline. The fairways were lush. The greens were rolling perfectly. There were just the two of us and we had nobody in front of us. We played fast. And pretty well. I was one-under-par. Take that, 2020…

And then we got to the par-5 fifth. Tyler took the scenic route, left rough, then right. I missed the green with an easy wedge shot. The blazing sun came out from behind the clouds. Funny how hot it gets when things start going wrong on the golf course.

So Tyler, dripping sweat, tapped in for a bogey 6 and started to reach down into the cup to retrieve his golf ball. He saw something moving down there and quickly pulled back his hand. Both of us watched as a huge something with big wings and eyes like Spiderman – and orange and black stripes – appeared out of the top of the cup.

And then it flew, right at Tyler.

“It’s a bleeping murder hornet,” Tyler screamed, sprinting as fast as I have ever seen him run toward the sixth tee. He dropped his putter. His hat flew off. So did his sunglasses. His golf glove fell out of his back pocket. He left a trail is what he did. The thing followed and then flew off.

I finally quit laughing and returned to the business at hand. I had a five-footer left for par to remain one-under. I took my practice strokes, crouched over the ball – and then I heard a buzzing noise. I should have stepped away, but I didn’t. I yanked the putt left, and then I heard Tyler holler again: “The murder hornet is back, right above your head!”

I high-tailed it off the green toward our golf cart. Thankfully, the whatever-it-was did not follow. We never saw it again.

Yes, it’s funny now. Every time the subject comes up, we double over laughing. But…

And that leaves the obvious question. What was it? 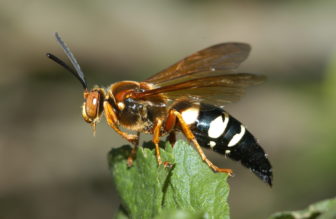 A cicada killer wasp, common in Mississippi, can be two inches long.

“I would say it almost had to be a cicada killer wasp from the size and the behavior you are describing,” answered Dr. Blake Layton, Jr., an entomology professor at Mississippi State. “Almost has to be. They look fierce and they have a huge stinger, although they rarely sting anybody unless you are a cicada. They sting cicadas, paralyze them and then carry them off. I get several calls a week about them and many come from golf courses.” 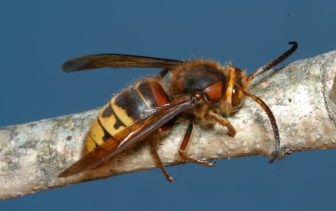 European hornets, like this one, are common in north Mississippi.

Another possibility, Layton said, is the European hornet, most common in the northern part of the state, which feeds on honey bees.

Do they get as far south as Gluckstadt?

“They certainly could,” Layton said.

He emailed photos of both varmints. I showed them to Tyler who had the closest look at what we encountered.

“Could be, although neither one looks big enough,” he said. “Tell you the truth, I didn’t hang around long enough to say for sure which one it was. I wasn’t exactly studying it.”

I can vouch for that. It might not have been a murder hornet, but it surely looked the part.

Murder hornets in Mississippi? No, but…