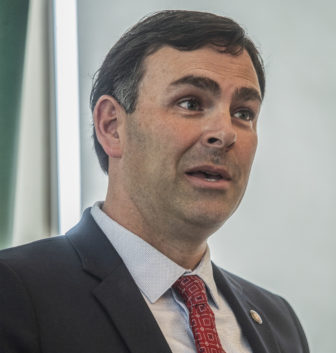 Secretary of State Michael Watson, the state’s chief elections officer, says he is “a bit concerned” with the ability of the U.S. Postal Service to ensure absentee ballots are mailed out and returned in time to be counted for the November general election.

“But our office can only control what our office controls, and the USPS isn’t on our list,” said Watson, a first term Republican, in prepared responses to questions from Mississippi Today. “I recently spoke to a circuit clerk who just this week received a mail-in absentee ballot that was postmarked last October, so everyone should be concerned about mail-in ballots, especially the states that have and are moving to vote by mail elections.”

USPS delays are expected play a huge role in the 2020 election, and the issue has become the subject of partisan debate. The Postal Service recently sent memos to many states, including Mississippi, saying it might not be able to deliver the ballots in a timely fashion. More people are expected to vote via mail this November to prevent crowded polling places in the midst of the COVID-19 pandemic.

At one point, President Donald Trump, who opposes voting by mail though he does it himself, said he opposed federal funding to ensure the Post Office can carry out its functions, especially delivering and returning election ballots. The Post Office has been negatively impacted because of a slowdown in the volume of mail caused by the pandemic.

“Now they need that money in order to make the Post Office work so it can take all of these millions and millions of ballots,” Trump said, adding if federal funds were not appropriated for the Post Office, “you can’t have universal mail-in voting because they’re not equipped to have it.”

The Democratic-controlled U.S. House has approved $25 billion to boost the Postal Service. The Republican-controlled Senate has thus far refused to take up any legislation.

In 2016, 28,716 ballots were mailed out in Mississippi. Watson said people eligible to vote absentee should request a ballot as soon as possible. The ballots should be available no later than Sept. 21.

Mississippi opted to do neither. Mississippi is also among a minority of states that do not have no excuse early voting.

“We have the most restrictive, onerous, difficult vote by mail laws in the nation,” said Sen. David Blount of Jackson. “We needed to change the laws before the coronavirus. We certainly need to change them now.”

Still, Gov. Tate Reeves said he believes all “legal” votes cast in the state will be counted despite the coronavirus.

“I am comfortable that Mississippi election laws that have allowed us to execute elections over so many years are adequate at this time in the middle of a pandemic,” Reeves said. “I think we can have a safe and fair election in November.”

A lawsuit, filed by the Mississippi Center for Justice, the American Civil Liberties Union and the ACLU of Mississippi on behalf of a group of Mississippians, is asking for a judicial ruling allowing all people to vote early because of concerns about voter safety.

In Mississippi, the law does not prevent a notary from charging to notarize a ballot or ballot application though, the Secretary of State’s office does have a regulation preventing it. But the office concedes the law would trump the regulation. It is not clear whether out of state notaries can charge for Mississippians who are sending in a ballot from out of state.