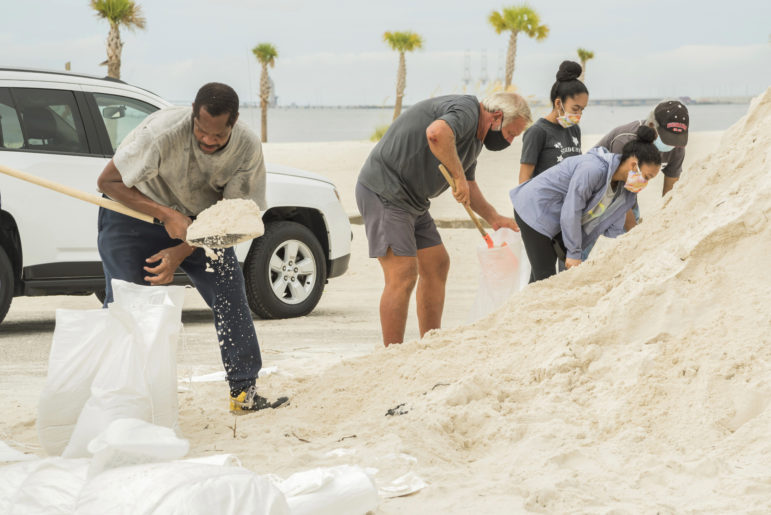 BILOXI — Mississippi Gulf Coast residents shoveled sand into bags and boarded up windows ahead of two tropical storms forecast to affect the state this week.

The historically rare one-two punch of tropical storms hitting the United States within hours of each other comes 15 years to the week after Hurricane Katrina devastated the Gulf Coast in 2005.

“This is no Katrina, but I’d be lying if I told you it didn’t cross my mind,” Gulfport resident John Smith said after he finished loading a few sandbags into the back of his pickup. “I’m sure as hell taking it seriously.”

By Monday early afternoon, forecasters believed that Tropical Storm Marco would dump several inches of rain along coastal counties and could produce a storm surge of 2-4 feet on Monday into Tuesday.

But state officials warned that a second storm — the more powerful Tropical Storm Laura entering the Gulf of Mexico on Monday night — could be more dangerous for the Coast later in the week. Laura is expected to become a hurricane, and as of Monday afternoon is forecast to make direct landfall near the Texas-Louisiana border.

But even on its current track, the size of that storm could still produce flooding and high winds for Mississippi.

“The fact is that the second storm is not yet in the Gulf of Mexico,” Gov. Tate Reeves said on Monday morning. “Just like we saw with Marco, there is a lack of predictability as to exactly where that storm goes… This is 2020, so we expect the unexpected. We expect rare events to occur, and what we’re seeing this week is exactly that.”

Hurricane preparations and evacuations are made more difficult by the COVID-19 pandemic, which continues to affect Mississippi worse than most other states. State officials on Monday morning again warned residents to avoid shelters if they could during the pandemic.

“Shelters will be opened if they are needed. COVID will not keep us from opening them,” said Greg Michel, executive director of the Mississippi Emergency Management Agency. “But it’s important to remember that congregate shelters do place more individuals at risk during this pandemic. We are stating that if you have other means and places to go, please use that as your first option.”