Six members of what is supposed to be a nine-member commission unanimously moved up their deadline to have a new flag design from Sept. 14 to Sept. 2 to allow more time to put it on a Nov. 3 ballot. 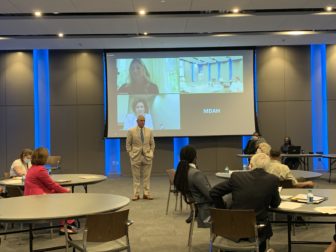 The commission agreed to over the next few weeks review hundreds of designs the public has submitted — and likely to choose a final design from one of those. They agreed to meet next week with a vexillologist, or expert on flags. They also unanimously chose former state Supreme Court Justice Reuben Anderson as chairman of the commission.

Officials at the meeting had little comment on Reeves’ failure to make his three appointments to the commission, other than the commission has enough members for a quorum and will move forward regardless.

Reeves, who opposed the Legislature removing the state’s 1894 flag with its divisive Confederate battle emblem but signed the bill into law, has given little explanation for his delay in appointments other than he has been too busy.

On Wednesday, after the commission had met, Reeves said: “I don’t know if you’ve noticed this, but we are dealing with serious hospital capacity issues (from COVID-19) and people are dying every day … We will make our appointments when we make those appointments.”

Although he had signed the flag commission legislation into law without raising such issues, on Wednesday he questioned whether lawmakers have the “constitutional authority to call a meeting of an executive branch entity” or to make appointments to such a commission.

Gunn, who led the legislative push to remove the 1894 state flag and authored the bill, thanked commission members and stressed the historic “weight” of their work as he opened Wednesday’s meeting.

“We are making history,” Gunn said. “Whatever banner we decide will represent this state, probably forever.

“When that thing goes up, you can say, ‘Hey, I did that,’ and your grandchildren will know you did it,” Gunn said. “… The children of Israel have a banner they unite behind … even pirates have a banner, skull and crossbones that says we rape and pillage, but they unite behind it … We need a design the entire state can be proud of that does in fact represent all our people.”

Gunn marveled that the Legislature voting to remove the flag with a Confederate emblem after decades of debate was “nothing short of a miracle” and said, “I want to be on the right side of history.”

Anderson, serving as the first African American justice of the state high court from 1985-1991, said he didn’t seek the role as chairman, but, “Now that I think about it, I’m probably uniquely qualified.”

“I went to law school at Ole Miss in 1965, and I think that every person on campus back then was carrying that flag,” Anderson said. “The marching band back then marched in Confederate uniforms. So I was not welcomed there.

“Every courtroom I walked into all those years, that flag told me I was not welcomed,” Anderson said. “I and thousands of Mississippians have been stiff-armed by that flag … We are the right group to take care of it.”

Four of the commission members attended Wednesday’s meeting at the Two Museums in person, with two there via video conference. The Mississippi Department of Archives and History is providing clerical help and support for the commission.

The commission reviewed its charter set forth by the Legislature: select a new flag design —which must include the words “In God We Trust” and cannot have a Confederate battle emblem — present it to the Legislature, governor and secretary of state so it can go before voters on Nov. 3 for an up or down vote. If voters reject the proposal, the commission will go back to work on a new design for the ballot in 2021.

Archives and History Director Katie Blount told the commission on Wednesday that the secretary of state’s office and county circuit clerks had expressed concerns that the Sept. 14 deadline for choosing a new design would be cutting it close on getting the flag on the ballot. Commissioners moved up that deadline to Sept. 2. They set meetings for July 28, Aug. 19 and Sept. 2, and said they might schedule others.

The Department of Archives last week put out a call for the public to submit designs, and has received about 600 so far. The commission considered letting archives staff winnow these down to a short list for them to view.

But commissioner Mack Varner, a Vicksburg attorney, said he wanted to look at all the submitted designs, to which others agreed. They plan to have have a short list of 25 designs selected by Aug. 19.

The commission is not required to pick a public-submitted design and could come up with its own, but commissioners appeared unanimous in wanting to choose from public proposals.

“I think the public’s engagement is very important in this,” said Commissioner Sherri Carr Bevis of Gulfport, a marketing and communications executive.

Anderson told his colleagues that as a longtime jurist he believes “the phrase In God We Trust is a challenge, constitutionally.”

“But if there ever was a time that Mississippi and the country needed In God We Trust, it is now,” Anderson said. “I look forward to supporting that phrase.”