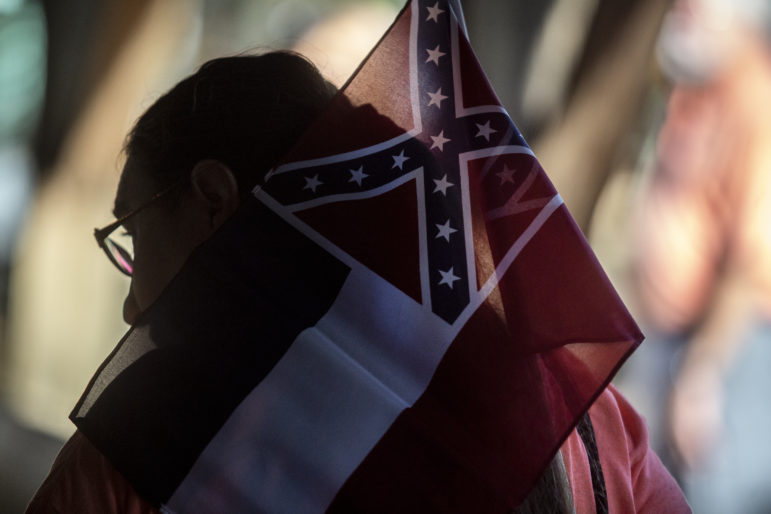 A fairgoer holds a Mississippi state flag during the Neshoba County Fair on Wednesday, July 31, 2019.

The president of the Mississippi Association of Educators, the state’s teachers union and powerful education lobby, asked teachers across the state to call lawmakers and demand they change the state flag, the last in the nation containing the Confederate battle emblem.

Erica Jones, president of the association, sent an email early Thursday morning to the organization’s thousands of members asking them to “call your state representative and state senator and ask them to support suspending the rules to allow for a bill to change the flag to be considered.”

The call to action comes as a bipartisan group of lawmakers, with House Speaker Philip Gunn’s blessing, is whipping votes and drafting a resolution that would change the state flag.

“Educators are charged with ensuring our students feel safe, cared for, and protected in their schools. That is a daunting task under the best of circumstances,” Jones wrote in the email, which was also posted to the organization’s Facebook page. “When there is a racist relic of the past flying above our schools, it is simply not possible to say we are fulfilling that duty. We would never stand for displaying a symbol of hatred inside of our classrooms. Why should we tolerate it outside of our school buildings, next to the doors our students walk through each and every day?”

Jones continued: “As any of us would tell our students: don’t be a bystander. Be an upstander. If you know something is wrong, speak up. Don’t stand idly by while people are hurting. That’s why we’re calling on lawmakers to do the right thing by speaking up for all of Mississippi’s students and taking down the state flag.”

Mississippi Today reported on Tuesday that several House Republicans and Democrats met behind closed doors to discuss changing the state flag. After later meeting with Gunn, who supports changing the flag, the group began drafting a resolution that would replace the current state flag with the Stennis flag, a design that has gained momentum in recent years.

The conversation behind closed doors this week marks one of the first earnest legislative discussions about changing the state flag since the 2001 referendum in which Mississippians voted nearly 2-to-1 to keep the current flag. It also comes as tens of thousands of black Mississippians and their multi-racial allies march the streets to protest racial inequalities in government.

The Mississippi Association of Educators, one of the most powerful lobbies in the state, putting its weight behind the legislative effort is notable as lawmakers working to change the flag need to garner commitments from at least 35 Republican House members.

House leaders told Mississippi Today on Wednesday that they received private commitments to change the flag from “about 20” Republican House members. “About 20 more” Republicans are on the fence, said Rep. Robert Johnson, the House Democratic leader from Natchez.

The teachers association has successfully swayed votes of lawmakers on both sides of the aisle on key pieces of legislation in recent years. Lawmakers routinely work to satisfy the organization’s policy wishes in efforts to avoid becoming inundated with communications from public school teachers across the state.

Lawmakers this week said they had already been bombarded with calls and emails from Mississippians about changing the flag. Jones’ call to action on Thursday will likely exacerbate that reality.

“It is our duty as educators to continue standing up for our students and advocating for what we know to be right,” Jones wrote. “Changing the flag is not a partisan issue. This is a matter of right and wrong. This flag is wrong, and it’s time to take it down.”

‘Racist relic of the past’: Powerful teachers group pushes to change state flag