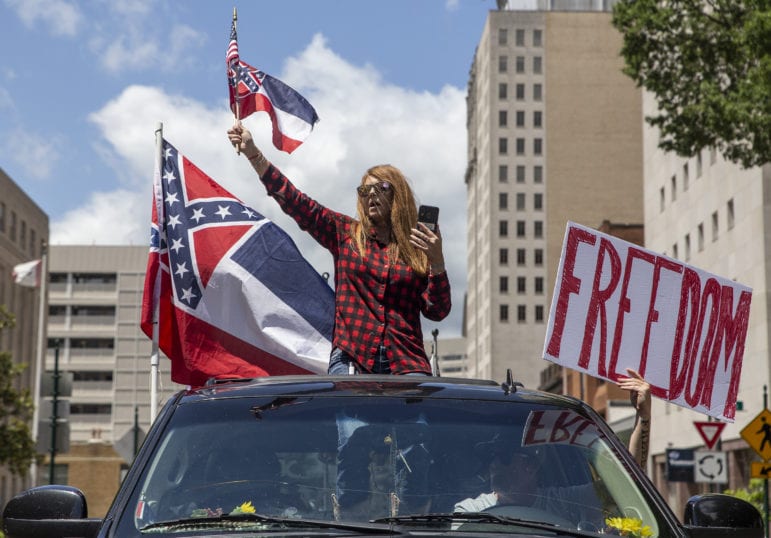 A bipartisan group of Mississippi lawmakers, with the blessing of Speaker of the House Philip Gunn, began whipping votes and drafting a resolution on Monday to change the state flag, which was adopted in 1894 and is the last in the nation containing the Confederate battle emblem.

The conversation behind closed doors this week marks one of the first earnest legislative discussions about changing the state flag since the 2001 referendum in which Mississippians voted nearly 2-to-1 to keep the current flag. It also comes as tens of thousands of black Mississippians and their multi-racial allies march the streets to protest racial inequalities in government.

About a dozen Republicans and Democrats in the House met privately on Monday afternoon to discuss changing the flag. Later in the afternoon, representatives of that bipartisan group met with Gunn to gauge his interest in helping their efforts, according to several sources with direct knowledge of the meeting. 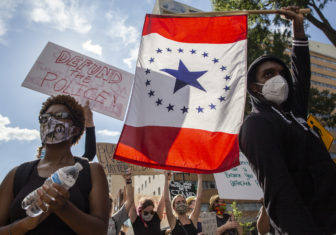 A protester holds a Stennis Flag, which is the proposed design of the new Mississippi state flag, during the Black Lives Matter protest in downtown Jackson, Miss., Saturday, June 6, 2020.

Gunn, who has publicly advocated for changing the flag in years past, told the lawmakers he would support a suspension resolution that would adopt a new state flag. The resolution, which House attorneys began drafting Monday afternoon, would replace the current state flag with the Stennis Flag, a design that has blossomed in popularity across the state in recent years.

Suspending the rules to consider the change would require a two-thirds of the current House members (80 out of 120 current members). Gunn told the lawmakers he would ensure the resolution passed through House committee if the lawmakers could secure verbal support from around 30 Republican members this week.

Adding the potential Republican commitments to the 45 votes of the Democratic caucus, the House would be within eyeshot of solidifying a two-thirds, veto-proof majority to change the flag.

After the meeting with Gunn, several lawmakers began calling their colleagues and whipping votes on Monday afternoon, though some expressed doubt they could find 30 solid commitments from Republicans.

In 2015, Gunn publicly advocated for changing the flag, though no House bill to change the flag has passed through committee during his nine years as speaker. Dozens of bills are filed each year in both the House and Senate to change the state flag, but all of them have died in committee.

Mississippi lawmakers could change the state flag today if they wanted. Here’s how.

If the House were to pass the resolution to change the flag, it would move to the Senate for consideration. Lt. Gov. Delbert Hosemann, who presides over the Senate, said during his campaign last year that voters, not the Legislature, should decide the fate of the state flag.

But several state senators told Mississippi Today this week that they believe Hosemann, a moderate who has maintained close working relationships with leaders of the Legislative Black Caucus, could be open to the idea of legislative action, particularly during this moment of protest across Mississippi and America.

If the bill were to pass both chambers, it would move to the desk of Gov. Tate Reeves. On Monday, Reeves sidestepped several questions about his personal views on the state flag during a press conference. Reeves did say, however, that he believes Mississippians, not lawmakers, should decide the issue at the ballot.

“There are a lot of people who have been vocal about this issue for a long time,” Reeves said. “My position has not changed. I spent much of 2019 telling the people of this state what I believe is there is going to come a time at some point I’m sure, when the people of Mississippi are going to want to change the flag. My position is, when they want to do that, it should be the people that make that decision, not some backroom deal by a bunch of politicians in Jackson.”

Sources close to Monday’s discussions said Gunn told lawmakers he would like to keep the state flag from reaching the ballot, where it would almost certainly incite a bitter, months-long campaign that would paint Mississippi in a negative light.