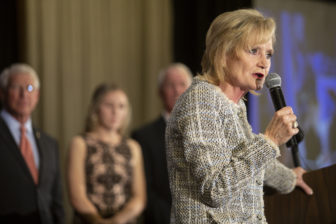 WASHINGTON — President Donald Trump, in a last-minute effort to bolster the Republican Party’s majority in the U.S. Senate, traveled to Mississippi in late November 2018 with one mission: Get U.S. Sen. Cindy Hyde-Smith elected.

In two stops in one day just hours before the runoff special Senate election in 2018, Trump flew to rallies in Tupelo and Biloxi to boost Hyde-Smith, the appointed senator who had stirred up controversy in a runoff election against Democratic heavyweight Mike Espy.

“Cindy is so important, so respected,” Trump said in Tupelo. “If we win tomorrow, (Republicans in the Senate) will be at 53-47.”

Hyde-Smith won that runoff election, in great part because of Trump’s endorsement, and became the Senate’s fifty-third Republican. With key votes expected in his trial, including whether to call witnesses, allies are crucial.

Now more than a year later, Hyde-Smith is emboldened by the hyper-partisan moment and is working hard to repay the man who solidified her place in Washington. The Senate began hearing arguments this week from the Democratic-led House, which voted to impeach him in December.

Once timid around reporters and prone to public gaffes, Hyde-Smith, with another year of working among one of the most polarized political bodies in U.S. history, is embracing her identity as a Republican senator in 2020.

A team of seven House Democrats is laying out a case to the Senate why the president should be removed from office, but most members are sticking firmly to party lines. Hyde-Smith has shown unwavering support for Trump on social media, referring to the impeachment trial as a sham and a hoax, brushing aside the notion of impartiality.

Hyde-Smith was first appointed to the position by then-Gov. Phil Bryant in April 2018 to replace Sen. Thad Cochran, who stepped down from the post for health reasons. She secured her position as an elected official seven months later when she defeated Espy in a hard-fought special election, but this year will be the first she vies for a full six-year term.

She announced her candidacy in a January press conference at the Mississippi Republican Party headquarters in downtown Jackson. Her congressional colleague Sen. Roger Wicker endorsed Hyde-Smith and reinforced party unity at the event, telling the crowd “We are teammates.”

Espy has been actively fundraising on Hyde-Smith’s stance on impeachment.

“My question for senator Hyde-Smith is how you can take the juror oath in one breath and violate it in the next?,” Espy said in a Jan. 9 statement when he announced he qualified for the election.

“Sadly, in her brief term in office Senator Hyde-Smith has shown us who she is, and we should believe her. She seems only interested in following the beck and call of her party leaders.”

But with Trump continuing to enjoy high approval ratings in the state and recalling Trump’s direct role in her 2018 campaign, Hyde-Smith’s loyalty to Trump could come with high political upside later this year.

“I think you can tell I am ready for this campaign,” Hyde-Smith said.