(Editor’s note: The National Sports Media Association today announced that Rick Cleveland, Mississippi Today sports columnist, has been selected Mississippi Sports Writer of the Year for a record 12th time. Cleveland first won the honor as a 21-year-old sports reporter at the Hattiesburg American in 1975.) 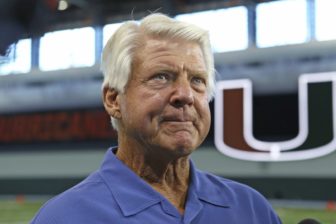 If you were watching pro football Sunday, you probably saw 76-year-old Jimmy Johnson, the former two-time Super Bowl champion coach of the Dallas Cowboys tearfully receive the news he has been selected to the Pro Football Hall of Fame.

If you are a college football fan, you also should know Johnson also won a national championship as a player at Arkansas and as a coach at Miami on his way to the College Football Hall of Fame.

Jimmy Johnson is, in a word, accomplished.

But what you might not know is that, early in his career, Johnson spent a season coaching in Mississippi at Picayune High School. This was 1966 – a year that produced a strange line on Johnson’s otherwise sterling coaching resume. The same coaching resume that includes a perfect 12-0 record one year at Miami and a 13-3 record one year at Dallas also includes a perfectly imperfect 0-10 record at Picayune.

Johnson was one year out of Arkansas, where he was an all-star nose guard. He had his sights set on coaching in big-time college football. So, why Picayune?

Johnson had thought he had a job lined up at Florida State and then it fell through at the last minute. Johnson and his wife had one small child and another on the way. He badly needed a job. Johnny Majors, who had been an assistant coach at Arkansas, helped him land one at Picayune, which was then a small school playing in the mighty Big Eight Conference. Picayune had been 0-10 two straight seasons and Johnson would be there for a third.

Picayune’s football existence, at the time, seemed to be to provide homecoming fodder for the likes of Biloxi, Gulfport and Hattiesburg. The Picayune Maroon Tide was so bad the school’s annual did not even record the football scores.

Said Derwin Bales, a junior linebacker and probably the best player on that 1966 Picayune team, “It wasn’t unusual for us to get beat 40-something or 50-something to nothing. We got our rears kicked a bunch.”

Bales was watching Sunday when Johnson was told he had been voted into the Pro Football Hall of Fame.

“He got pretty emotional,” Bales said. “Must have meant a lot to him. I never saw him get like that at Picayune. He didn’t get teary-eyed back then. He just got mad.”

Bales said Johnson wore his hair in a “flat top” back then. “He didn’t have that pretty long hair, with all that hairspray, back then,” Bales said.

“He was just real hands-on, real fired-up all the time,” Bales said. “He was a good coach. He just didn’t have much to coach. Heck, he could run backward faster than most of us could run forward.” 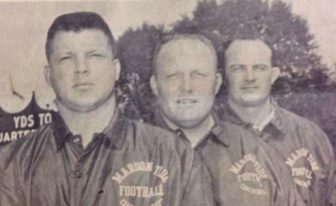 Jimmy Johnson, left, is pictured with Buck Kennedy, center, and Frank Skipper. They were the 1966 Picayune High football staff.

Frank Skipper was the Picayune head coach at the time. Buck Kennedy, who would go on to a Mississippi High School Coaches Hall of Fame career, was the other Picayune assistant. Both Skipper and Kennedy have died in recent years but both remembered Johnson in interviews after the Cowboys’ 1993 Super Bowl victory.

Johnson had plenty chances to say it that 1966 season.

Kennedy, who later became a legend as Noxapater’s head coach, remembered Johnson being years and years ahead of his time as a high school assistant coach. He said Johnson would watch film hour after hour in preparation for a game and make an index-card file of the upcoming opponent’s offensive tendencies. Now, coaches use computers to do the same thing.

“Jimmy knew what they were going to run, depending on down and distance and where they were on the field,” Kennedy said. “Didn’t matter. We still couldn’t stop them.”

Said Kennedy, “Jimmy was watching film in the office early in the morning when when we got there and he was still doing it that night when we left. And every time I walked in on him, he’d say, ‘This is the worst I’ve ever seen.’”

Once, at practice, Johnson didn’t like the effort the team’s biggest player was displaying. Bales still remembers.

“Coach Johnson of course didn’t have a helmet or pads on but he got down there in a lineman’s stance and told the big guy to fire-out at him, which he did,” Bales said. “Well, when he did, Coach Johnson hit him in the helmet with a forearm shiver. Knocked him out cold. I mean, cold. He probably didn’t do that with the Cowboys.”

When the 1966 Picayune season ended, Johnson got a job as an assistant at Wichita State. From there he went to Iowa State and then Oklahoma and he was on his way to fame, fortune and no more 0-10s.

Back in 1966, at Picayune, football legend Jimmy Johnson saw worst he had ever seen