Voting boards at the front of the chamber are illuminated as House members vote on legislation.

In 2015 Jim Hood garnered 55.4 percent of the vote and won 66 of the 122 House districts in defeating current Southern District U.S. Attorney Mike Hurst to capture his fourth term as the attorney general of Mississippi.

Winning a majority of the popular vote and the most votes in a majority of the House districts ensured that the Democrat Hood’s election would not be decided by the Republican-controlled House of Representatives.

According to Jonathan Rodden, a political science instructor and the director of the Stanford Spatial Social Science Lab, Hood needs to win the popular vote by a similar margin on Nov. 5 in his race for governor against Republican Lt. Gov. Tate Reeves to again guarantee the election is not thrown into the House.

Rodden wrote in an analysis filed in U.S. District Court for the Southern District of Mississippi that the Democratic candidate (or black-preferred candidate) “would need more than 55 percent of the statewide vote in order to secure a majority of electoral (House) votes. Candidates preferred by whites, by contrast, would be able to win the electoral vote without winning a majority of the popular vote.”

Rodden, who studies census and polling data, further stated that had Hood’s margin of victory been 2 percent less in 2015 against Hurst, he most likely would not have won a majority of the House districts, thus throwing the election to the House members to decide.

Mississippi is the only state that requires candidates for statewide office to win a majority of the popular vote and the most votes in a majority of the House districts or electoral votes. If a candidate does not achieve both thresholds, the election is thrown into the House to decide between the top two vote-getters.

The provisions, called the electoral junior college by some, have not been a factor in recent elections because, except for the office of attorney general, Democrats have not fielded many competitive statewide candidates.

A federal lawsuit filed by the National Redistricting Foundation and the Mississippi Center for Justice on behalf of four black Mississippians is asking that the provisions be thrown out of the state Constitution because they dilute minority voter strength.

The evidence is indisputable that the provisions were placed into the 1890s Mississippi Constitution to ensure no African American, then the majority population in the state, was elected to statewide office. At the time, the white establishment configured the House districts in a manner to ensure that whites always controlled the House, which was described at the time as “the legal basis and bulwark of the design of white supremacy in a state with an overwhelming and growing negro majority.”

Now the provisions make it more difficult for black-preferred candidates or Democrats to win statewide office. Remember, Mississippi is generally the most racially polarized state in the nation in terms of elections with about 90 percent of black Mississippians voting for the Democrat and, generally speaking, white Mississippians vote at about the same level for the Republican, though, in four elections for attorney general Jim Hood has been the exception to that rule. 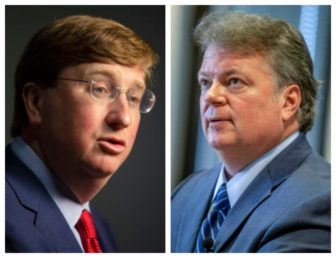 Lt. Gov. Tate Reeves and Attorney General Jim Hood face each other in the Nov. 5 general election for governor.

The 2015 election was Hood’s closest. And still, by most measures, garnering 55 percent of the vote would be considered winning by a near landslide. Yet, in nine House districts, Hood won with less than 52 percent of the vote. If a few votes had been changed in those districts, the election could have gone to the House for the representatives to decide.

It is interesting to note that both Reeves and Secretary of State Delbert Hosemann, who is running for lieutenant governor, have refused to say they would not contest the election in the House if their Democratic opponents won the popular vote, but did not capture the most House districts.

Hood would need to win 55 percent of votes to keep the House from deciding race, statistical analysis claims