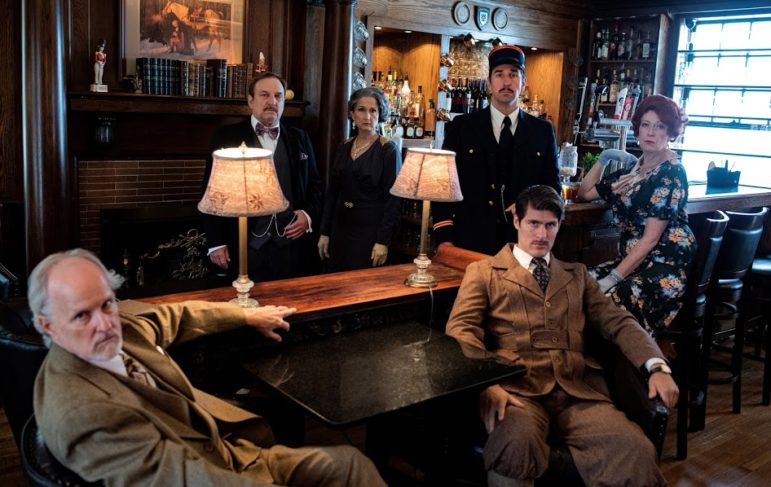 When Agatha Christie’s best-selling whodunit comes to the stage, howdunit might be just as teasing a mystery.

“Murder on the Orient Express,” with its famous luxury train, exotic first-class passengers and intrepid Belgian detective Hercule Poirot, is her most popular book. Intricacies and intrigue on the page — that’s one thing. Putting it on the stage at New Stage Theatre requires a whole other track of wizardry.

Be delighted, but not distracted. To ignite little gray cells and follow in Poirot’s patent leather footsteps, “Watch every move and listen to every word,” says director Peppy Biddy.

“There are clues sprinkled in that the average person might let go to the wayside,” not just in words, but in actions and reactions, says Jonathan C. Whitney, in role of Colonel Arbuthnot.

“Murder on the Orient Express,” a brand new dramatic comedy adapted from Christie’s novel by award-winning playwright Ken Ludwig (“Lend Me a Tenor,” “Crazy for You”), has its southeastern regional premiere at New Stage Theatre, Oct. 22 through Nov 3.

The play trims the train passenger list to eight in the cast of a dozen total. They present an international array, with actors strapping on dialects that include Belgian, French, Russian, Swedish, British, Scottish, Hungarian and Minnesotan. And, as Poirot says, “They are all characters.” Ludwig also added a couple of twists, Biddy says, “which I won’t give away, that distinguish it as its own play.”

“It will still be an exciting evening in the theater because we have a train on stage,” Biddy says, dangling that morsel and declining to say more. Discussions began with scenic designer Dex Edwards as far back as June to create a set to suit the story. “That’s the way the play works — the fact that they’re in these compartments, and that they connect, and that they can’t get out of them.”

The story’s journey, not just its destination, is a draw, says New Stage artistic director Francine Thomas Reynolds. “It doesn’t matter if you know whodunit. It’s so fun to watch that character figure it out, and the process of how Poirot’s mind works. It’s set in 1934. Today, it’s all DNA. Back then, it had to all be done by deduction.” 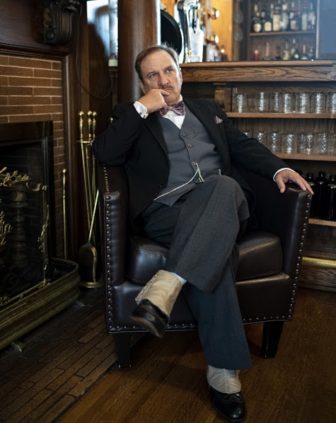 Bill Ford Campbell has the role of Poirot. Long a big mystery fan, he’s most familiar with the detective through David Suchet’s portrayal over more than 20 years in the British TV series that aired on PBS. “That’s the Poirot I grew up watching. But … when you’re in the four corners of a play, you operate within those parameters. … You have to be more active. You have to be a little more exuberant than some people might play Poirot, because you’re on the stage.”

Hallmark characteristics remain. “He’s small,” says the 5-foot-7 Campbell. “In the books, he’s funny-looking. His head is shaped like an egg. He’s supposed to have a curly mustache. … I would describe him as kind of OCD — he’s very neatnik and very detail-oriented. Very analytical. And, very eccentric, but with some humor and some charming qualities at the same time — not quite as cold as Sherlock Holmes, let’s put it that way.”

From Poirot’s formal, sophisticated speech, to his active curiosity and hyper-awareness, the character is indelible. “He doesn’t miss anything,” Campbell says. “It’s like he’s got a slot in the top of his head, and things he just hears, he remembers. Then he’s able to somehow, magically … put things together that other people would miss.”

Intriguing passengers range from the volatile, brute force of Whitney’s stern Arbuthnot to the tacky American tourist facade of Helen Hubbard, played by Laurie Pascale. “Whatever we say, ‘Oh, don’t do that when you’re traveling abroad, don’t act like that,’ she does,” Pascale says, hinting at the part’s complex nature.

“In this show, there are so many different layers,” she says, hoping that when the mystery is solved and the show is done, viewers can savor the richness, “kind of like a croissant — if you knead it properly with the butter, you’re going to have layer after layer after layer.” Roll in the opulence of luxury train travel — “as foreign as the accents” — with the period setting in 1934 and “from history’s perspective, what was brewing at that time,” for a compelling treat.

Romance, tragedy, morality, murder and humor all have a first class seat. The perfect mystery percolates, with a train full of suspects, each with an alibi, “and there’s not a butler on board,” Campbell says with a sly laugh.

Sherry Lucas is a veteran feature writer in Jackson whose stories spread the word on Mississippi's food, arts, culture and communities. A lifelong Mississippian and University of Mississippi graduate, Lucas has decades of daily newspaper experience. She is now a freelance writer and contributes regularly to Mississippi Today.

How to Train Your Mystery: ‘Orient Express’ opens at New Stage Theatre