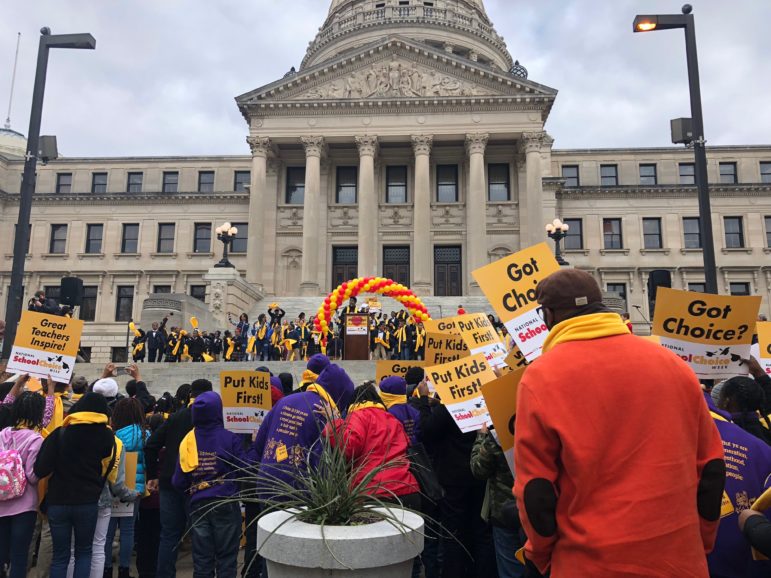 As legislative leaders worked Friday morning to garner votes on a budget bill that contained a $2 million surprise for a private school education program, they did so with the knowledge that the bill also contained $27.3 million for 70 projects in districts throughout the state.

In the Senate, Appropriations Chair Buck Clarke, R-Hollandale urged his colleagues to send the bill on to the governor that morning, as it was the last item to take up before the conclusion of the legislative session.

In reality, legislators could have easily sent the bill back for further negotiations. The controversial language providing an additional $2 million for the Education Scholarship Account (ESA) program had been tucked into the agency budget bill in the final hours of the legislative session. Lawmakers could have voted to remove the language just as quickly.

A day earlier, lawmakers had been shocked to find out they had voted to send millions to the controversial voucher program that uses public dollars to send children with special needs to private schools. The $2 million had been wedged in among allocations for public school cafeteria repairs and roads improvements.

Lt. Gov. Tate Reeves offered no apologies for inserting the language into the bill. He said it would eliminate the waiting list of special needs students wanting to get into private schools.

“I don’t know if pushing for this is good for me politically,” Reeves said. “But quite frankly, I don’t care. I got elected to do what is right.”

Despite many lawmakers opposing the program, many took Clarke’s initial warning about killing the bill to heart.

Sen. Chad McMahan, R-Guntown, said he was afraid to vote against the bill on Friday because it could jeopardize funding that the bill also provided for projects in his district. He said he opposed the ESA program, “but nobody gets everything they want.”

McMahan admitted, though, he did not know the money for the private school program was in the legislation when he voted for it. The bill passed on the Senate floor Thursday night in one minute.

Rep. Jerry Turner, R-Baldwyn, also said he did not know the language was in the bill.

When asked if he was upset about that, he replied, “I am not okay with shutting down government and that is what will happen if you shut down DFA.”

Turner was reasoning that if the bill were not sent to the governor, it would die. And since it was the budget bill for the Department of Finance and Administration, the state’s fiscal agent, government would shut down if it was not funded. 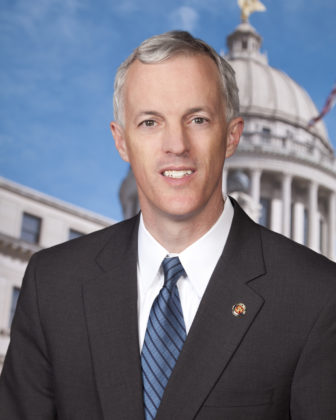 But as Sen. David Blount said, regardless of the issue of the private school funding, the real problem was a matter of trust.

“We have to rely on each other (for information) as we take a vote,” said Blount, D-Jackson. And it was clear most members did not know about the language in the bill, he said.

In the House, it took three tries to send the bill off to the governor. Each time, a handful of Republican representatives went from opposing the motion to voting in favor of it with a final 55-51 vote.

Although the funding came as a surprise to most, since efforts to expand or change the program died earlier this session, funding for private school vouchers has been an important issue of Empower Mississippi. The influential lobbying organization has donated hundreds of thousands of dollars to conservative lawmakers in Mississippi since 2015.

That year the organization’s PAC unseated four incumbent Republican lawmakers in DeSoto County, all of whom had previously blocked a charter school bill from passing out of a key House committee. The PAC spent around $100,000 on the campaigns of Republican Reps. Dana Criswell, Dan Eubanks, Ashley Henley and Steve Hopkins, each of whom ran on the umbrella issue of expanding “school choice” in Mississippi.

But no lawmakers have benefited from Empower’s largesse as much as Lt. Gov. Tate Reeves, who has received $45,000 from the organization since 2015. 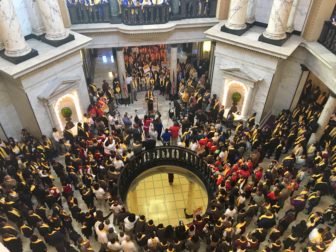 Students, parents and advocates fill the Capitol rotunda on “school choice” day. Public school advocates, who had a rally planned a few weeks later, say they were denied the opportunity to hold their rally inside the Capitol.

The favor these donations have curried with leadership was on display during a boisterous 2018 school choice rally which gathered school choice advocates and hundreds of students in the Capitol rotunda, despite rules restricting such events to a press conference of no more than 25 persons. After Mississippi Today discovered that leadership had told a group of Jackson-based public school advocates that the 25-person rule would be strictly enforced for their event, Republican leadership admitted “the optics are bad, but the policy is good” and began enforcing the policy for all groups.

While school choice advocates are rejoicing over the additional funding added to the program, traditional public school advocates are outraged.

“Sneaking it in the back door is not the way we should do business in Mississippi,” Mississippi Association of Educators president Joyce Helmick said Friday on Mississippi Today’s The Jungle Podcast.

“We’re teaching students to be up front and honest with each other. And then we send adults – and we elected them and sent them – and they are sneaky as top-notch bullies,” Helmick said. “When you sneak something through in that manner, that’s being a bully, which is what we’re teaching our students not to be.”

Not all are upset by the move.

A December legislative report states that as of June 2018, 197 students were on a waiting list to get into the program.

“Because many of the ESA participants from the previous school year will continue to participate in the program, and the number of available education scholarships is limited, there are few available to new applicants,” the report said.

Empower president Grant Callen said in a statement the additional funding is a “tremendous victory” for parents who are on the ESA program waitlist.

“It’s a testament to the power of moms across the state who raised their voices, who told their stories, who got engaged in the political process, and who made sure their elected leaders understood that they had been wait-listed,” Callen said.

Tylertown parent Alice Dillon said she hoped the additional funds would allow her son to be taken off the waitlist.

“I take my hat off to Tate Reeves for fighting our battle today,” Dillon told Mississippi Today. “I’m a Democrat but I support what he did.”

Dillon’s 10-year-old son Demyrion has medical conditions caused by a gene mutation that makes education in a standard school setting incredibly difficult. Dillon said she pulled her son out of the Walthall County Public School District in 2016 and applied for an ESA scholarship.

Since then, she’s been homeschooling him as he has been put on the waitlist multiple times.

“He learns different than other kids,” she said.

If her son is taken off the waitlist, Dillon said she’d consider moving to a town with private schools that could accommodate him, or use the funds to help pay for an online program.

Despite opposition, Legislature wraps up session by approving $2 million in voucher funding