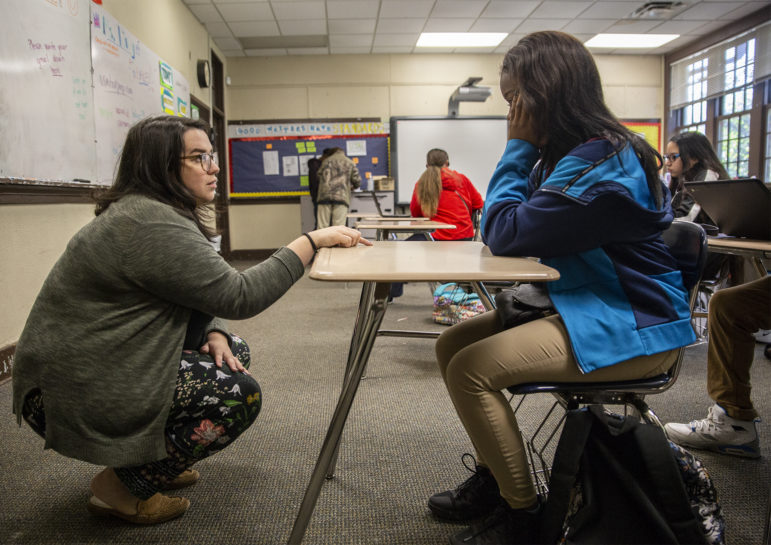 West Bolivar High School teacher Laura King, who also is a part of Teach for America, talks to a student during class Monday, October 29, 2018.

Insufficient. A slap in the face. Insulting.

These are the words educators and advocates use to describe a $1,500 pay raise the Mississippi State Legislature approved Thursday.

Currently teachers in their first year who hold a bachelor’s degree earn $34,390 without any district supplements. The average salary for a public school teacher was $44,926, during 2017-18 school year. 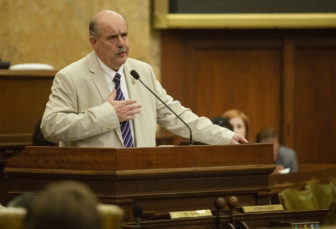 In the House, education chairman Rep. Richard Bennett was frank when presenting the bill on the floor.

“It’s not where we want to be, it’s what we can do,” the Republican from Long Beach said.

Mississippi Association of Educators president Joyce Helmick said the whole process has been insulting and “a telling display of exactly what state leadership thinks about Mississippi’s teachers” and public school students.

“We see this for exactly what it is: another election-year-timed symbolic gesture,” Helmick said. “And to those who chose not to stand with Mississippi’s educators: Please know we won’t forget this betrayal come November.”

Lawmakers voiced support for a teacher pay increase prior to the session but the amount waffled as the bill made its way through the legislative process. Originally, the Senate bill called for a $1,000 raise disbursed over two years. The House amended the bill to increase the raise to $4,000 paid out over two years.

Once the bill made it to conference, where lawmakers meet in private to work out the details of a bill and later present a report to respective chambers, the legislation was amended once more. What lawmakers voted on Thursday was a $1,500 raise paid out in one year for teachers and assistant teachers, who currently make $12,500.

Rep. David Baria, D-Bay St. Louis, and Sen. Derrick Simmons, D-Greenville, each tried unsuccessfully in their respective chambers to recommit the bill to work out a higher raise amount, but did not have the votes. Republicans warned that if they did that the bill may die altogether.

“We have an unfolding crisis in public education in Mississippi because the men that run our state have not made public education a priority,” Baria said during a news conference Wednesday.

The bill passed out of the House with an 88-27 vote. In the Senate, the bill passed 46-2, with Democrat Sen. Sollie Norwood of Jackson and Simmons voting against it.

“I support teacher pay raises, I just don’t think its sufficient,” Simmons said after the vote. 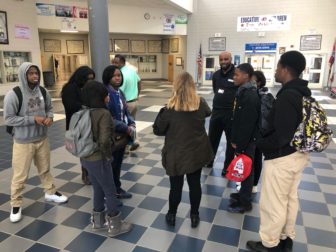 Clarksdale High School Clarence Hayes gets an update from Kaitlyn Barton (center) on her students’ voting project last fall. Hayes said Thursday that if lawmakers could spend time in teachers’s shoes they’d realize that $1,500 is a “slap in the face.”

“It’s already hard to attract teachers to the Delta,” Stanton said. “It’s not sufficient in any shape, form or fashion. And even with a few dollar raise they get, when it comes to insurance, taxes and everything else they’re not grossing any money.”

Clarksdale High School principal Clarence Hayes described the raise as “a slap in the face.”

“What (lawmakers) need to do is spend a day in a teacher’s shoes … to see what they go through in a day’s time,” Hayes said. “That way when they go back to make legislation and laws, then they’ll actually know what we go through on a day-to-day basis, so then they’ll know $1,500 isn’t worth what they’re giving us.”

While the pay raise is bigger than what was first proposed by Gov. Phil Bryant in his budget plan and bigger than what originally was passed earlier in the session by the Senate, it was significantly smaller than past salary increases approved in earlier legislative sessions.

In the 2000 session, the Legislature passed a multi-year $337 million plan that was supposed to move Mississippi teachers to the Southeastern average when fully enacted.

But by the time the enactment was completed in six years, the Southeastern average had increased, though, the state had moved closer to that elusive target.

In the 2014 session, the current legislative leadership passed a two-year plan increasing teacher pay $1,500 the first year and $1,000 the second year. That plan cost about $100 million when fully enacted.

The bill that passed Thursday now goes to the governor for his signature.