I have on my desk a perfectly preserved game program from the Mississippi State-Ole Miss football game played Nov. 24, 1945. On page 1, it tells us about school colors: “For Ole Miss, Red and Blue; for Mississippi State, Maroon and White.”

That hasn’t changed. Most everything else has. With the 2020 college football season about to begin, let’s take a look back…

We begin with the price of the program: 25 cents. Compare that to the $10 an Egg Bowl souvenir program from last November. That’s an increase of only 4,000 percent.

Then, as now, you find the lineups in the foldout of the program’s middle two pages. Yes, but the lineups back then were sponsored by Chesterfield cigarettes “for more smoking pleasure.” Besides giving you the starting lineups, the centerfold also gave you photos of three smiling, cheerleader-looking women giving you the ABC’s of the Chesterfield brand: “A, always milder; B, better tasting; and C, cooler smoking.”

Compare that to the back page of ad from Philip Morris, “America’s FINEST cigarette.” You could not make this up. The ad tells us that “Phillip Morris’ superiority is recognized by eminent medical authorities.” And that, “This finer-tasting cigarette is also far more considerate of your nose and throat, scientifically proved far less irritating to the smoker’s nose and throat…”

Granted, it says nothing about what those “finest cigarettes” did for your lungs.

Toward the back, there’s another ad for Old Gold cigarettes with still a different pitch. “Why be irritated?” it asks. “Apple honey helps guard Old Golds from cigarette dryness.”

Full disclosure: The program also contains several ads for milk, including one from Pyron’s Dairy on College Drive. “Milk is health,” it tells us. “Milk, you know, has long been a must item on training table menus of the leading football teams – because milk gives the gridiron greats the sturdy bones, radiant health and vital energy they need.”

Seems to this observer both teams should have consumed lots more milk, and not skim milk. The heaviest player on the State roster was 215-pound tackle S. J. Carroll of Greenville. The current Bulldogs have running backs and wide receivers who weigh more. Only six of 41 Bulldogs listed in 1945 weighed in at 200 pounds or more. 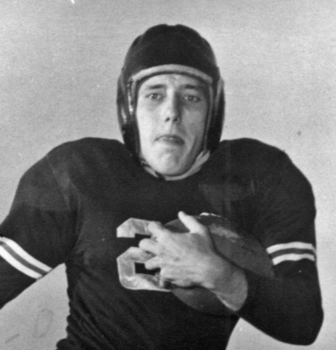 Harper Davis, as a Chicago Bear.

The heaviest Rebel was 210-pound tackle Joe Gary of Byram. Gary was one of two Rebels who went 200 pounds or better. Center Charles Sinopoli of Gulfport was all of 5 feet, 8 inches and 160 pounds. Today’s Rebels don’t have male cheerleaders so small. Middle school lineups have much larger linemen th

ese days. Just about any present Class 6A high school team these days would outweigh those Rebels and Bulldogs by 70 pounds a man across the lines.

And those 1945 rosters are dotted with future Mississippi Sports Hall of Famers. Those Rebels included 180-pound lineman Roland Dale and 190-pounder Bernard Blackwell, future coaches and administrators. One of the Bulldog running stars was Harper Davis, the future Millsaps coach, who weighed 170 pounds, wore number 43 and could fly. 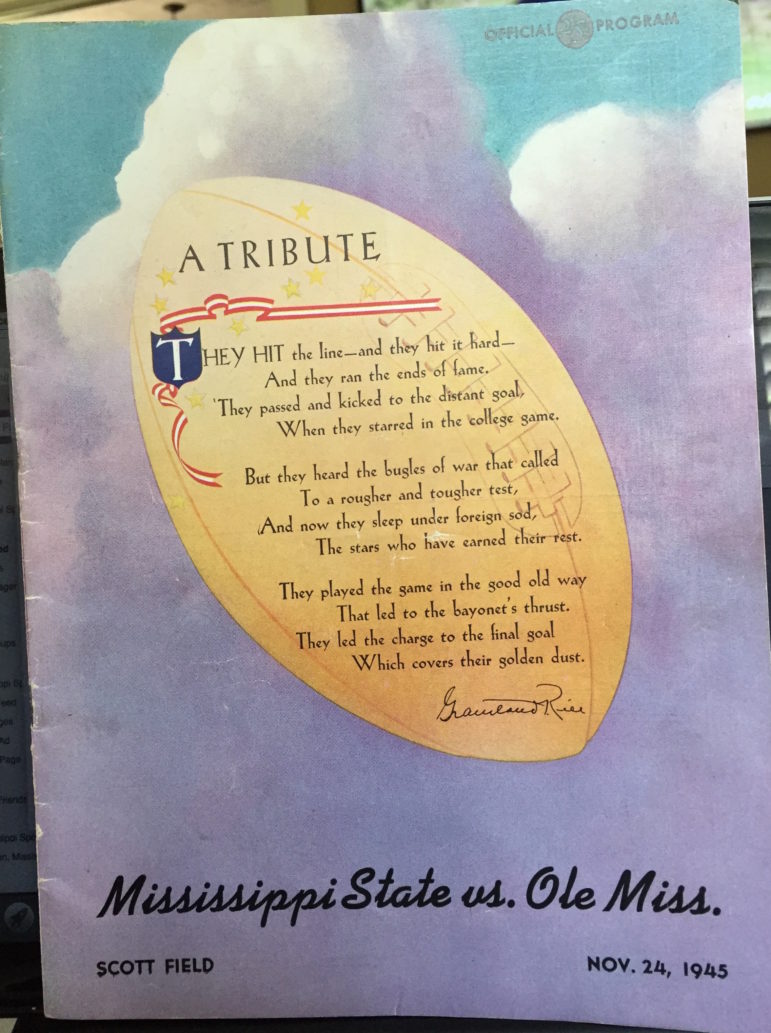 Interestingly, there’s an ad for the midnight show at the State Theatre later that night. The featured film – “Hitchhike to Happiness” – starred Al Pearce and Dale Evans. Evans was 13 months from marrying Roy Rogers, who would be her fourth and final husband. Ernie Pyle’s “Story of G.I. Joe,” starring Burgess Meredith, was scheduled to start on Monday. There were no movies on Sunday, of course.

Remember, this was Nov. 24, 1945, roughly three months after the Japanese surrender in World War II. The program’s cover featured a poem from the famed sports writer Grantland Rice:

They hit the line – and they hit it hard –

And they ran the ends of fame.

They passed and kicked to the distant goal,

When they starred in the college game.

But they heard the bugles of war that called

To a rougher and tougher test,

And now they sleep under foreign sod,

The stars who have earned their rest.

They played the game in the good old way

That led to the bayonet’s thrust.

They led the charge to the final goal

Which covers their golden dust.

The 1945 Egg Bowl program includes just about everything, except, of course, the final score. The Rebels won 7-6, an upset, one of only two Ole Miss victories that season, compared to eight for State.

Cigarettes, milk and poetry: Much different times in Ole Miss and State football