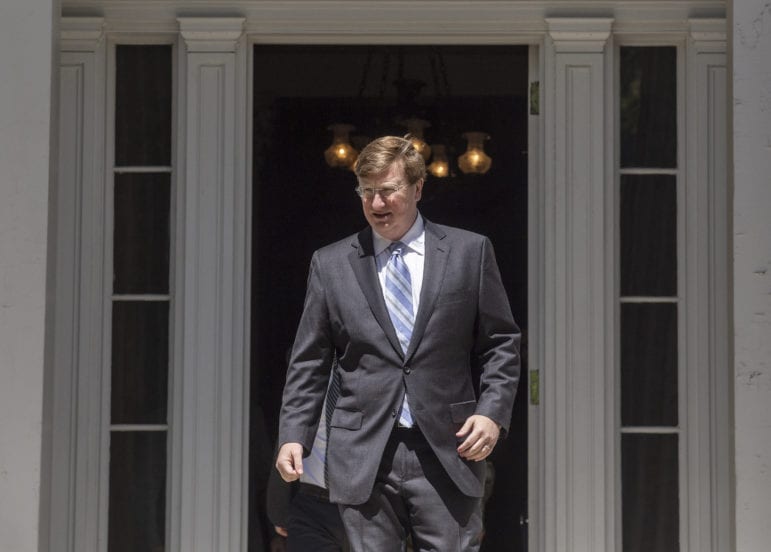 Gov. Tate Reeves walks out of the Governor’s Mansion in Jackson, Miss., Thursday, March 26, 2020, as he prepares to speak to media about the coronavirus during a press conference.

As students are set to return to classrooms later this week and Mississippi becomes one of the nation’s most dangerous COVID-19 hotspots, all eyes are turning toward Gov. Tate Reeves, who is expected to announce a decision this week about whether to allow schools to reopen.

Reeves’ aides say the governor spent the weekend personally assessing reopening plans of the state’s 138 public school districts, which had to submit proposals to the state by Friday. The districts, thus far, have been given free rein to decide for themselves how and when to reopen, and most have opted to resume in-person instruction within the next week.

But last week, Reeves suggested he could delay the reopenings with a statewide mandate after reading the districts’ plans — which he’s been doing while on an out-of-state trip.

“He’s with his family on the coast — avoiding crowds and poring over the school reopening plans,” Parker Briden, Reeves’ deputy chief of staff for external affairs, said in a text message on Saturday. “He brought a binder about a foot high with all of our school districts’ plans — 598 pages in total — to read through while spending a few secluded days with his girls before they return to school.”

Briden said the governor also spoke with Vice President Mike Pence this weekend about school reopening plans and the coronavirus relief package being negotiated in Washington. Asked to address why Reeves was out of the state while such a consequential decision looms, Briden added: “If you’d like to know what he has for dinner, I can report back once he is done!”

Mississippi currently has the highest COVID-19 positivity rate in the country and the third-highest daily new case rate. COVID hospitalizations continue to rise, and the daily patient rolls nearly doubled in the past month. A recent report from George Washington University shows Mississippi is one of 11 states either at or nearing a shortage of ICU providers.

Reeves allowing Mississippi schools to reopen would send more than 465,000 students, more than 30,000 teachers and thousands of other school staffers back to the classrooms this months. Education advocates say already cash-strapped school districts can’t handle the demands of virus preparation and warn that students, teachers and staff will suffer. Health experts say allowing schools to reopen now will further strain the hospital system.

State Health Officer Dr. Thomas Dobbs in a video session on Friday with the Mississippi State Medical Association said he believes in-person school reopening should wait, at least until September.

“I was off,” Dobbs said in the video. “I thought maybe it would be the right time to start in August — until about a little while ago… I think it’s a good idea to delay school. There’s nothing magic about August.”

The president of the Mississippi Association of Educators, the state’s teachers union, addressed a video to Reeves on Monday morning, pointedly asking him to delay the start of school until early September.

“Gov. Reeves, I am a second grade teacher, a public school advocate and a mom,” Jones said in the video. “I am asking you to keep our students, our educators and our communities safe by keeping school buildings closed until after Labor Day… Please understand, regardless of the decision you make this week, schools will eventually close. Those closures can happen safely now, with a comprehensive plan in place, or it can happen when the first outbreak happens, or when the unthinkable happens and we lose a member of a school community.

“This is quite literally an issue of life or death, and the ripple effects of this decision will be felt far beyond the confines of a school building,” Jones said on Monday.

Dobbs said the Health Department is also going to “recommend universal masks in schools for all age groups” and said he believes classes should have no more than half their normal capacity of students.

Dobbs said he has has reviewed school reopening plan summaries and been dismayed by some.

“A lot of them just say traditional school,” Dobbs said. “Believe it or not, ‘We’re just going back to school,’ which to me is wholly unacceptable. It’s crazy.”

“It’s impossible to imagine we are not going to pay the price for cramming kids into schools right now,” Dobbs said.

In recent days, Reeves has publicly warned of the dangers associated with children not returning to the classroom. Many parents are worried about how they’ll keep their jobs or handle childcare if their kids don’t start school on time. Parents and teachers alike have expressed concern over students’ wellbeing if they miss school and in-person interaction in a rural state where many districts lack the ability to provide adequate distance learning.

“The reopening of schools in this environment is a major challenge. I understand that,” Reeves said in a press conference on Thursday. “But to those individuals in our state who say the public health of the spread of the risk of the coronavirus is the only risk at play when making a decision about our schools are ignoring so many other risks that exist out there.”

Reeves continued: “We know that we are not going to mitigate 100% of the risk on either side of this equation. What we must do is look for innovative ways to reach what we all believe is the right outcome. And the right outcome longterm for kids is that they are in an environment that is loving and produces and provides an educational opportunity.”

As he weighs the schools decision, Reeves is also drawing scorn for not issuing a statewide mask mandate, as most other states have done, and Mississippi’s COVID statistics continue to worsen. As of Friday, Mississippians in 37 of the state’s 82 counties — representing more than half of the state’s population — were required to wear masks in public because of an executive order from Reeves.

Several medical professionals and local politicians have questioned why Reeves has ordered mask mandates for individual counties that are already seeing spikes in cases rather than being more proactive with a statewide mandate and stopping the virus spread before it begins.

Lt. Gov. Delbert Hosemann is serving as the state’s acting governor as Reeves remains out of state — the typical process spelled out in state law.

Will Gov. Tate Reeves make a decision on schools this week? Teachers and parents are waiting.