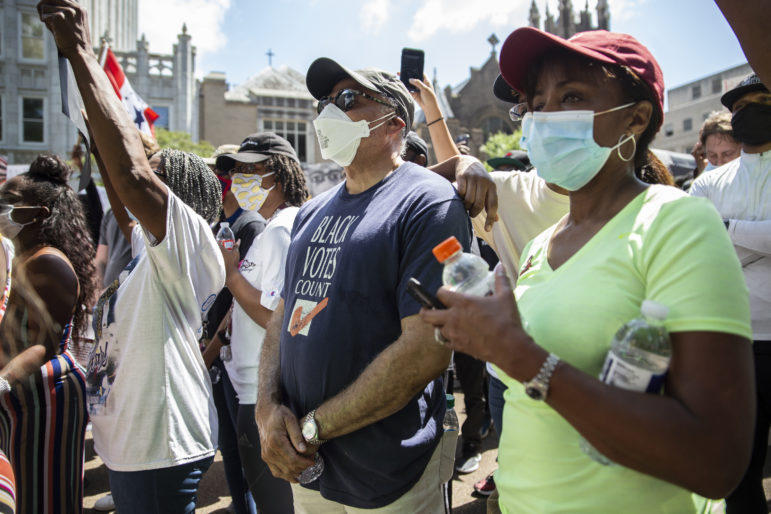 Jarrius Adams, a 22-year-old Mississippi activist, looked over the crowd of at least 3,000 people gathered in downtown Jackson on Saturday for a Black Lives Matter protest and grabbed the microphone.

Adams welcomed the politicians who were in attendance but quickly requested that if they were approached by the media, they should refer questions to the young people — all in their late teens and 20s — who organized the massive event.

“We, our truth and voices must be the focus of this narrative we are crafting,” Adams said.

Standing about 15 feet from the stage was Mike Espy, the 66-year-old Democratic nominee for the U.S. Senate election this November. When Adams made the request, Espy looked over at a reporter and appeared to smile behind his mask and shrugged his shoulders as if to say he was there for the protest, not the media.

When Espy announced last year that he would again challenge Republican Sen. Cindy Hyde-Smith after losing to her by eight points in a 2018 special election, he said to be successful this year he had to attract more young voters to the polls.

Espy must have viewed Saturday as a step in achieving that goal. Espy’s strategy, he has said, is not only meeting and engaging young voters on the issues of today, but tying his history to their goals.

On Saturday, many protesters wore Black Lives Matters t-shirts and other attire highlighting the current issue of the police brutality that many contend is unfairly affecting the African American community.

Espy, who donated drinks and protective gear to the protest organizers, wore a blue T-shirt proclaiming “Black votes count.” It was a shirt from his historic 1986 campaign when Espy, a Yazoo City native, became the first African American elected to the U.S. House from Mississippi since the 1800s.

Before his Senate race in 2018, Espy had not been on the ballot in Mississippi since 1992. He served as secretary of agriculture during a portion of Bill Clinton’s first term as president. Other than that, Espy had been practicing law primarily in the Jackson area before he jumped back into politics in 2018.

“The millennials did not know me (in the 2018 election.) It was clear,” Espy said when he announced he would challenged Hyde-Smith again.

While Espy might not have literally spoken to that younger generation on Saturday, he said he hopes he figuratively did as he marched in the protest from the Governor’s Mansion to the state Capitol and back.

“Our young people led this protest with love, energy and a momentum for change that makes me hopeful for the future of our state and our country,” Espy said.

While no politician spoke at the event, Adams and other organizers did urge attendees to vote. The November election was a focus of the event, and several organizers walked among protesters with voter registration forms.

“We must vote in November, or none of this means anything,” Adams said, inspiring seeming nods of approval from Espy, his wife Portia, and others standing near them.

Espy invited Hyde-Smith to join him at the protest. The incumbent senator did not respond, though she has commented on the event that spurred the protests – the death of George Floyd, a black man who was killed by a white police officer who pressed his knee into Floyd’s neck for almost nine minutes in broad daylight on a Minneapolis street.

“The civil unrest following the tragic and senseless killing of George Floyd in Minneapolis adds to our nation’s burdens in these unsettling times,” Hyde-Smith said in an earlier statement. “Americans are right to voice their objection to police brutality and lawless violence. The anarchy and rioting occurring around the country only overshadows and diminishes the peaceful protests and ongoing national struggle for equal justice and equal protection of the law.”

She continued: “The past few months have not been easy for our nation and the road ahead remains long. I know we will keep the faith and do what needs doing to stay safe, rebuild the economy, and overcome the challenges ahead of us.”

After Hyde-Smith did not attend the protest on Saturday, Espy criticized her in a tweet.

“(Hyde-Smith) said nothing of the protests,” Espy wrote. “Her silence shows Mississippi that she stands by her past comments supporting public hangings, voter suppression, and old symbols of hate.”

Espy was referring to Hyde-Smith’s 2018 comments, which caused nationwide controversy, in which she was only using a figure of speech when she said she had so much respect for a political supporter that she would be on “the front row of a public hanging” if he invited her.

On the 2018 campaign trail, Hyde-Smith also suggested that it might be a “great idea” to make it harder for some people to vote. Her campaign said both comments were made in jest, but national headlines garnered Espy hundreds of thousands in contributions, and several national corporations asked Hyde-Smith to return their previous campaign contributions.

Espy must not only garner the traditional Democratic voters as he did for the most part in 2018 and attract new young voters, both minority and white, but he also must do better with more traditional white voters. He estimated he received about 18 percent of their support in 2018.

On Saturday, Espy during a short interview said he was at the rally because of the “disproportionate” amount of violence directed at minorities by some law enforcement officers.

Asked if he had ever experienced such violence, Espy said no, though he said that he has been stopped by law enforcement for what appeared to be no good reason.

At one point, Espy whispered to his son Mike. He was asking him if it was OK to tell the story of when Espy Jr. was arrested for using profanity in a 24 hour gym at a time when only Espy, his friend and two others, one an off duty police officer, were in the gym.

Espy Jr., a former football standout at the University of Mississippi who played in the National Football League, was encouraging his friend to lift more weights at the time he used the profanity.

“He spent the night in the Ridgeland city jail,” Espy said in what appeared to be a lingering dismay about the incident that occurred around 2012. “As a dad to two young black men, it was important to me that I march alongside my sons.”