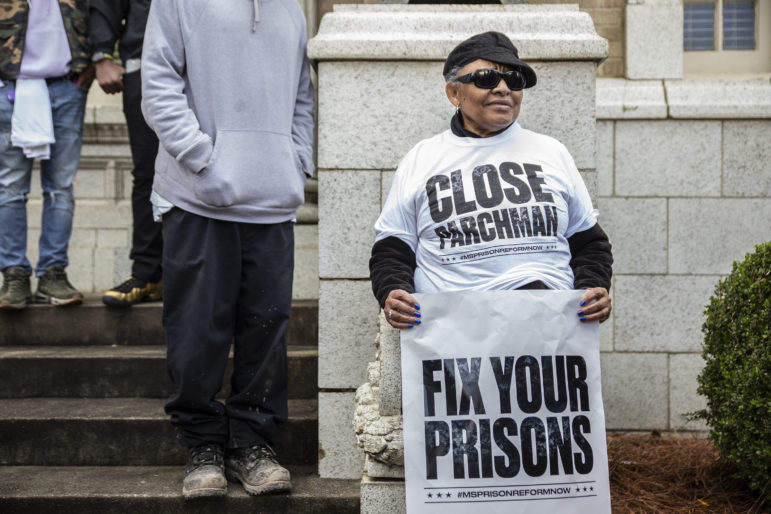 Jacquelyn Owens attends a prison reform rally in honor of her nephew, Paul Evans Jr., at the Mississippi Capitol

As various bills make their way through the legislative process that could result in more paroles and a reduction in Mississippi’s prison population – now about 19,000 – at least one proposal is being considered that some argue could impede those efforts.

It is almost as if the Legislature has a split personality as it relates to criminal justice issues.

Perhaps the most significant effort to reduce the prison population is a proposal to lessen the impact of the state’s habitual criminal laws where people receive “extreme sentences” for three convictions. Often the convictions are all non-violent. Mississippi’s habitual criminal laws have resulted in 78 people convicted solely of drug charges facing life sentences or 4,686 cumulative years in prison at a cost of $70 million, according to the conservative leaning Empower Mississippi based on statistics from the summer of 2019. Black males make up 75 percent of those convicted to 20 years or more under the habitual criminal laws.

House Judiciary B Chair Nick Bain, R-Corinth, cited the case of Tameka Drummer of Alcorn County who was convicted of a violent crime, a drug charge and then being caught with marijuana in her car now serving a life sentence.

Recently, Bain offered a bill to ease the impact of the state’s habitual criminal laws to provide the possibility of parole for those 78, Drummer and some of the 2,635 others serving sentences for habitual crimes, including more than 900 serving 20 years or more. The bill not only could reduce the current prison population, but also could result in less lengthy sentences in the future. The paroles could have a significant impact on the state budget considering the average daily cost of housing an inmate is about $50.

Bain’s bill passed the House recently with no dissenting votes and hardly any debate. Not that long ago such a bill would have faced intense scrutiny and most likely would have been defeated thanks to near unanimous opposition from Republican legislators and opposition from some of the Democratic lawmakers.

But Republicans, who now control all aspects of state government, have come to the conclusion that locking people up and throwing away the key is not always a good alternative when the costs and difficulties of running a prison system are factored into the equation.

“We have people in prison today that do not need to be there,” said Gov. Tate Reeves, who has spent much of his first months as governor dealing with rampant violence in the prison system.

In light of the violence earlier this year throughout the state prison system, there appears to be a renewed interest in passing legislation to make it easier to release people from prison. Besides Bain’s habitual criminal bill, there also is legislation being considered to make it easier for violent criminals to earn parole.

Funding might be needed to hire additional parole officers to deal with the growth in the number of parolees, officials have speculated.

But as legislators look for ways to reduce the prison population, they also are trying to resolve some of the issues they believe are negatively impacting the state. Some say the Gang Act does that by providing prosecutors the opportunity to impose enhanced penalties on crimes committed through gang activity.

If the bill becomes law, prosecutors could ask for longer sentences – up to 15 years longer – for those convicted of a crime under the gang statute and a person could be charged as a violent criminal even though the underlying crime was not violent. Some argue the money would be better spent to place anti-gang programs in schools instead of to pay for additional days of incarceration.

Senate Judiciary B Chair Brice Wiggins, R-Pascagoula, who is the primary author of the Gang Act, says the bill “gives law enforcement another tool” to deal with a problem that has impacted many communities. He says the bill is designed to focus on gang leaders and is no different than the focus the FBI has placed in past years on dealing with mob activity.

At the same time, Wiggins says he wants to pass legislation to reduce the size of the state’s prison population.

State Rep. Robert Johnson, D-Natchez, acknowledged a gang problem in certain areas of the state, but questioned the wisdom of “creating a special class of people who will face enhanced penalties.” He said people should not be locked up longer simply because of their associations.

He said the bill will negate the efforts of other proposals designed to reduce the prison population.

Such are the issues facing the Mississippi Legislature as the state grapples with how to pay for the nation’s third largest prison population.