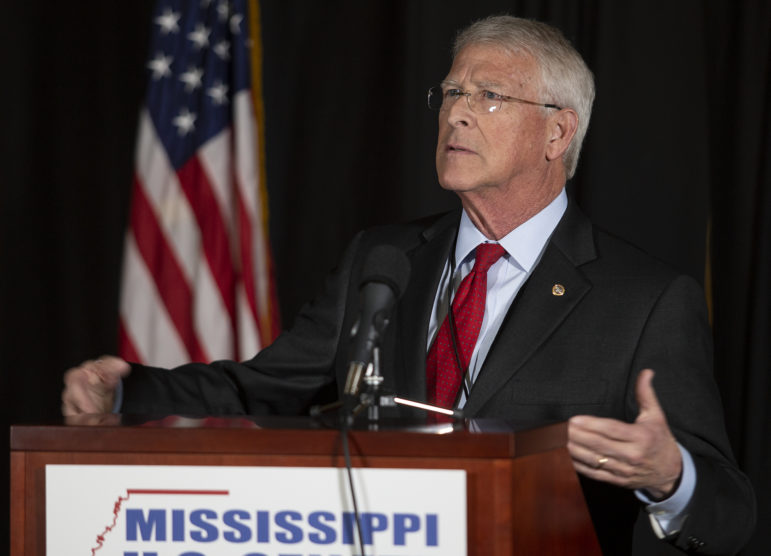 U.S. Senator Roger Wicker speaks to media on behalf of Sen. Cindy Hyde-Smith after her debate against Mike Espy inside the Farm Bureau Federation auditoriumTuesday, November 20, 2018.

After the U.S. House of Representatives voted to impeach President Donald Trump Wednesday night, the focus will turn to the U.S. Senate, which will hold a trial to determine if Trump should be removed from office.

Mississippi Sens. Roger Wicker and Cindy Hyde-Smith said in statements this week they doubted the evidence behind the charges that led to Trump’s historic impeachment on Wednesday, but they said they will listen during the Senate trial.

“I take seriously the responsibility of considering articles of impeachment,” Wicker said in a statement this week. “I will listen, and I also will be transparent. Nothing I have seen or heard during the House process comes close to an impeachable offense or warrants removing a duly-elected president from office.” 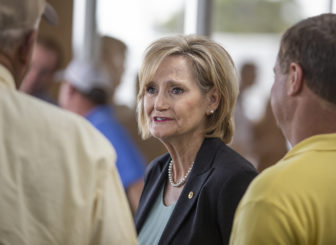 Hyde-Smith, in a statement, said: “Any attempt to remove a sitting president is a very serious matter. I’ve followed the House Democrats’ partisan hearings, but I haven’t heard or read anything regarding the charges against the president that rise to the level of impeachable offenses. Should there be a trial in the Senate, I will fulfill my duties as a United States senator.”

Trump on Wednesday became just the third president in American history to be impeached. The House voted mostly along party lines on both articles of impeachment on Wednesday evening, with most Democrats, including Mississippi Rep. Bennie Thompson, voting to impeach the Republican president. Most Republicans, including Mississippi Reps. Trent Kelly, Michael Guest and Steven Palazzo, voted against.

Representatives voted 230-197-1 on the abuse of power charge with one representative voting “present”, and they voted 229-198-1 on the obstruction of Congress charge.

“As a former prosecutor, I am confident that no court would accept these articles of impeachment as having met the standards set forth by our founding fathers,” Guest said on the House floor on Wednesday. “The impeachment articles rely almost exclusively on hearsay and opinion testimony, and they present almost no evidence of wrongdoing.”

Barring possible procedural delays from the House, all eyes will now turn to the Senate, where Trump will face trial and, ultimately, votes on whether to convict or acquit him of the impeachment charges. Like in the House, partisan politics is expected to drive the votes. Republicans hold a majority in the Senate with 53 members, while Democrats claim 45 members. Two senators identify as independent but typically vote with Democrats.

For Trump to become the first president removed from office by the Senate, two-thirds of the body, or 67 senators, would have to agree.

Before the impeachment trial begins in the Senate, each senator will take an oath that reads: “I solemnly swear … that in all things appertaining to the trial of the impeachment of Donald J. Trump, now pending, I will do impartial justice according to the Constitution and laws, so help me God.”

Republican Majority Leader Mitch McConnell, who remains in negotiations with Democratic Leader Chuck Schumer about the structure of the Senate impeachment trial, has signaled he will work with White House attorneys ahead of the trial — a statement that has received consternation from Democrats and constitutional scholars who argue that the legislative branch should operate independently from the executive branch.

Other senior Republican senators have said they hope they will quickly acquit the president.

“I am trying to give a pretty clear signal I have made up my mind,” said Sen. Lindsey Graham, a South Carolina Republican. “I’m not trying to pretend to be a fair juror here … I will do everything I can to make it die quickly.”

During the Clinton impeachment in 1998, then-representative Wicker voted to impeach Clinton on all four charges the Democratic president faced. Hyde-Smith was a few months from launching her first ever campaign for public office: a state senate seat she won in November of 1999.

“Now this process comes to the Senate, where the president will be treated fairly,” Wicker said in a statement on Wednesday night shortly after the House voted to impeach Trump. “I anticipate he will be acquitted and justice will be served. But significant damage (by the House) has already been done.”