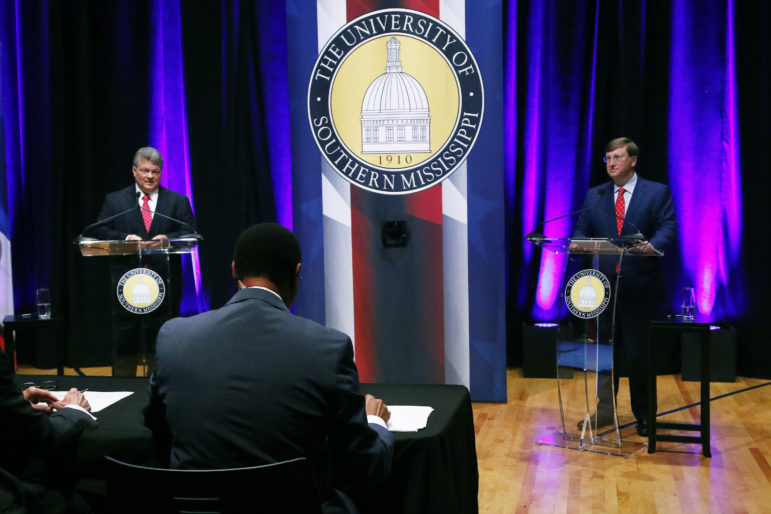 OXFORD — Lt. Gov. Tate Reeves shook hands and posed for photos as he made his way from the Grove, the tailgating haven at the center of the University of Mississippi campus, to Vaught-Hemingway Stadium for the Oct. 5 homecoming bout between the Ole Miss Rebels and the Vanderbilt Commodores.

Once inside the stadium, Reeves, the Republican nominee in the Nov. 5 governor’s race, spent time upstairs in the luxury skyboxes, schmoozing with several of the university’s top donors — many of whom were still abuzz about newly appointed Chancellor Glenn Boyce.

Boyce, who did not officially apply for the vacant chancellor position and was granted a late “back door interview” before being given the job, faces criticism from many university stakeholders after the Institutions of Higher Learning announced his hire the day before the game.

Before the game ended, Reeves posed for one more photo that has made its rounds online and sparked a conversation of its own: a picture with Boyce, Republican Congressman Trent Kelly, and Boyce’s wife Emily.

The state’s next governor, whether Reeves or Democratic nominee Jim Hood, will appoint four new IHL board members in 2021. And as controversy builds regarding the IHL board’s selection process of the University of Mississippi chancellor hire, many affiliated with the university are zoning in on the governor’s election.

“Maybe it’s time for individuals in this state to hold the IHL’s feet to the fire by being more involved in the political process,” Chuck Ross, history professor at the University of Mississippi and former chair of African American Studies Program, said unprompted in an interview earlier this week. “Many of these IHL board members are leaving as a result of their terms expiring. Those people will be replaced by the new governor. If you’re very concerned about the IHL process, one of the things you can do right away is vote next month in a way in which you think could improve the process.”

The University of Mississippi chancellor controversy came up during the first gubernatorial debate on Thursday night in Hattiesburg, further underscoring the moment. As university stakeholders debate the merits of Reeves and Hood in this regard, Mississippi Today asked the candidates earlier this week to weigh in on the matter and discuss how they would select new IHL board members.

Both candidates were asked the question: If elected, how would you decide who to appoint to the IHL board, and what are your general impressions of the magnitude of those appointments given the recent controversy at the University of Mississippi?

Hood replied in a statement: “I will have a nominating committee to review all applicants for all appointments. They will be made up of a diverse group of women and men. In appointments to IHL, I will be looking for people with experience in education and education administration.”

The Reeves campaign replied in a statement: “The governor’s appointment power is one of the most important reasons why Mississippians should elect Tate Reeves and defeat Jim Hood. It goes all the way to the top. Both our U.S. senators were appointed, and that makes a big difference in who sits on the U.S. Supreme Court. Jim Hood would make appointments that Nancy Pelosi will love but Donald Trump will hate. Tate will appoint conservatives and Hood will appoint liberals.”

During his two terms in the Governor’s Mansion, Gov. Phil Bryant became the first Mississippi governor to appoint all 12 members of the IHL board of trustees. The current 12 members of the board are part of a transition where their tenures were reduced from 12 years to nine years.

The terms of four members of the current board – board president Hal Parker of Bolton, vice president Ford Dye of Oxford, Shane Hooper of Tupelo and Ann Hannaford Lamar of Senatobia – will end in May 2021.

In May 2024 the terms of Tom Duff of Hattiesburg, Chip Morgan of Leland, J. Walt Starr of Columbus and Alfred McNair Jr. of Ocean Springs will expire.

Members whose terms will end in 2027 will be Steven Cunningham of Hattiesburg, Jeanne Luckey of Ocean Springs, Bruce Martin of Meridian and Gee Ogletree of Jackson.

For years when governors could serve only one four-year term and College Board members served 12-year terms, governors normally got to appoint only four members of the board. But that changed in the 1980s when the state Constitution was altered to allow governors to serve two terms.

And when the Constitution was changed to make the terms on the board members nine years instead of 12 years, Bryant got to appoint all 12 members during the transition.

Hood or Reeves, theoretically, could also appoint all 12 members of the board. The winner of the Nov. 5 election will appoint four members in 2021. And if the Nov. 5 winner then goes on to capture a second term in the 2023 election, that person would get to appoint four more board members in 2024. That person would still serve as governor in 2027, when four more members roll off the board.

In May 2027, the governor could name four new members, who could serve until the Senate confirmation process in the January 2028 legislative session. During that session, the new governor could appoint four new members who were not appointed several months before by the previous governor. The Senate would have the option to confirm those appointed by the previous governor or those appointed by the new governor.

The next governor will appoint at least four IHL trustees. Where do candidates Reeves and Hood stand?