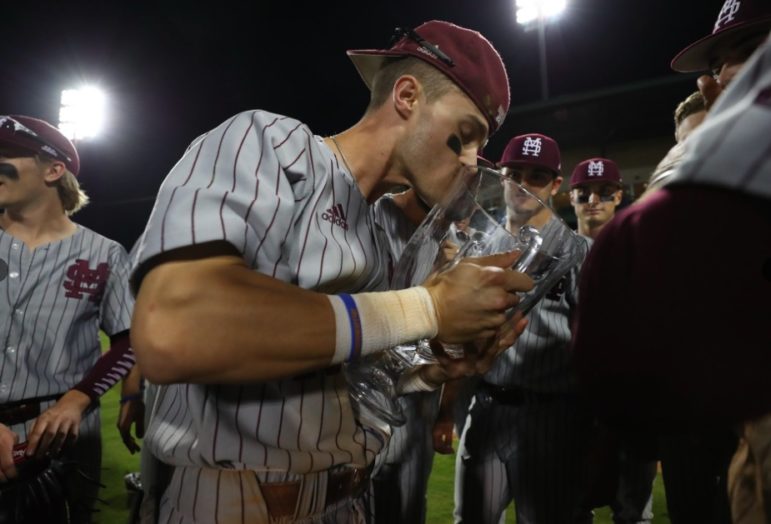 So, you probably heard or read about Mississippi State’s Jake Mangum, saying good-bye to college baseball at the College World Series with a plea to the NCAA to do something about the inequities in his sport.

Specifically, Mangum made a strong case for increasing paid assistant coaches to three (from two) and for significantly upping the limit of scholarships per team from the current 11.7.

Now then, here’s what you may not have known. Jake Mangum, the face of the Mississippi State program and the all-time Southeastern Conference hits leader, has been a walk-on since his sophomore year with the Bulldogs. That’s right: He came back to play his junior and senior seasons – when he could have gone pro – without any scholarship.

“I was fortunate enough to be from a family where we could afford my college,” Mangum said. “My mother and father agreed to it, and I agreed to it because we thought the money could be used better for another player. I haven’t been on scholarship for the last two years.”

It’s crazy, I know. One of the best baseball players in SEC history played for free the last two seasons.

And it gets crazier.

Last year, during the Major League draft, Mangum turned down bonus offers of $300,000 during the first 10 rounds of the draft. Teams called him saying they would draft him if he would agree to sign for that figure.

Mangum said, “No.” He wanted to return to school at State and try to win a national championship.

The New York Mets drafted him anyway, picking him in the 32nd round in hopes that he would have a change of heart. That wasn’t going to happen.

So you probably know that the Mets selected Mangum again in the fourth round of this year’s draft. He signed with the Mets two days ago for – now get this – a signing bonus of a mere $20,000. That’s right: 20 grand, for the all-time leading SEC hits leader and a strong-armed center fielder who runs down everything. Compare that to the $1.8 million contracts teammate Ethan Small and Southern Miss slugger Matt Wallner, both juniors, signed.

Mississippi State’s Jake Mangum rounds third base on his way to score another State run.

“That’s baseball,” Mangum said, in response to a question about the paltry signing bonus.

Major League baseball puts a premium on power and pitching. For position players, it’s all about home runs. And there’s more.

“That’s the way it is with college seniors. You have no leverage,” Mangum said. “Baseball is unbelievable in that you don’t get a scholarship to play for two years, and then you get heavily penalized financially for staying in school. But I knew that when I made the decision.”

“I wouldn’t change a freaking thing,” Mangum said. “I’d do the same thing. I’d go back right now. I’d go back in heartbeat.”

Instead, he heads Sunday to Brooklyn, N.Y., where he will live in a hotel and play for the Class A short season Brooklyn Cyclones in the NY-Penn League. You could make the argument that he faced better and more consistent pitching in the SEC than he will face there. You could make the argument that Mangum has proven he can hit and field at a level higher and that starting him at the advanced Class A level – or even Class AA – might have made more sense.

“This will sound like a cliché, but in this case it’s true,” Mangum said. “I’m not going to worry about anything that I can’t control right now. My only goal is to perform as well as I can at whatever level they put me at, and then just try to move up. The Brooklyn team draws big crowds. They really want to win. There’s pressure to win there.”

I told Mangum I could see him someday returning to Mississippi State, perhaps as baseball coach or maybe even as athletic director. There is a precedent for that – at State.

“My plan is to play professional baseball for as long as I can, and I plan to play for a long time,” Mangum said. “But when that’s over I’d love to coach college baseball and State would be my dream job. That said, Coach (Chris) Lemonis is going to win so many games there, and eventually he will win a national championship, and I can’t wait to see it.”

So, really, no regrets (other than the silly NCAA limits) about anything?

“Well, it wasn’t the storybook ending that we wanted,” Mangum said. “We didn’t win the National Championship, and that was always the goal. But, no, no regrets. I’d do it again, and I am so, so thankful for the support I’ve had – and we’ve had – from Mississippi State people. That’s what makes it all so special.”

Jake Mangum’s rest of the story: From walk-on to paltry signing bonus