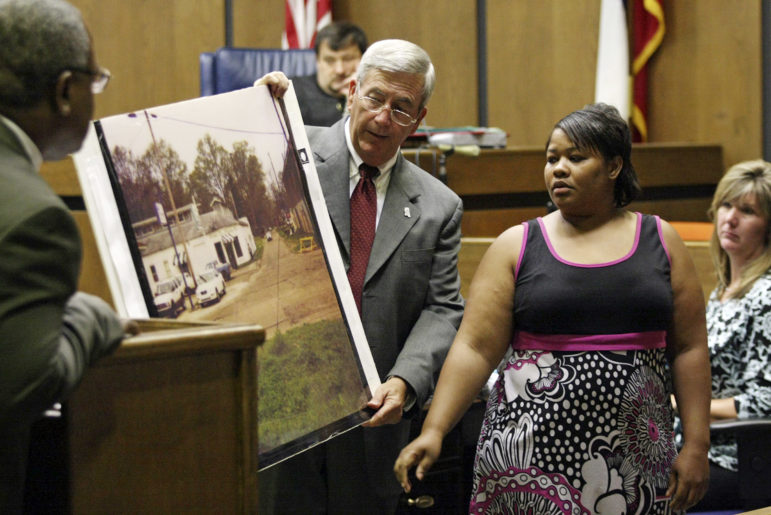 Clemmie Flemming points out to prosecutor Doug Evans, center, where she spotted Curtis Giovanni Flowers on the morning of four slayings at Tardy Furniture in Winona on July 16, 1996, on Monday, June 14, 2010 in Greenwood, Miss. This is the sixth time Flowers, 40, has been tried for the slayings.

Curtis Flowers, a Mississippi death row prisoner who was tried six times for the same crime, has a seventh chance at freedom after the U.S. Supreme Court ruled Friday that District Attorney Doug Evans discriminated against black potential jurors.

Justices ruled 7-2 to throw out Flowers’s conviction. A jury last found the Winona man guilty of a 1996 quadruple murder in Winona in 2010. In that trial, only one juror out of 12 was black, while the prosecutor struck five black potential jurors. 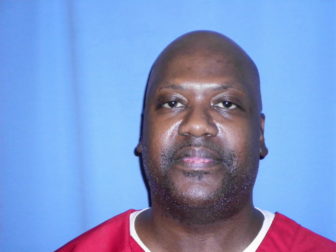 Jurors in that trial found Flowers, who is black, guilty of the murders of four people at the Tardy Furniture store in Winona – Bertha Tardy, Carmen Rigby, Robert Golden and Derrick Stewart. Flowers had briefly worked at the store prior to the murders.

In March, justices heard oral arguments on whether Evans violated Batson v. Kentucky, a 1986 Supreme Court ruling that determined that states cannot discriminate on the basis of race during jury selection in criminal cases.

The state argued that Evans struck potential jurors for reasons unrelated to race, including for working with or being related to members of the Flowers family.

But Justice Brett Kavanaugh in the majority opinion wrote, “The State’s relentless, determined effort to rid the jury of black individuals strongly suggests that the State wanted to try Flowers before a jury with as few black jurors as possible, and ideally before an all-white jury.”

“The numbers speak loudly,” Kavanaugh wrote, citing four prior prosecutions of Flowers, in which Evans attempted to strike all 36 black prospective jurors across those trials. Those previous trials informed the justice’s assessment of Evans’s intent in the sixth trial, Kavanaugh wrote.

Evans did not respond to a reporter’s call Friday morning. The prosecutor, who has represented seven counties in the northern half of the state since 1992, previously stated that he might prosecute Flowers a seventh time. He is up for re-election this fall, but faces no challengers.

Attorneys for Flowers issued a statement after the decision calling a seventh trial “unprecedented, and completely unwarranted.”

“The quadruple homicide in this case was a terrible crime, but Curtis Flowers did not commit it,” the statement goes on to say.

Thomas in his dissent wrote, “The only clear errors in this case are committed by today’s majority. Confirming that we never should have taken this case, the Court almost entirely ignores—and certainly does not refute—the race-neutral reasons given by the State for striking (Carolyn ) Wright and four other black prospective jurors.”

Flowers has spent most of the last two decades on death row at Mississippi State Penitentiary in Parchman since his first conviction in 1997.

Evans prosecuted each of the six cases against Flowers, securing three convictions. All three were tossed out, two for prosecutorial misconduct on Evans’s part. Jurors did not reach unanimous verdicts in two of the other trials.

It is unclear whether Evans himself will take Flowers to trial again. During oral arguments, justices questioned the state on whether the attorney general’s office could have taken over the case. In Mississippi, the attorney general can only intervene if the district attorney makes such a request.

Can an independent prosecutor intervene in the Curtis Flowers trials? Not unless Doug Evans asks

“If the decision is to retry the case, I am confident the Court’s guidance will be followed,” Hood said.