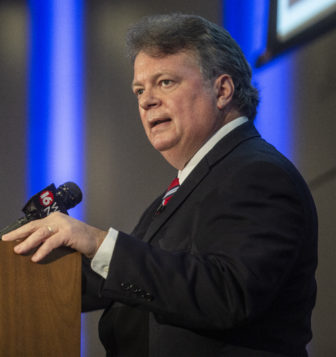 Mississippi will appeal a federal judge’s decision to block a controversial state law that bans abortions as early as the sixth week of a woman’s pregnancy, according to the attorney general’s office.

The announcement ends speculation about how Attorney General Jim Hood, a Democrat running for governor, would handle a law largely seen as unpopular within his own party.

Hood said that he would appeal the law on Friday because he wanted to give a higher court the chance to weigh in on the issue.

“Not only do I have a statutory duty to defend the laws passed by our Legislature, but the Fifth Circuit has not yet ruled on this issue,” Hood said in a statement on Thursday, referring to a federal appeals court.

Mississippi’s Legislature was one of several this spring that passed six-week abortion bans, known by its proponents as ‘heartbeat’ abortion laws because the measures prohibit abortion as soon as monitors can detect the rhythm that will become a fetus’s heartbeat.

The law had been set to take effect on July 1, but last month U.S. District Court Judge Carlton Reeves blocked the law, arguing that it was even more restrictive than last year’s 15-week ban passed by the Legislature, which he blocked.

“Here we go again. Mississippi has passed another law banning abortions prior to viability,” Reeves wrote in the opening sentences of his order, referencing the current standard established by the U.S. Supreme Court, that abortions should be legal up to the point of viability.

But many of this law’s supporters say they’re hoping that this standard will soon change with a newly solidified conservative majority on the Supreme Court, and they see fetal heart beat laws as a way to deliver that change.

Although other states have passed fetal heartbeat bills, none have withstood constitutional scrutiny. In March, a federal judge struck down a six-week ban in Kentucky, and six-week bans in Iowa and North Dakota have been struck down by the Iowa state Supreme Court and the 8th U.S. Circuit Court of Appeals, respectively.

“Yes, absolutely it was a factor,” Fillingane told Mississippi Today after the vote. “The appointment of Justice (Neil) Gorsuch (in 2017) didn’t really change anything politically because you were replacing one very conservative justice with another very conservative justice. But then when Justice Kennedy announced his retirement plans and Justice Kavanaugh was ultimately seated, then I think people on the right—and left—starting thinking, ‘Oh my goodness. What does the new court look like from a political and ideological standpoint?’”

In the lead-up to the August primary, speculation has been rampant about whether Hood would appeal the lower court’s decision. Although Hood said defending the law is his duty as the attorney general, he has not always followed that mantra.

When Judge Reeves struck down another controversial law in 2016 allowing business owners to refuse service to gay, lesbian and transgender people, Hood sided with members of his party who’d largely opposed the bill and declined to appeal Reeves’s decision, issuing a blistering take down of the law.

But there is a belief among some white Democrats that winning statewide office is difficult, if not impossible, for a candidate who supports abortion access. Although Hood’s public stance on abortion has only recently begun to take shape, he has long said he is privately anti-abortion.

“The Bible states that God knows us in the womb (Jeremiah 1:4-5), and that’s why I’m firmly pro-life,” Hood said in a statement to Mississippi Today in May. “I have defended in court every single law passed protecting the unborn, including the 15-week ban and the most recent ‘heartbeat bill.’ As governor, I will defend the unborn and the laws of Mississippi.”