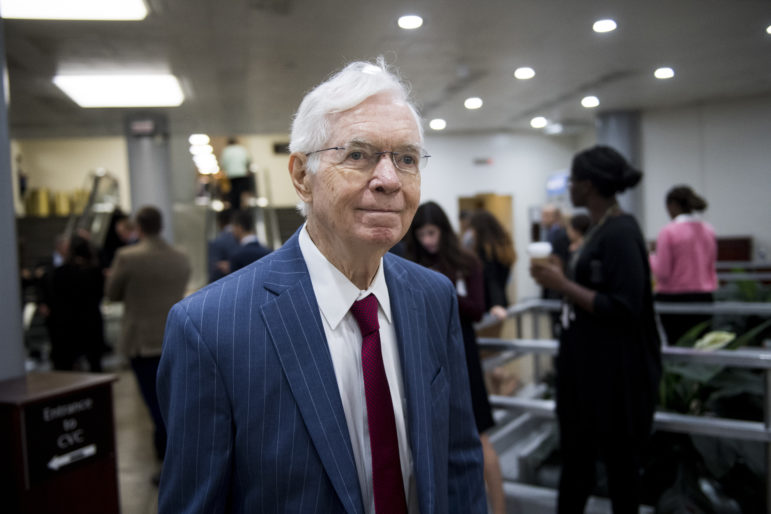 Republican U.S. Sen. Thad Cochran, whose 45-year congressional career was one of the longest in U.S. history, passed away Thursday morning. He was 81.

Cochran’s office released a statement on Thursday, saying: “Cochran’s family extends its gratitude for the support shown to the Senator by Mississippians over the years.”

Cochran resigned from the Senate in April 2018. His last few years in Congress were marked both by the powerful chairmanship he held as head of the Senate Appropriations Committee and, in later years, by his significant health issues.

“I regret my health has become an ongoing challenge,” Cochran said in a release announcing his retirement. “I intend to fulfill my responsibilities and commitments to the people of Mississippi and the Senate through the completion of the 2019 appropriations cycle, after which I will formally retire from the Senate.”

The 81-year-old senator was first elected to the Senate in 1978 and was the longest serving member of Congress at the time of his retirement. As chairman of the Senate Appropriations Committee, he steered hundreds of millions in federal dollars to Mississippi each year.

One of the most notable times was in 2005, after Hurricane Katrina had ravaged the Mississippi Gulf Coast. Facing resistance from then-President George W. Bush, a fellow Republican, Cochran threatened to shut down the government if Congress didn’t send massive relief money to the Coast, according to Cochran’s former chief-of-staff Brad White. In the end, he persuaded his colleagues to appropriate nearly $30 billion for the recovery efforts.

“It was the biggest earmark in history,” White said. “It saved the Coast.”

Despite his influence, Cochran preferred to wield his power more subtly, a tactic that earned the senator the nickname “the quiet persuader.”

“He was determined that everyone had good in them to some degree. Some you had to look harder than others, but if you look hard enough there’s common ground to be found with everyone,” White said.

“And his model of public service was that the people are always right. We are (in Congress) to serve, not to be served. We were there to help Mississippians.”

For more than three decades, Mississippians returned the favor, easily reelecting Cochran every six years with more than 60 percent of the vote. That changed in 2014, when he faced off against state Sen. Chris McDaniel, R-Ellisville for the nomination. Cochran lost the primary to McDaniel, a tea party Republican, by less than a percent but squeaked out a victory in the runoff, aided by strong Democratic turnout in Cochran’s favor.

The drama among the two campaigns, however, often exceeded that at the polls, with McDaniel taking aim at Cochran’s health and his marriage.

As news of Cochran’s death spread Thursday morning, accolades for the late senator flooded in.

“His influence can be felt in every corner of Mississippi. Whether it was fighting for resources during the dark days following Hurricane Katrina on the Coast or being a zealous advocate for farmers in the Delta, he dedicated himself to serving all Mississippians,” Bryant said in a statement.

“The Quiet Persuader dominated Mississippi politics for nearly half a century, and he did so by being a gentleman. Senator Cochran has left a legacy of public service that should serve as an inspiration for all Americans.”

His former colleague and friend, U.S. Sen. Patrick Leahy, D-Vt., said that despite being in opposing parties, they shared the same priorities.

“Thad Cochran was a devoted public servant, a lion of the Senate, and one of my dearest friends.  Despite our political differences, I knew Thad held the interests of the people of Mississippi – and the country – close to his heart,” Leahy said in a statement.

Cochran has carried on a tradition of Mississippians serving record tenures in the upper chamber. Three senators from the Magnolia State – John Stennis, Jim Eastland and Cochran – are among the 16 longest-serving senators in U.S. history.

Although raised a Democrat, Cochran’s interest in the Republican party began in 1968 when U.S. Sen. Lamar Alexander, R-Tenn., convinced the young attorney to campaign for Richard Nixon.

In the general election, Marice Dantin, a Democrat and district attorney from Columbia, finished second, while Charles Evers, the brother of slain civil rights leader Medgar Evers, ran as an independent finished third, with over 20 percent of the vote. In capturing the seat, Cochran became the first Republican elected to statewide office in Mississippi since Reconstruction.

During his nearly 40 year tenure, Cochran served on the Senate Ethics, Judiciary, Labor and Human Resources and Indian Affairs committees and chaired the Senate Agriculture, Nutrition and Forestry committees.

In the Senate, Cochran became an expert on agriculture policy and budget issues and earned notoriety for his acumen in steering money to his home state. In addition to recovery funds for Katrina, he earmarked millions for state industry and Mississippi’s interstate highway system. He fought for money to build new federal courthouses in downtown Jackson and Greenville, and his name adorns buildings on half the state college campuses.

“He got contracts for Ingalls that would keep them in business down there for generations,” White said, referring to the Jackson County shipyard.

“And DeSoto County wouldn’t be able to flush their toilets if it wasn’t for Thad Cochran and all the federal money that went into infrastructure (when) their growth rate was so high, so fast.”

But as a result of the favor he showed his home state, Cochran sometimes drew rebuke from pork-barrel-spending watchdogs.

For example, the conservative-leaning Citizens Against Government Waste reported in 2010 that Cochran outpaced all other members of Congress in awarding federal earmarks, a practice that was largely suspended when Republicans regained power in Congress in 2011.

As a result, the momentum McDaniel brought to his 2014 primary challenge blindsided Cochran’s team. During that campaign, several national and statewide outlets published stories highlighting the senator’s health, and McDaniel and his supporters weaponized those reports to portray Cochran as complacent and out of touch.

McDaniel, who had wide support from the then-powerful Republican tea party movement, criticized Cochran as a longtime Washington, D.C., insider who was insufficiently conservative on social and fiscal issues. McDaniel’s victory of less than half-a-percent in the June 2014 Republican primary did not garner enough of the vote to avoid a runoff.

In the runoff, Cochran’s campaign took advantage of Mississippi’s open-primary system, which allows voters to vote in either party’s primary. Touting his support for historically black colleges and universities and city infrastructure projects, Cochran drew support from African Americans and others to defeat McDaniel in a runoff election.

Those who knew Cochran well describe a man who was very much a part of Washington’s old guard, who loved his job and felt a greater allegiance to Mississippi than to his political party, though those two interests frequently intersected. As a result, praise for Cochran’s accomplishments frequently overlap with praise for his character.

In his statement following Cochran’s death, Lt. Gov. Tate Reeves spoke of the senator’s “wit and wisdom,” saying “he is at the same time a legend and a truly decent, good man—rare in our line of work.” Speaker of the House Phillip Gunn, R-Clinton, called Cochran “a true statesman.”

Public service was part of Cochran’s family tradition. Born in Pontotoc in 1937, both his parents, Emma Grace and William Cochran, were teachers. Later, after the family had moved to Byram, William Cochran became the Hinds County superintendent. His brother, Nielsen, served as a Jackson city council member and as a member of Mississippi’s Public Service Commission.

This tradition left an impression on Cochran, who served in the U.S. Navy after college. Even in his later years, as his health and memory faded, Cochran remembered his duty to the state.

Three weeks ago White stopped by the assisted living home in Oxford where Cochran spent his final days. By this point, Cochran was struggling with his memory. But the visit with his former chief-of-staff jogged something in the former senator.

“He looked at me and said, ‘Chief, are there any votes today?'” White said. “I said, ‘No, senator, we’re in recess.’ He said, ‘Oh good. Make sure you go out into the district and ask people what they need. We’ve got to make sure the people are taken care of.'”

“He probably wasn’t fully aware of everything he was going through, but he made sure to ask that Mississippians were taken care of,” White told Mississippi Today.

Cochran attended the University of Mississippi, graduating in 1959 with a bachelor’s degree in psychology. During his time in the U.S. Navy he was stationed in Boston for two years before enrolling in law school at Ole Miss.

During law school, Cochran served as an editor for the Mississippi Law Journal and returned to active duty in the summer months. Afterwards, he practiced law in Jackson starting in 1964, the same year he married the Rose Clayton.

Rose Cochran, who had lived in a nursing home for more than a decade, died in 2014. They had two children: Kate, an English professor at the University of Southern Mississippi, and Clayton, a nonprofit fundraiser who lives in Madison. Cochran married his longtime aide, Kay Webber, in May 2015.

Sen. Thad Cochran, a 45-year veteran of Congress, dead at 81

by Larrison Campbell, Mississippi Today
May 30, 2019