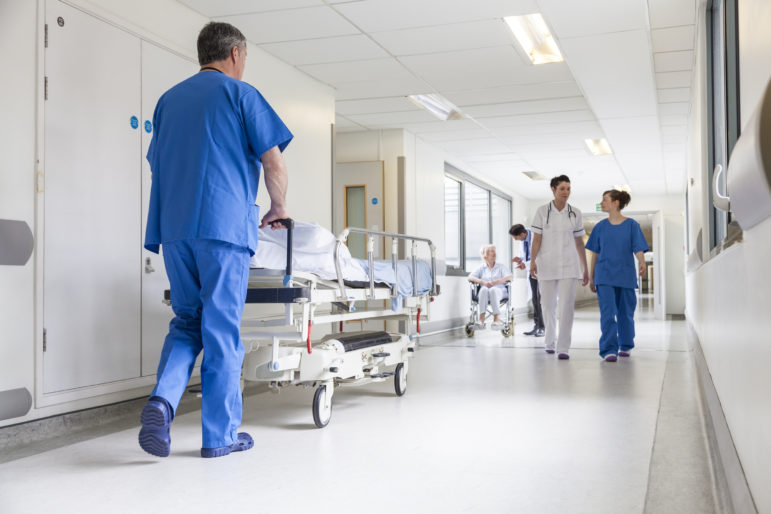 Mississippi’ has 64 rural hospitals, 48 percent are at “high financial risk,” meaning they have a combination of poor profits, high debt and low cash reserves.

Mississippi has more rural hospitals at risk of closing than any other state in this country, meaning the most medically underserved state could soon lose even more doctors.

Thirty-one of Mississippi’s 64 rural hospitals, or 48 percent, are at “high financial risk,” according to a national report of rural hospitals from independent consulting firm Navigant. This is more than double the rate nationwide, where just 21 percent are listed as being in danger of closing.

The list of 31 at-risk Mississippi hospitals, which Mississippi Today obtained, include public and private hospitals spanning every corner of the state, from Merit Health in Natchez and Rush in Meridian to the award-winning North Sunflower Medical Center in Ruleville. “High financial risk” means a combination of poor profits, high debt and low cash reserves. Some hospitals on the list have just a few days of cash on hand.

“I worry about them. I know we have a lot of good people working there, just trying to keep their doors open,” said Ryan Kelly, executive director of the Mississippi Rural Health Association. “A billing person’s out sick for a week, and they’re out of money. Any one little thing could cause them to close their doors.”

But Kelly also cautioned that the report is far from a death sentence for the hospitals listed as high financial risk.

“I don’t think that the report itself is the full story but it certainly paints a picture of the struggle that our rural hospitals are having right now.”

The study looked at 2,045 rural hospitals across the country, using data from the Centers for Medicare and Medicaid Services to measure financial viability through three areas: the facilities’ operating margin over the past three years, days of cash on hand and the amounts of debt and capital that they hold. Nationally they found 430 rural hospitals at high financial risk.

In addition to risk, the report also tried to determine how essential the survival of each hospital is to its community, looking at factors like the level of trauma care it can provide, its geographic isolation, and hospital employee-to-county population. Of Mississippi’s 31 “high financial risk” hospitals, the report determined that 13 were “moderately essential” and six were “critically essential” to their areas.

Studying the list of Mississippi’s 31 at-risk hospitals, it’s difficult to see a pattern of what puts one at risk. The hospitals include public and private, those with over 100 beds and those with under 25. Several are stand alone facilities while others are affiliated with larger systems, like the University of Mississippi Medical Center.

“This is a problem everywhere, but it’s a big problem in Mississippi,” said David Mosley, co-author of the study and managing director at Navigant.

Answering why it’s such a big problem, however, isn’t simple, experts say. Nationally studies have linked hospital closures to states’ decisions against expanding Medicaid. Mississippi is a non-expansion state, and eight of the 15 states with the highest percentage of at risk rural hospitals have not yet expanded Medicaid. Nationally only 15 states total have not yet implemented some form of Medicaid expansion.

But all the states have felt the repercussions of the national push towards expansion. Federal funds used to repay hospitals for caring for uninsured patients have been cut as the Affordable Care Act has rolled out, the logic being that expanded coverage would reduce the need for the funding.

“So in Mississippi we’ve had all the negative impacts of (Medicare cuts) without any of the benefits of expansion,” said Richard Roberson, vice president of the Mississippi Hospital Association, which lobbies for hospitals in the state.

But Mosley said expansion wouldn’t completely fix the problem. In 2017, Mississippi had 352,000 uninsured residents, which is approximately 12 percent of its population and the seventh-highest rate in the country, according to U.S. Census data. Rural areas, like the Mississippi Delta, often have a larger share of uninsured patients, which can strain the hospitals that serve them because emergency departments are not allowed to turn away people who can’t pay.

“So expansion, yeah, that would help,” Mosley said. “But it’s not going to completely fix the problem because even if you expanded Medicaid and you said all right all these people are on Medicaid, well Medicaid doesn’t pay cost and once everyone’s insured you’d have a lot more volume of those people.”

And, Kelly pointed out, Mississippi patients are often less healthy, meaning more expensive to treat and insure, than patients in other states. Mississippi has ranked dead last in the health of its residents all but four years since 2000, according to America’s health rankings. Those years Mississippi ranked second-to-last.

“Connecticut could have not expanded Medicaid and had healthy hospitals and never had a crisis situation,” Kelly said. “We’re going to have a hospital crisis regardless of what we do with Medicaid. And part of the reason is that it’s just so costly.”

Mosley said that as technology has advanced over the last three decades, the ways that hospitals treat their patients has changed dramatically, from an in-patient system to an out-patient one. More invasive procedures are routed to larger medical centers.

“They have less volume and less surgeries, and the business model they were built on, that’s how you make your money. So what happens is you cut this (service) and you cut that?”

In 2013, rural hospitals had an average of 50 beds and 321 employees, but only seven inpatient stays a day, according to a national report from the Kaiser Family Foundation.

“Ultimately the community is going to have the hospital it can support,” Mosley said.

But he also cautioned that the hospital a community can support is not necessarily the same as the one it needs. Rural hospitals are often the largest employers in a community, and when they go they leave holes in employment and health care. At least 60 percent of trauma deaths occur in rural parts of the country, where just 25 percent of the population lives. When a rural community loses its hospital, the time spent in an ambulance increases more than 75 percent, according to a University of Kentucky study.

“If you live in a rural area and you have to drive an extra 25 minutes what’s going to happen to you?”Mosley said.

“If you’re trying to resuscitate somebody that’s a lot of time.”

Half of Mississippi’s rural hospitals at risk of closing, report says