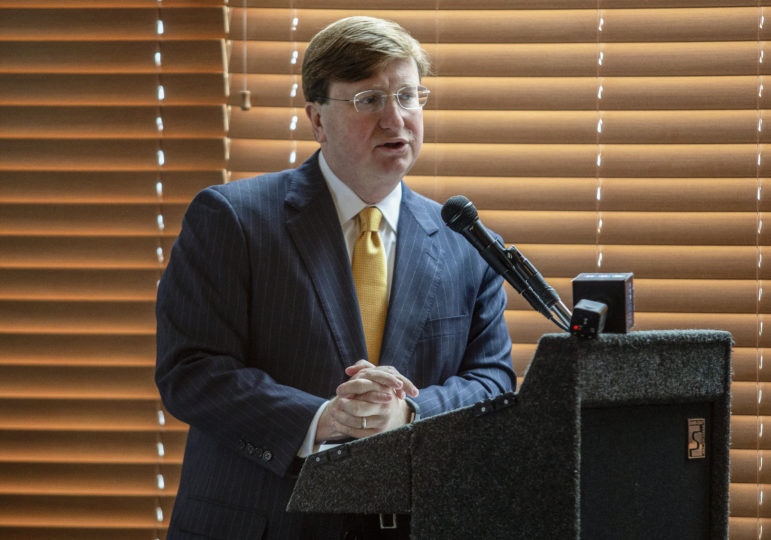 Lt. Gov. Tate Reeves stood before a group of Republican state senators in the upstairs room at Iron Horse Grill in downtown Jackson last week with a stack of papers.

Printed on each sheet was a short pledge to support his candidacy for governor in 2019 and line for a signature, according to seven Republican senators who attended the Jan. 16 lunch.

Reeves and most political observers are gearing up for him to face off against Democratic Attorney General Jim Hood, who has boasted of garnering support from some conservatives. At the Jackson restaurant, Reeves stressed party unity and loyalty, warning of the dangers of a Democrat becoming the next governor. He then asked each senator to sign and return the pledges before leaving the restaurant.

Several senators signed the pledge. The senators, most of whom declined on-the-record interviews with Mississippi Today because of the possibility of retaliation for breaking ranks and speaking with the press, had varying reactions to Reeves’ request.

Senators who signed the pledged indicated that they planned to support Reeves anyway, that the request was not out of the ordinary or refusing to do so would cause unnecessary tension with Reeves. Those who declined to sign the pledge characterized the move as off-putting.

“I don’t know if I would have done it that way. Somebody said they like his policies, like on tax cuts, but that he might not have the best bedside manner. That’s a good way to say it,” said one senator, who asked that their name not be printed out of fear of drawing Reeves’ ire.

Reeves’ campaign on Tuesday characterized the pledge cards as a request for his colleagues’ endorsement.

“Since qualifying to run earlier this month, Lieutenant Governor Reeves has asked hundreds of legislators and local elected officials and grassroots leaders for their endorsements. As the campaign progresses he will ask every Mississippian for their endorsements too — and we will keep working until we get a majority,” said Clinton Soffer, a Reeves campaign spokesman.

The episode highlights a paradox Reeves and the Mississippi Republican Party know they must reckon with this year. On one hand, Reeves is among the least popular statewide officials, according to some polls. On the other, Reeves is one of the best financed gubernatorial candidates in recent history who, as president of the state Senate, can kill any bill that crosses his desk and, therefore, wields tremendous influence over the electoral prospects of just about every member of the Legislature.

In anticipation of Reeves’ announcement of a gubernatorial run, Mississippi Today has interviewed lawmakers and other Republicans over the course of the last year about Reeves’ leadership style, strengths and weaknesses.

As Reeves, 44, now officially begins asking Mississippians to make him their next governor, he and Republican Party leaders are staring down a possibility that they haven’t seriously considered since 2003, when Reeves was a 29-year-old portfolio manager and an unknown in politics: That a Democrat could in fact win the Governor’s Mansion. 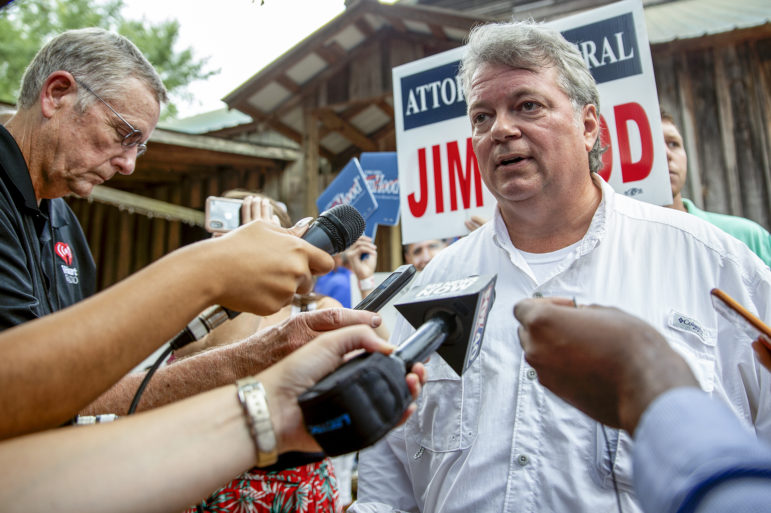 “I always tell my classes that in the South, back when everyone was still a Democrat, it was all about the politics of personality,” said Marvin King, a political science professor at the University of Mississippi. “Hood’s is a politics of personality: ‘I talk like you. I care about the same things. I go to the same church as you, let’s disregard the party label.’ His campaign theme might just be, ‘I’m Jim Hood.’ Because he can pull off the moderate Dem label, he can credibly point to instances when he disagreed with Democrats at the national or state level.”

King continued: “Tate can’t do that. He has no choice but to be a partisan. His base requires him to not compromise. His base wouldn’t like compromise.”

‘I still have to work with him’

Reeves’ personal distaste for compromise brought on the worst stretch of his political career when, through legislative failure and scandal, the political winds in Jackson started shifting.

Even inside the Capitol, where he’s presided over the Senate for seven years, many top power brokers and even his Republican colleagues began questioning his leadership in 2018.

Lobbyists whisper that their clients had soured on Reeves.

In an act that once would have been considered suicidal, several Republican senators bucked Reeves or spoke out about his top-down, heavy-handed leadership style. Reeves has also faced criticism for not giving rank-and-file Republicans a say on major policy.

“It would be nice to know more about what the (education) bill is going to look like instead of having such a short time to decipher it,” Sen. Chris Massey, R-Nesbit, told Mississippi Today during the 2018 session. “It’s always hard to tell what he (Reeves) is going to do.”

Reeves, who has a reputation for mercilessly killing the bills of political opponents, at times found it difficult to get his own agenda through the committees he assembled.

For example, a rewrite of the public-education funding formula — Reeves’ top goal of the 2018 legislative session that the current Republican leadership want as their hallmark — died in his chamber when eight Republicans voted to procedurally kill the bill even after it passed the House. About two weeks before the Senate killed the bill, 20 Republican senators told Mississippi Today they were not privy to Reeves’ plans for the legislation.

Another Reeves pet issue, a proposal to expand a voucher-like program for public school parents to send their children to private schools, also failed to muster support in a committee led by a top Reeves lieutenant, Sen. Gray Tollison, R-Oxford.

Even when Reeves’ bills made it through his Senate, they met fierce opposition by the House and its leader, Speaker Philip Gunn, R-Clinton. Despite public pressure on both Reeves and Gunn to strike a deal on roads and bridge funding, Gunn killed what Reeves wanted to be his landmark infrastructure-improvement plan, leaving many of the state’s largest cities and counties without money to keep hundreds of unsafe bridges open to traffic.

Senators began expressing their frustrations with the process.

“There are some people that gripe about not getting invited to the table,” Sen. Chuck Younger, R-Columbus, told Mississippi Today at the time. “Most of the time, those are Democrats, but there are more and more Republicans.”

Younger continued: “I don’t want to dog Tate too much. I still have to work with him.”

Not afraid to say no

The 2018 legislative setbacks paled in comparison to the explosive reports that summer suggesting that Reeves exerted political influence over the Department of Transportation to spend $2 million on a road connecting his gated, suburban neighborhood to easier highway access.

Though he denied the accusation, the controversy sparked an investigation by his political rival, Attorney General Hood, as well as provided fodder for newspaper op-eds, editorial cartoons and punchlines for candidates out on the stump. 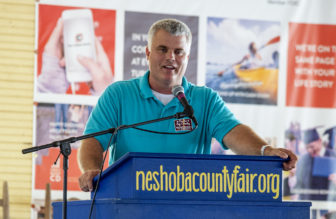 State representative Michael Ted Evans, the Democratic nominee for the third congressional seat in the 2018 midterms, garnered big laughs at the Neshoba County Fair when he derided the frontage-road project as the “Tater Tot Expressway.”

As the blows to Reeves’ political brand mounted and amid GOP platform setbacks, he pointed his finger in several directions: his political rivals in the House, liberal Democrats and the media. Remaining steadfast in key policy negotiations inside the Capitol, as House Republicans have characterized, he has stayed true to the political strategy of championing conservative ideals and touting his achievements.

Reeves has built his political career on his fiscally conservative policy. Since he began presiding over the Senate in 2012, he’s spearheaded more than 50 tax cuts or incentive packages, the majority of which have benefited out-of-state corporations. He has scrutinized state agency spending and consolidated more than a dozen public school districts, seeking to find a sweet spot where more funds go to the classroom instead of to administrators.

“I am proud of my record over the last seven years because I’ve done exactly what I promised voters I would do by cutting taxes and finding efficiencies in state government,” Reeves said last week at the Stennis Institute’s press club luncheon. “I’m not afraid to say no, sometimes even to my friends, and I have no plans to change just because this is an election year.” 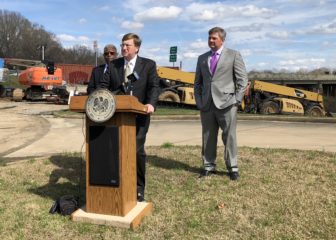 “He’s always extraordinarily respectful, and if we disagree about a bill moving through my committee, he’s willing to let me make my case to both him and the committee members,” said Joey Fillingane, R-Sumrall and chairman of the Senate Finance committee. “There really isn’t a single bill that crosses his desk that he doesn’t know everything about. If he takes a meeting on it, he knows it better than almost anyone.”

Gov. Bryant, who remains the Republican elected official with the highest approval rating in the state, tweeted of Reeves shortly after his gubernatorial announcement: “We’ve had a strong partnership for the last seven years, and I look forward to continuing that into the future.”

Reeves’ unpopularity extends beyond the Capitol, and into communities where his philosophy of small government is at odds with local governments’ need for state help. This tension was particularly stark in the wake of an April emergency declaration that closed hundreds of bridges across the state deemed unsafe by federal standards.

“I’m a staunch Republican and he is too, but he hasn’t been a friend to any municipality in the last few years,” Lucedale Mayor Darwin Nelson told Mississippi Today. Lucedale is the county seat of George County, which Reeves won with 80 percent of the vote in 2015. 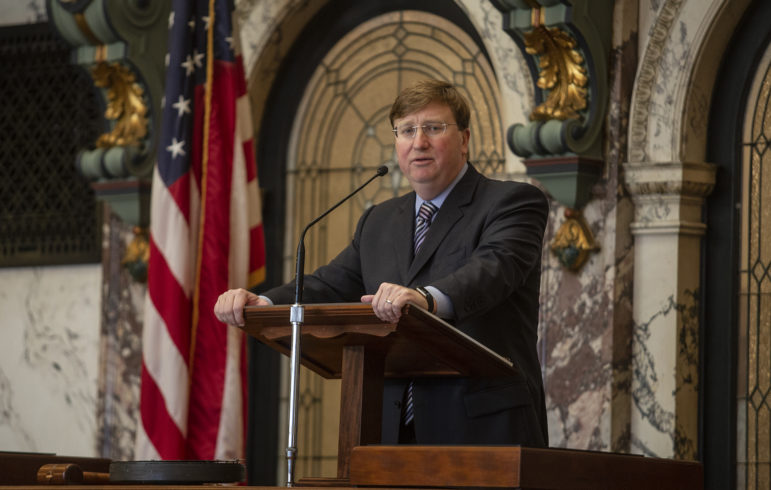 While echoes of Republican discontent grow louder, primary voters will have at least one other choice in Rep. Robert Foster, R-Hernando, who announced his gubernatorial bid in December. Foster, a first-term lawmaker with little statewide name recognition but a base of support the second most Republican county in the state. He has not mentioned Reeves by name but has framed his candidacy around Reeves’ dwindling favorability among Republicans.

“I’m challenging against an expected hierarchy. There’s people that have thought for a long time that this seat was theirs, and I feel like the people should have a right to decide that. I just want to give them a choice,” Foster told Mississippi Today after announcing his candidacy.

As battle lines continue to be drawn ahead of the March 1 qualifying deadline, the Aug. 6 statewide primary and the Nov. 5 general election, Reeves has downplayed the notion of the governor’s race being a driving force behind his decisions as lieutenant governor.