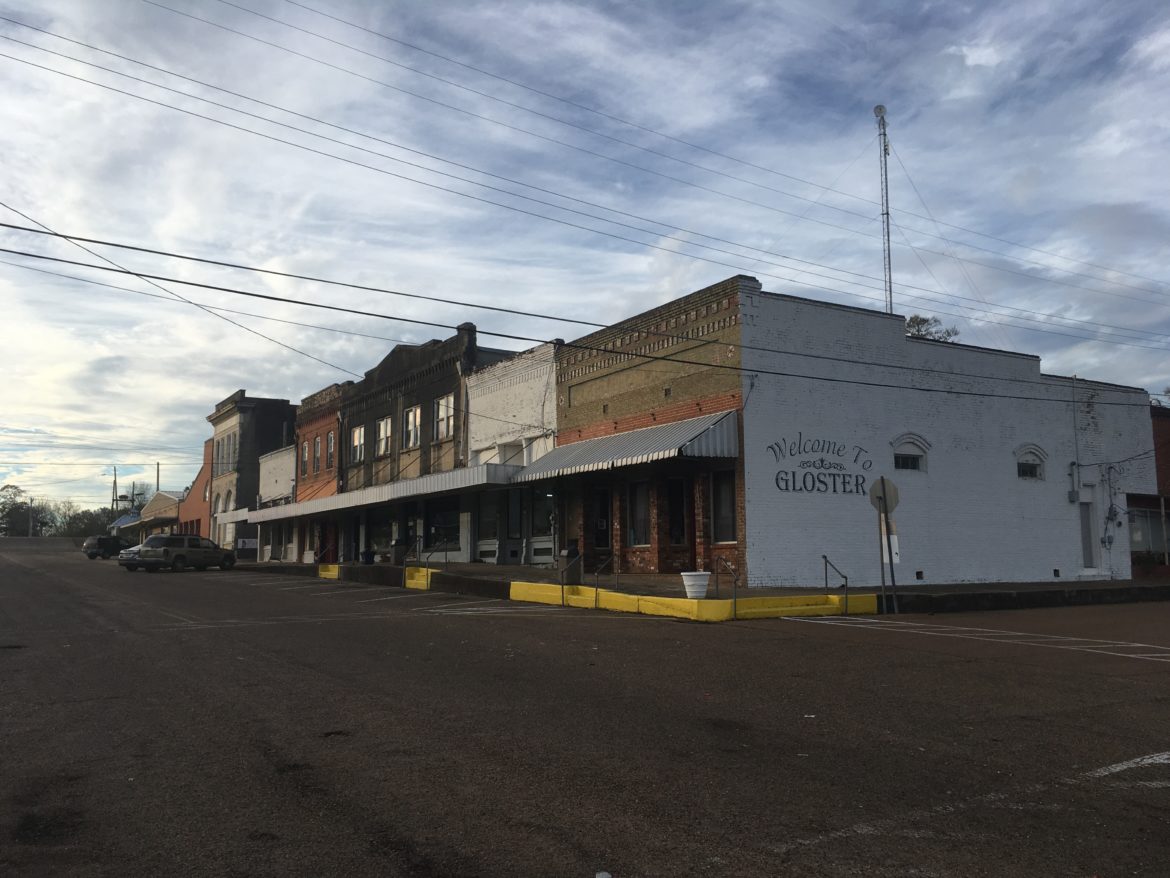 GLOSTER — For residents here, food excursions would range from the 30 minute round-trip to Centreville, to the 2-hour round-trip to Baton Rouge, La. The nearest Walmart and Kroger, over in McComb, are roughly an hour’s drive each way.

A small rural town in Amite County, Gloster is just south of the Homochitto National Forest in southwest Mississippi; it’s less than two square miles in size and home to around a thousand residents, according to the 2016 American Community Survey.

Companies are scared, despite minimal competition, that they won’t make enough of a profit to survive in towns with a small consumer base — towns like Gloster. In a sparsely populated state like Mississippi, this is a common dilemma, especially when it comes to access to food.

But a few weeks ago, a welcome newcomer moved into town: an independently owned Piggly Wiggly grocery store arrived in the heart of Gloster, just in time for Thanksgiving. The town’s first grocery store in decades.

“We needed this,” said Felecia Nayland, 56, who’s lived in Gloster all her life. I just hope and pray that they continue to do good business here so they’ll stay here.”

Nayland said previously, access to fruits and vegetables in town was “pretty much non-existent.”

Limited access to grocery stores in rural areas is one reason Mississippi has the fourth highest rate of food insecurity — the federal government’s measurement of hunger — in the country. Over half a million Mississippians did not know where their next meal would come from between 2015 and 2017, according to the latest report from Hunger Free America, “The Red, White, and Blue Hunger Wave: A 2018 United States Hunger Atlas.”

Many here see the public-private partnership that brought the Piggly Wiggly grocery store to Gloster as part of the solution to an all-too-common problem in rural towns around the state —  availability of affordable, fresh food.

Lavonne Sanders, 50, has also lived in Gloster her whole life, and said the last time the town had a store like this was when she was a little girl, about 30-40 years ago. That too was a Piggly Wiggly. 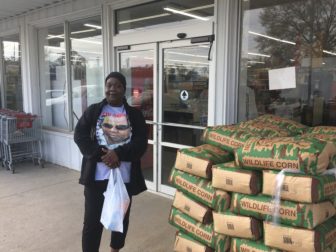 “I love this store, it’s made a big change,” Sanders said. “We don’t have to go Centreville anymore. You don’t have to spend that gas money now.”

While the store licenses the Piggly Wiggly brand, the shop itself is independently owned and operated by Jason Cook. Cook, from Hattiesburg, learned about Gloster a few years ago while at a previous job. The company was considering expansion into the small town, but in the end opted against it. Since then, Cook opened a Piggly Wiggly in Angie, La. — but he didn’t forget about Gloster.

“I came back here when I was financially able to,” Cook said, “just because after having talks with the community I knew how bad it was here. So the Lord led us back here.

“Most companies will turn their nose up at a store doing under $100,000 a week in sales. My approach is a little different; I do it to operate a business, but I also do it out of just having humanity and compassion. The way I do things aren’t necessarily the way anyone else does them.”

The city approved a tax incentive for the store, which will reimburse Cook for exterior improvements like the parking lot and sidewalk repair. Cook said without the community’s responsiveness and support, including the financial help, the Piggly Wiggly likely wouldn’t have opened. The store created 22 jobs.

“If you can get into a town where the government will help you get established there to lower your overhead (cost), then you can make it,” Cook said. “You don’t get greedy, and you don’t take advantage of people, you just operate. I live within my means. I’ve got to make a profit in order to pay the bills, but I’m not trying to become a millionaire off of it.”

After years of driving out of town, often out of county, to find fresh produce and essentials, residents were prepared to fill Piggly Wiggly; by 3 p.m. on a Monday, the grocery store was the busiest place in Gloster.

“It’s brought some life back to the town,” said Rachel Stevens, 54, who works at a business on Main St. around the corner from the new store. 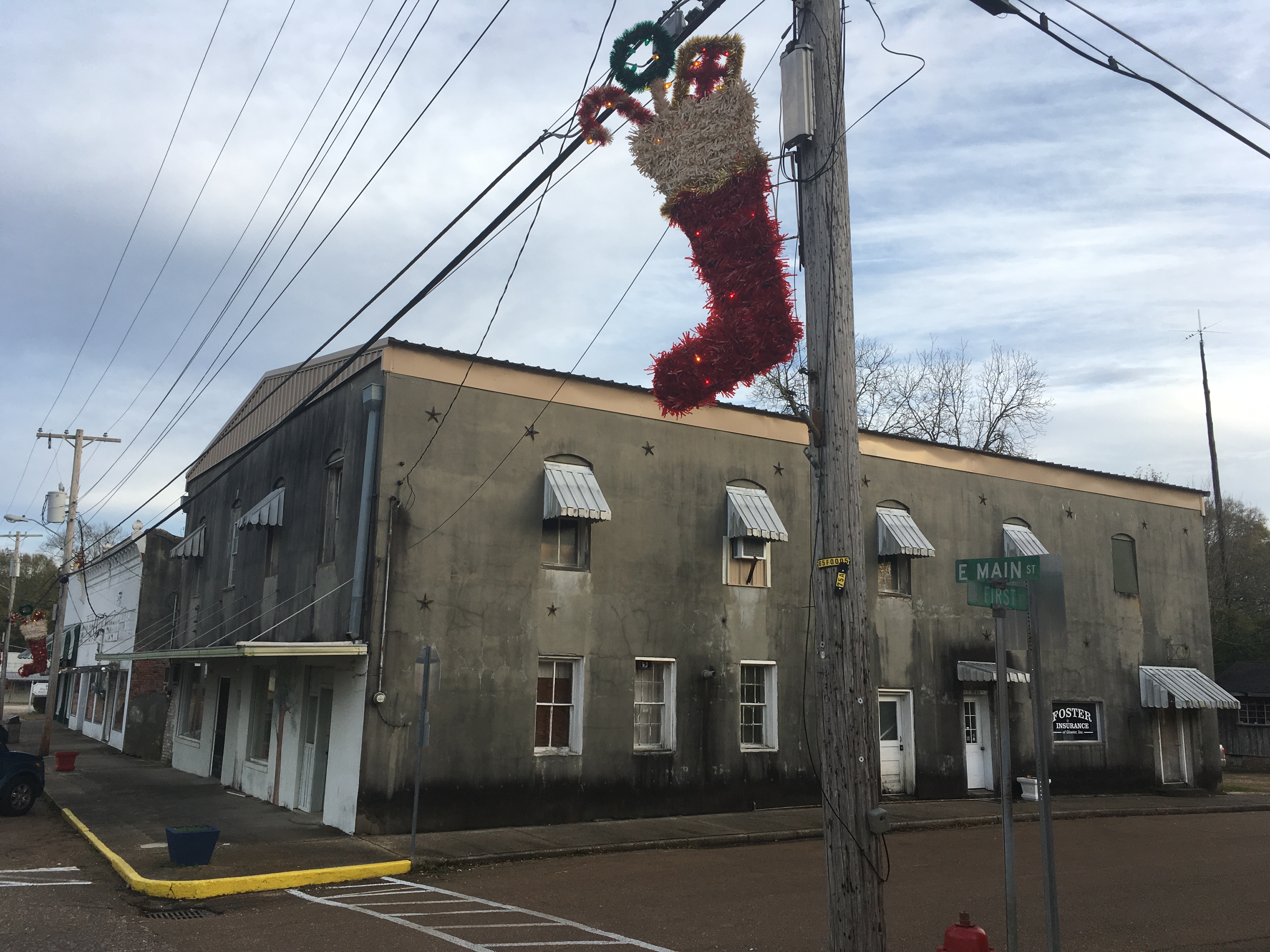 A street corner in Gloster.

Stevens and other residents discussed having to cram all their grocery shopping into a couple trips a month.

“We’d have to stock up. It’s really inconvenient when you run out of stuff. We had no choice, no options,” she added.

More than just the convenience, residents think the Piggly Wiggly will lift spirits and create momentum for the town.

“The grocery store may just be enough,” said Bradley Bruce, a Chicagoan who moved to Gloster eight years ago. “I knew it was hyped up when people, even in the other counties, would say, ‘Did you hear about the Piggly Wiggly?’ It’s the biggest thing in a long time in this area.”

“To hear over the course of several years how badly a grocery store was needed and wanted in the town, and now that the town finally has it, it really is a feeling of bliss and happiness,” said Rep. Angela Cockerham, D-Magnolia, who represents Amite County.

Cockerham, an attorney at Wise Carter, also serves as Gloster’s lawyer. She added that the incentives Piggly Wiggly received could help attract business in other places in Mississippi.

“In the future, I’m hoping that there will be other mechanisms that will help areas like Southwest Mississippi that encourage partnership (between towns and businesses),” she said. 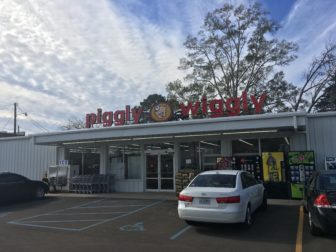 The new Piggly Wiggly in Gloster, which opened just before Thanksgiving.

Statewide solutions and the Legislature’s role

Much of the state — about 1 in 5, according to Hunger Free America — struggle with consistent access to nutritional food.

The phenomenon ranges from urban areas, like Hinds County, where 1 in 4 are food insecure, to rural areas like Jefferson County, which had the highest food insecurity rate in the country in 2016 at 36 percent, according to Feeding America.

Can the public-private partnership in Gloster work in the rest of the state? What can the state Legislature do to help?

Rep. Jarvis Dortch, D-Jackson, has pushed for legislation to give tax credits to grocers locating in underserved communities. A 2018 bill would have given these stores a job tax credit equaling 10 percent of its payroll.

Sen. Willie Simmons, D-Cleveland, has introduced bills for the last several years to allow state funds to be used as a direct source of funding for grocery stores under the Small Business and Grocer Investment Act passed in 2014. 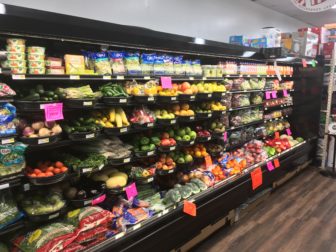 The produce section inside Piggly Wiggly

Each of these bills died in committee with little fanfare.

Simmons said his proposal to use state dollars directly is unlikely to garner the support of leadership. Tax incentives, similar to those Mississippi gives large companies like Nissan and Continental Tire, might be more palatable, Simmons said.

Right now, Mississippi is leveraging tax incentives for industries to locate in the state, but those benefits do not apply to businesses like grocers.

“Because of the number of employees, the kind of wages they’re paying, (grocers) wouldn’t qualify for the same type of incentives that an industry would,” Simmons said.

The federal government’s primary vehicle for providing at least some food to the poor is the federal Supplemental Nutrition Assistance Program, which provides monthly allowances based on the size of the recipient’s household. Mississippi has one of the largest federal matches of any state for these assistance programs.

“We in Mississippi have depended so much on the federal government to feed the hungry in the state that we ourselves are not focused on it,” Simmons said. “We have not stepped up to the plate to give adequate dollars to match that to help those citizens out of their particular situation … We’ve not had to.”

To slightly ease the burden of affording groceries for Mississippi residents, Rep. Jeramey Anderson, D-Escatawpa, repeatedly proposes legislation to remove the sales tax levied on food items for all shoppers. SNAP purchases are already exempt from sales tax. A version of the same bill from Rep. Robert Johnson, D-Natchez, would have also increased all other sales tax from seven to nine percent.

“In my opinion, the best way to provide a tax cut to our constituents, especially those in the middle and working class, is to eliminate this sales tax (on food),” said Anderson, who plans on reintroducing the bill next session. “And I know that of course there has to be a make-up of the revenue lost from taxes on groceries, but I think phasing it out, which is what this bill does over five years, is a responsible way of doing that without hitting the state’s revenue so hard. I think the sales tax on groceries is one of, if not the most, regressive taxes we have.”

Both bills also died, as well as several bills to raise the state minimum wage, which currently mirrors the federal rate of $7.25 an hour, to between $8.25 and $10.10.

The report also calculated that Mississippi residents would need to spend an additional $273 million each year on food to meet their basic nutritional needs. That’s roughly one-third the amount Mississippi spent, $841.8 million, through the SNAP program in 2017.

“When you get into a situation and you do it for so long, it just becomes a way of life,” Simmons said. “If we do more at the state level, we could actually become a state of change, where we are transitioning our people from poverty to prosperity.” 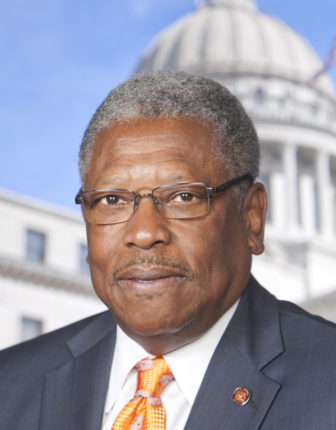 At the Mississippi Center for Justice, a nonprofit law firm that focuses on racial and economic issues, Madeline Morcelle and Kathryn Rehner promote a wide-range of solutions to tackle the root causes of food insecurity.

“In order to achieve a food secure Mississippi, the state legislature will need to take on a broad range of social, economic, and physical barriers to healthy food access,” Morcelle said. “Those include everything from poverty, which is perpetuated by the fact that a lot of people still aren’t paid a living wage; measures to improve the minimum wage would improve food security. I think tax incentives and other measures to incentivize investments from food retailers are important.

“Ultimately, though, there isn’t one solution. It will take a combination of state reform addressing the multiplicity of factors that result in food insecurity, from lack of transportation, to inadequate income, to lack of opportunity in many communities, to protecting and strengthening our essential nutritional assistance programs like SNAP that provide that emergency lifeline to struggling families.”