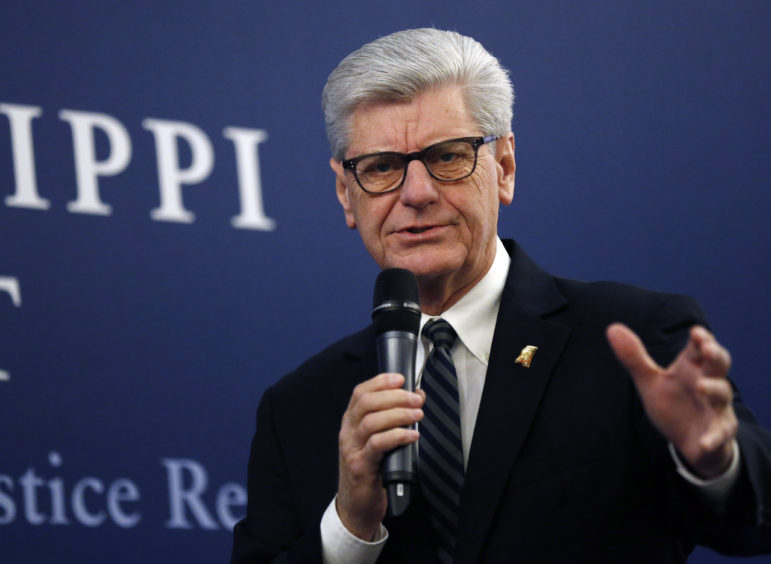 Despite longtime public opposition to the Affordable Care Act, Gov. Phil Bryant has quietly been working in recent months to bring one of the law’s central tenets, Medicaid expansion, to Mississippi, sources in the state’s health care industry tell Mississippi Today.

The efforts come amid a federal judge’s decision Friday to strike down the entire health care law; Bryant is one of 20 plaintiffs who sued the federal government, claiming the Affordable Care Act is unconstitutional. That ruling is expected to be appealed.

Over the last month, Bryant and senior aides in his office have spoken to health care industry executives about the details of a limited form of Medicaid expansion, similar to the 2015 plan then-Gov. Mike Pence oversaw in Indiana, according to multiple sources who have directly spoken to either the governor or his staff.

Expanding Medicaid would represent an about-face for Bryant, a Trump ally who has twice sued the federal government over aspects of the Affordable Care Act. In 2012, his first year as governor, Bryant wrote that he would “continue to resist the expansion of Medicaid and other aspects of the ACA that will have a negative impact on our State economy or its people.”

“The Mississippi Hospital Association approaches the Office of the Governor each year with a new plan to expand Medicaid. We don’t expect this to be a part of our legislative agenda,” said Knox Graham, director of communications for the governor, in an email.

The Mississippi Hospital Association declined to speak to Mississippi Today for this story. When asked for further clarification, Graham said in an email that “the Office of the Governor isn’t going to respond to unnamed sources about hearsay.”

Supporters of the Affordable Care Act say it’s getting harder to argue that expanding Medicaid — which would bring $1 billion in federal funds per year to the state, according to a 2012 report from the Institutions of Higher Learning — would negatively affect Mississippi’s economy. In the last four months, four of Mississippi’s rural hospitals have declared bankruptcy. Since 2010, five hospitals in Mississippi have shut their doors. Nationally studies have linked hospital closures to states’ decisions against expanding Medicaid.

“(Medicaid expansion) would have gone a long way to stabilizing many of these hospitals,” Moore said at the time.

Although Bryant has remained publicly opposed to the Affordable Care Act, he has said a stable health care system is important to the state economy. In August, he hosted his first Governor’s Health Care Economic Development Summit, where he told a room of approximately 200 industry professionals, “We’ve decided to look at health care as an economic driver… like the automobile industry.”

Still, publicly advocating for investment in health care is one thing. Medicaid expansion is something else, and President Obama’s signature piece of legislation remains unpopular among Republicans. Thirteen of the 14 states that have yet to expand Medicaid have Republican governors. The other, North Carolina, has a Republican-controlled legislature.

As a result, people who’ve spoken to the governor’s office say Bryant hopes to avoid referring to the proposal as Medicaid expansion. Pence took the same approach in Indiana with his “Healthy Indiana” program; its website makes almost no mention of Medicaid expansion. Eligibility for this plan is more strict than federal limits, requiring beneficiaries to share monthly costs and create health savings accounts.

But 2019 is an election year in Mississippi, and some Democrats have suggested that Republican-backed Medicaid expansion could slow Democrats’ political hopes. Attorney General Jim Hood, currently the Democratic front runner for governor, has long pushed expansion as a way to stabilize Mississippi’s health care industry, a point he drove home when he announced his candidacy in October.

Although Mississippians are split on overall support for the Affordable Care Act, support for Medicaid expansion has doubled since 2013, going from 37 percent that year to 72 percent in 2017, according to the Center for Mississippi Health Policy.

“(Republicans have) dodged that bullet politically as long as they can, and you better believe Jim Hood is going to make a big issue of it – if nothing else it’s an effort to squelch his momentum and burst his bubble politically,” said Rep. Steve Holland, D-Plantersville, who has publicly championed Medicaid expansion for years.

But the odds of rolling out Medicaid expansion in a Republican-dominated state like Mississippi remain long. One way is through legislative action. But both Speaker of the House Philip Gunn, R-Clinton, and Lt. Gov. Tate Reeves, as well as their Republican-controlled chambers, have remained cool to Medicaid expansion. Asked Tuesday about the likelihood of the Legislature looking into expansion in 2019, Bryant told Mississippi Today: “They wouldn’t take that up in an election year.”

Although Mississippi’s Division of Medicaid told Mississippi Today that rolling out expansion “would likely require legislation,” seven states, including Indiana, have effectively expanded their state Medicaid program by executive order, using what’s known as a Section 1115 waiver. These waivers let the federal government approve experimental, pilot, or demonstration projects that the agency believes are likely to promote Medicaid’s objectives.

Last year, Mississippi, like many states, applied for a waiver that would require Medicaid beneficiaries to either find work or lose their benefits. That request is still pending, and Seema Verma, the head of the federal Centers for Medicare and Medicaid Services, has said she is concerned that approving work requirements in states that did not expand Medicaid could create a “subsidy cliff” where people suddenly earn enough money to lose their coverage.

Under current Mississippi Medicaid rules, income limits for beneficiaries are so low — as little as $306 a month — that taking even a minimum wage job would make someone ineligible for Medicaid. But with expansion, individuals who earn up to 138 percent of federal poverty level, or $1,387 a month, could receive Medicaid. So far CMS has approved work requirements in five expansion states.

Bryant has long said that one of the biggest barriers to expansion has been deciding how the state would pay for it. Under standard Medicaid, the federal government offers Mississippi a cost-match of 76 percent, or more than three federal dollars for every one dollar the state spends, the highest match rate in the nation. For fiscal year 2018, that means Mississippi spent $935 million and received $4.4 billion in federal dollars.

If Mississippi expands Medicaid, that match for the expansion population would soar to 90 percent, or nine federal dollars for every one state dollar spent. Still, that leaves Mississippi on the hook for 10 percent of the costs, or $117 million.

Rather than paying for it from their general fund, ten states have covered the state costs of expansion by taxing hospitals and the private insurers who cover the expansion population. Four pay in part through a cigarette tax. Although Mississippi voted a cigarette tax down last year, several Republicans, including Bryant, quietly supported it, and it’s likely to resurface during the 2019 session.

Although Bryant and many of Mississippi’s other Republican officials have opposed Medicaid expansion since the Obama administration introduced the Affordable Care Act in 2010, expansion was ironically designed for states like Mississippi, which has the highest poverty rates, and among the worst health outcomes and highest percentage of uninsured residents in the country.

“Mississippi, with the highest federal match in the country, would have done very well under Medicaid expansion,” said Roy Mitchell, executive director of the Mississippi Health Advocacy Program, a nonprofit that has lobbied for Medicaid expansion. “We missed a huge economic windfall.”

In 2012, then-Lt. Gov. Bryant privately filed the first lawsuit to challenge the constitutionality of the Affordable Care Act’s individual mandate. The court dismissed that lawsuit. But earlier this year Bryant joined 20 other Republican officials in a different lawsuit, Texas v. United States, arguing that since Congress repealed the ACA’s individual mandate, the law was now unconstitutional. On Friday, a federal judge agreed.

Bryant’s office did not respond to request for comment on that lawsuit.

Although Republican support is far from certain, Democrats said they’re likely to support even a limited version of the law.

“I would salute them if they did anything with Medicaid expansion,” Holland said.

Gov. Bryant quietly in talks about a Medicaid expansion plan for Mississippi