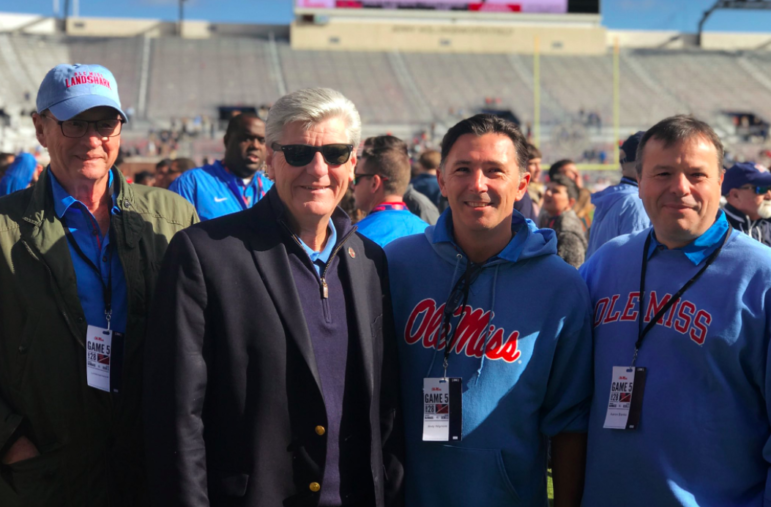 Gov. Phil Bryant used his friendships with Brexit leaders to help a data firm – whose business practices are being investigated in the United Kingdom – do business with the University of Mississippi.

Banks, who bankrolled the campaign for the U.K. to leave the European Union in 2016 (commonly referred to as “Brexit”), is being investigated by several British government agencies about his use of individuals’ data during that campaign. Connections also are being scrutinized between the group and Cambridge Analytica, the company that allegedly stole millions of Facebook users’ personal data to help influence the 2016 U.S. presidential campaign.

Kaiser claimed the University of Mississippi researchers could have held or processed U.K. citizens’ data outside of the country, a possible criminal offense.

University of Mississippi spokesman Ryan Whittington downplayed any connection this week, saying the university “has neither received nor analyzed any data from Big Data Dolphins Limited or Eldon Insurance Services Limited or any entities affiliated with these companies.”

But Whittington acknowledged that Eldon Insurance signed a lease agreement for space in the university’s Insight Park, an incubator for businesses to access the university’s academic and research resources, but said that the university had no “research or educational relationship” with the company.

“No research or educational relationship has been established with either of these companies and the space is not occupied,” Whittington told Mississippi Today. “Any proposed research agreement between UM and an external entity is always carefully vetted by the university to ensure compliance with all applicable laws and policies.”

Details of Banks’ ties to the university were first reported by Magnolia State Live.

Kaiser said that she saw campaign staffers using individuals’ personal data from Eldon Insurance and accused the organization of potentially misusing personal data for political gain. News outlets across the U.K. have reported that use of data would violate the nation’s Data Protection Act, though Banks this week denied the overlap of data usage.

“If the personal data of U.K. citizens who just wanted to buy car insurance was used by GoSkippy and Eldon Insurance for political purposes, as may have been the case, people clearly did not opt-in for their data to be used in this way by Leave.EU,” Kaiser said this week.

Leave.EU attacked Kaiser’s evidence as “a confused litany of lies and allegations” and said that Eldon Insurance did not share data with anyone, according to a Guardian report. “No data has been sent to Mississippi. The unit is still in the planning stage, it employs no one and is not operational,” the group said.

In a interview earlier this year, Wigmore said University of Mississippi data scientists would help develop the Big Data Dolphins model, saying they “met the faculty because they knew the state governor, who they had, in turn, met through their ‘Brexit journey which led them to Trump.’”

The university confirmed on Wednesday that Bryant facilitated the relationship between Banks and the university. Wittington, the Ole Miss spokesman, said, “The governor’s office referred Eldon Insurance Services (Banks’ company) to the university’s research park, as a possible economic development project.”

A spokesman for Bryant, Knox Graham, told Mississippi Today that “upon learning that Eldon Insurance was planning to begin a new research effort at the University of Scotland, Gov. Bryant suggested to Eldon leadership they should look into doing research at a Mississippi university. Ultimately, Eldon was connected with the University of Mississippi.”

“Gov. Bryant has full confidence in the University of Mississippi to make any decisions regarding their relationship with Eldon Insurance,” Graham said in an emailed statement.

Graham noted that “Gov. Bryant has been in London this week for the Commonwealth Business Forum focusing on economic development efforts for the State of Mississippi.” On the Paul Gallo radio show on Wednesday Bryant noted that he facilitated a deal that brought “an insurance business” to Oxford.

“It’s an amazing opportunity for Mississippi in an environment looking forward to Brexit and the trade opportunity it will give the United States.,” Bryant said. “You bring your business to Mississippi — we already have our first one coming to Oxford, we’ll talk about that later. It’s an insurance business.”

Bryant has deep ties with the major players involved, as chronicled in Banks’ 2017 book called “The Bad Boys of Brexit” and reported by Mississippi Today.

How Donald Trump and Nigel Farage met in Mississippi 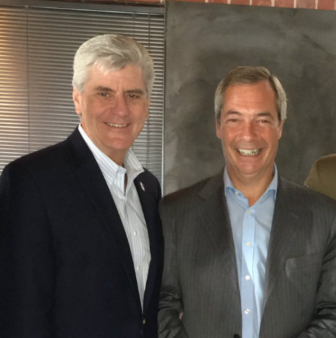 Gov. Phil Bryant, left, poses with Nigel Farage during the Brexit leader’s visit to Mississippi in 2016.

The governor and Brexit leader Nigel Farage struck up a friendship after a chance meeting in Cleveland, Ohio, for the 2016 Republican National Convention. The peculiar relationship led to the governor introducing Farage with then-presidential candidate Donald Trump in Jackson in 2016.

Bryant has since hosted the Brexit leaders in Mississippi several times and has regularly appeared on Farage’s radio show in London.

During an Ole Miss football game on Nov. 2, 2017, Bryant was in the stadium’s luxury skyboxes with Banks, Wigmore and British billionaire Michael Ashcroft. Lord Ashcroft even fired off the on-field cannon used when Ole Miss scores a touchdown, according to his Twitter post.