Roy Harness always has considered himself to be innovative.

In 1986, those traits resulted in a conviction for forging checks, for which he served a two-year sentence. Today, Harness uses those qualities in the hope of finding young people dealing with issues he faced (addiction, homelessness) and steering them away from the decisions he made more than 30 years ago. 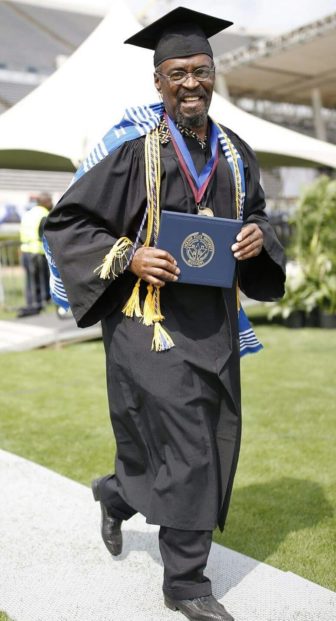 Harness said people who knew him were surprised to learn about the lengths he went to feed his addiction.

“On drugs and alcohol, you can get pretty creative,” said the McComb native, who is now working towards a master’s degree in social work at Jackson State University.

Despite turning his life around, Harness feels unfulfilled in one important way.

Under Mississippi law, forgery is one of the felonies that removes a convicted person’s right to vote. Harness is a plaintiff in a lawsuit challenging the rule, arguing that it disproportionately disqualifies African-American voters and echoes past voter-suppression policies such as poll taxes and literacy tests.

“It’s the same soup, just warmed up in a different bowl,” said Harness, 62.

Attorneys for Secretary of State Delbert Hosemann, the defendant in the suit, deny all the claims. The office for Attorney General Jim Hood, which represents Hosemann, said it cannot comment on pending cases.

Conviction data shows that the disqualification laws disproportionately impact black felons. Advocates for reform say the data underscore the need for legislation currently pending that requires the Legislature to closely examine the state’s felon disenfranchisement and the disproportionate effect those laws have on African Americans.

According to a Mississippi Today analysis — looking at conviction records from the Administrative Office of Courts that span from 1994 until last November — 56,255 Mississippians have lost the right to vote in that time due to felony charges.

Sixty-one percent of those who have lost their right to vote are African-American, despite the fact that African Americans represent 36 percent of the state’s total voting-age population. 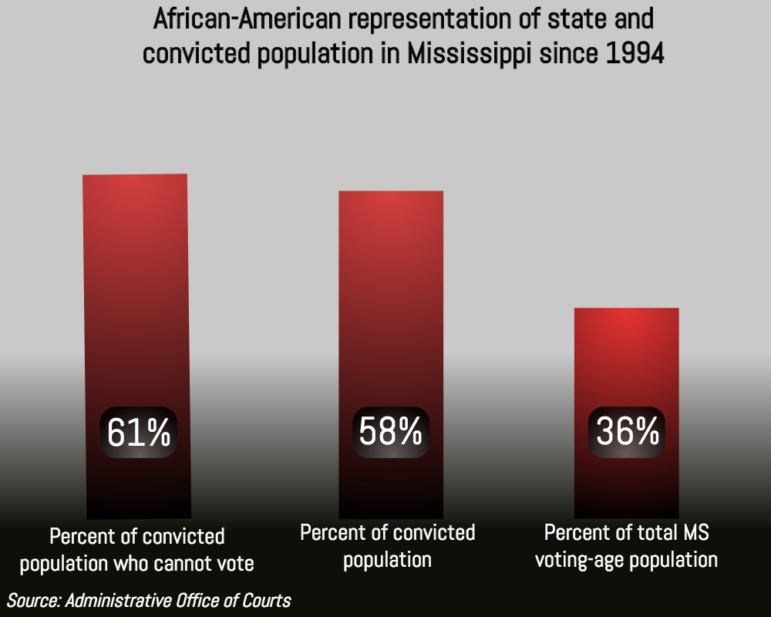 Harness doesn’t see why his past conviction should still prevent him and others from voting if they have completed their sentences and repaid their debts to society.

“If you served your time for the crime, lived a productive life, I don’t see any reason why a person shouldn’t get their voting rights back,” he said. “Why do you want to keep punishing a person for something they did (more than 30) years ago? People make mistakes. Don’t keep punishing people for things they did when they were young or their head wasn’t right.”

The laws at the heart of Harness’s lawsuit can be traced back nearly 130 years.

Harness, through attorneys, argued in the lawsuit that the framers of the state constitution, which governs Mississippi today, believed that several crimes were more likely to be committed by African Americans and were therefore were an avenue for disenfranchisement of black voters.

The disqualifying felonies that still exist from the Mississippi Constitution of 1890 are bribery, theft, arson, obtaining money or goods under false pretenses, perjury, forgery and embezzlement, all of which the lawsuit seeks to remove. Murder and rape were added in 1968, but Harness’s lawsuit is not challenging those. Other felonies, such as child pornography and drug trafficking, are not disqualifying.

In 1896, the Mississippi Supreme Court wrote, “Restrained by the federal constitution from discriminating against the negro race, the convention discriminated against its characteristics and the offenses to which its weaker members were prone” by choosing those felonies.

Mississippi Today’s analysis is bolstered by a recent study published by The Sentencing Project, One Voice and the Mississippi NAACP showing that nearly one in 10 of all Mississippians are disenfranchised (second to only Florida). However, 16 percent of the state’s black population is prohibited from voting because of a felony.

Almost every state disqualifies felons from voting for at least the person’s time in prison; Mississippi, though, is one of only 12 states that withhold voting rights from a felon after they’ve served their sentence and completed probation. Research shows such a prohibition can suppress African American voting.

In states with lifetime bans, black voters are 12 percent less likely to cast ballots, while white voters are only one percent less likely, according to a 2009 study from the Social Science Quarterly. Of the 6.1 million disenfranchised Americans, more than three-quarters are not incarcerated, having successfully completed their sentences, The Sentencing Project found.

Dr. Corey Wiggins, executive director of the Mississippi NAACP, said that the number of disqualified voters is a concern for the state, particularly for its black community.

“When you start to trace the history of these laws that have been in place and that are disenfranchising the vote, you see this track record of laws that tend to be targeted specifically towards African Americans,” he told Mississippi Today.

“It’s an issue considering that there are over 200,000 Mississippians who are currently (disenfranchised),” Wiggins said, “and it’s a hard process to restore those rights.”

Disqualified voters can restore their rights through legislation, commonly called a suffrage bill, or through a governor’s pardon. But only 156 (less than 1 percent of the total disqualified pool) since 1997 have succeeded through legislation, according to the Legislature’s records. Then, after Gov. Haley Barbour’s pardons of almost 200 people stirred controversy and prompted a legal challenge, Gov. Phil Bryant stated in 2012 that he would only grant pardons to people who are wrongfully convicted. 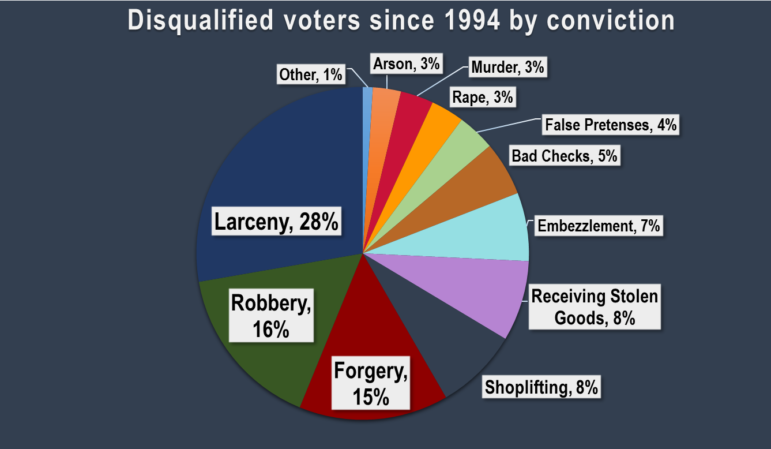 As seen in the pie chart above, the felonies that most commonly disqualify Mississippians from voting are larceny, robbery, forgery, shoplifting and receiving stolen goods.

Black disqualified voters make up approximately half, if not more, of each of the top disqualifying felony convictions, as seen below. 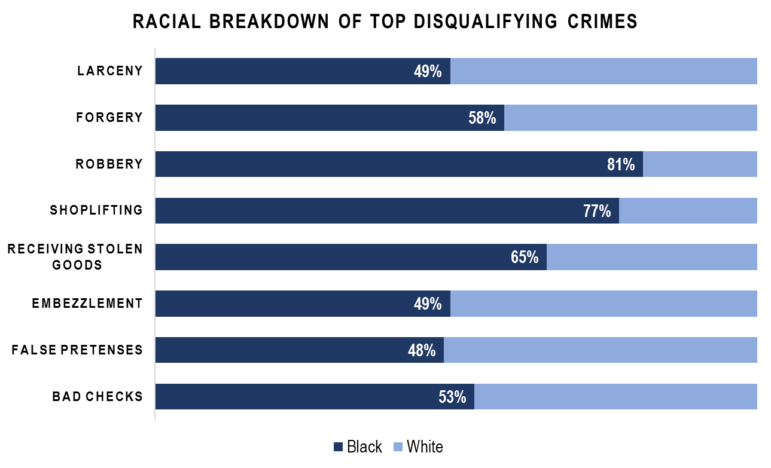 Rob McDuff, the attorney handling the lawsuit with the Mississippi Center for Justice, said this data shows the unjust effect of the disqualifying laws.

“These statistics demonstrate that this racist provision from the 1890 Constitution continues to have a discriminatory impact,” McDuff said. “It is a clear violation of the Equal Protection Clause of the Fourteenth Amendment and we are asking the federal court to strike it down.”

If successful, the lawsuit could restore voting rights to at least 52,599 people (the previous total minus murder and rape cases), although it is unknown how many of those are still alive and would vote in Mississippi.

Legislation that is currently the subject of debate could be the first step in examining how the state restores those rights.

House Bill 774, introduced by Rep. Bill Denny, R-Jackson, calls for a study on the impact of voter disqualification, specifically regarding nonviolent felons such as Roy Harness. The bill passed the House 114-7 and is now in the Senate.

Sen. David Blount, D-Jackson, vice chairman of the Senate Elections Committee, said that felons should be disqualified but that there should be a better process for restoring voting rights.

“I believe that Mississippi needs a process where by people who have lost the right to vote can regain the right after they have paid their debt to society,” he said. “I believe that people convicted of a felony should lose their right to vote during the time they are incarcerated and until they have completed all the terms of their punishment, including probation.

“I hope we can address this issue during this session,” Blount said.

Blount represents Hinds County, the state’s most populous and the county with the most disqualified voters with 4,674.

Below is a map of voters disqualified due to felony charges in each county according to data from the Administrative Office of Courts. The counties with the highest rates of disqualified voters per 1,000 residents are Pike (24), Tunica (23), Grenada (22), Panola (20), Coahoma (20) and Humphreys (20).

Harness has never voted in his life. He believes that in addition to voting being his right as an American citizen, he wants to use his vote to voice his opposition to state and federal policy proposals, especially regarding health care and immigration.

“This country is built on immigrants,” he said. “A lot of people get comfy in this country and won’t take low-wage jobs. Immigrants need the opportunity to better themselves as well as people in the United States. I don’t see a problem with it. Like Martin Luther King (Jr.) said, we came on different ships, but we’re all in the same boat now.”