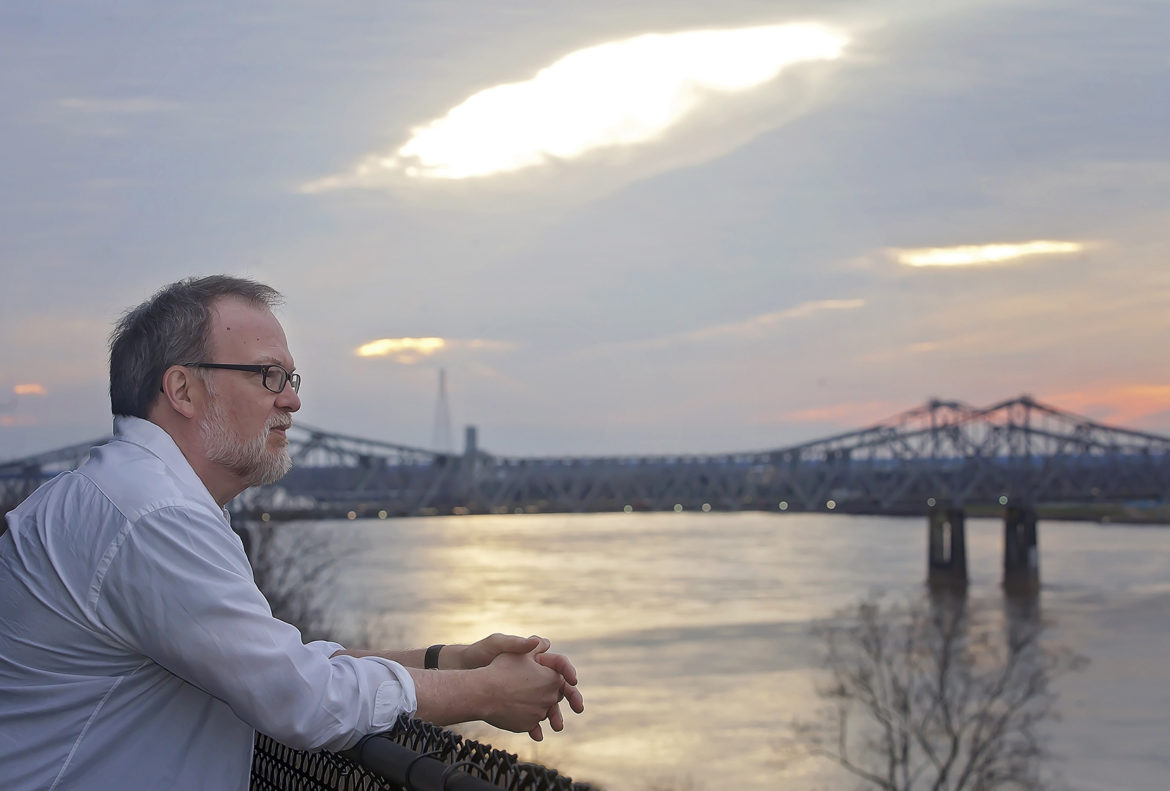 Greg Iles overlooks the Mississippi River in his hometown of Natchez.

This story is our weekly ‘Sip of Culture, a partnership between Mississippi Today and The ‘Sip Magazine. For more stories like this or to learn more about The ‘Sip, visit thesipmag.com.

Tearing open the wounds of the past is an uncertain business. When that past involves smoldering racial tension and injustice, it can be incendiary.

Author Greg Iles has learned, however, that dealing with the past also can cauterize what would otherwise fester. When Natchez Burning, the first book in a trilogy that deals bluntly with the complexities of race in Mississippi, began bringing black and white folks together, he felt relief.

“Until it came out, nobody had any idea what would happen,” he said. “But John Evans from Lemuria (Books in Jackson) told me, four months after it came out, ‘You’ve done something that nobody else I’ve seen come through here has done yet. You’ve got white people and black people reading about race.’”

When Iles asked him why, Evans told him, “Because you’re willing to portray it as bad as it really was.” 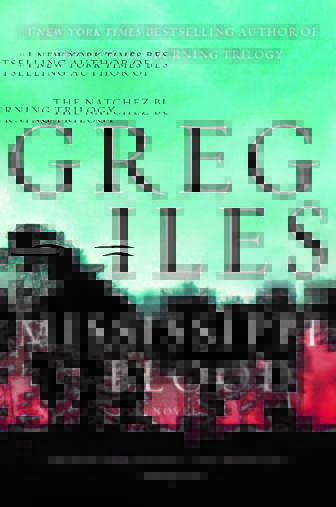 The Natchez-based author’s quest to tell “the unvarnished truth” about the Civil Rights era over three books totaling more than 2,000 pages was a gamble that cost him his publisher. But, after narrowly escaping death in a car accident in 2011, when a pickup truck plowed into his Audi on U.S. 61 south of Natchez, Iles no longer cared about his book numbers or what his publisher or agent thought about his work.

“When a truck literally slams an inch from your head and rips your aorta, you suddenly perceive that life is truly ephemeral in a way that you don’t before,” he said.

“After the accident, I realized I can’t halfway do this. You can’t deal with race and family and those things pulling punches.”

On Tuesday, the Natchez trilogy he began with Natchez Burning in 2014 and continued with The Bone Tree reaches its denouement in the final installment, Mississippi Blood.

Despite the trials he has endured, Iles never cared for the safe path. In a literary scene that segments “serious” writers from commercial authors, Iles found his way by hacking away the kudzu from the old idols of the South and spinning those galvanizing topics into thrillers that have taken him to the top of the New York Times bestseller list.

After spending his first several years in Germany, Iles moved with his parents to Natchez, where he worked summers laying pipe and loading trucks on mostly black crews. His interests leaned toward playing music, which he did professionally for about a decade after college. Before he graduated from Ole Miss, though, he took a class under Willie Morris that broadened his perspective on writing. 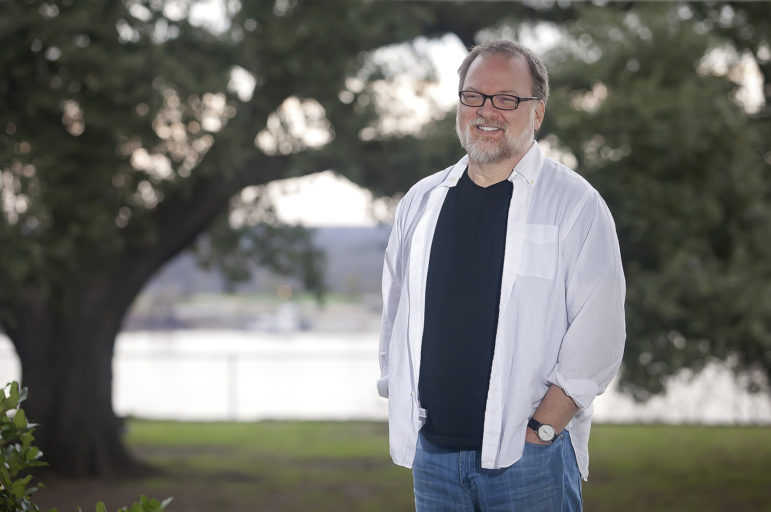 Author Greg Iles in Natchez, the setting for his latest book, Mississippi Blood

What Morris did for Iles — and other young writers like Donna Tartt and John Grisham  — was show him that it was possible to make a living, and a life, from writing. He brought authors such as John Knowles to speak to the class. Iles listened to author James Dickey talk about Deliverance before a class screening of the film at the Hoka theater. Those experiences altered the course of several lives, and they always stuck with him.

“You grow up in Mississippi in my generation, you’re expected to be a doctor or lawyer if you’re gonna succeed,” said Iles, who will turn 57 next month. “It doesn’t enter your mind to be an artist.” 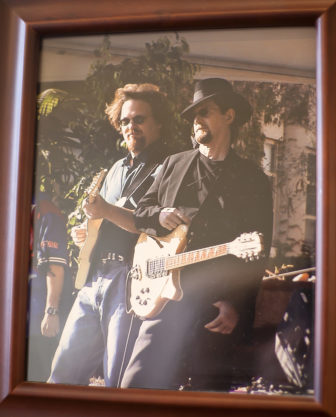 Photo by Melanie Thortis / © The 'SIp

A photo of Iles, left, with Rock Bottom Remainders bandmate Roger McGuinn, best known for his work with The Byrds.

Iles had two paragraphs written for his first novel, Spandau Phoenix, when his band Frankly Scarlet disbanded. He committed the next six months to finishing the book and, when it came out in 1993, Spandau Phoenix became his first in a string of books to land on major best-sellers lists. His popular character Penn Cage first appeared in The Quiet Game in 1999 and, although Iles never intended to build a franchise around a recurring character, the pull of story lines brought Penn back for three more thrillers before Iles conceived of the Natchez trilogy.

Mississippi Blood finds protagonist Penn unraveling the crimes of the racist Double Eagles and VK gangs while his father, Tom Cage, sits on trial for allegedly murdering Viola Turner, his black nurse and mistress. Like Penn, Iles grew up the son of a doctor who provided services to the black community. He is quick to assert that although Tom is loosely based on his own father, “[Tom’s] sins are not my father’s sins.”

Like Iles after his accident, Penn takes more chances in Mississippi Blood, now that his life has been upended by his father’s murder trial. He pulls a gun on members of the VK gang and gets his hands dirty eluding both the gang and the FBI agents who are protecting him to secure witnesses be believes can help his father. Before it’s over, though, Tom has to deal with all that he has wrought.

“Even a good guy like Tom sees things through a sort of rose-colored lens without even being aware of it,” Iles said. “We all tend to judge ourselves in the fairest light, all the time. And that’s not how history will judge us.”

Iles doesn’t carry the weight of his characters and stories on his shoulders, at least not visibly. He is a lively, animated speaker with a passion for music and arts and with strident moral and political beliefs. As a man who bears the scars of life so deeply, he seems somehow unaffected by its burdens.

Iles remembers getting his first big stirring of hope for race relations in his home state while helping coach his son’s little league game, where teams of white and black kids played together on fields that were still segregated when he was a kid playing Dixie Youth baseball. But on his son’s team, there was no favoritism or prejudice in who played what — it was a meritocracy based entirely on talent.

“I’m not saying that’s the be-all and end-all and everything’s solved, but I knew if you’ve got black kids and white kids on those old segregated fields playing baseball, whooping it up, you’re on the road to something good,” he said. “If you can have that, you can have it all.” 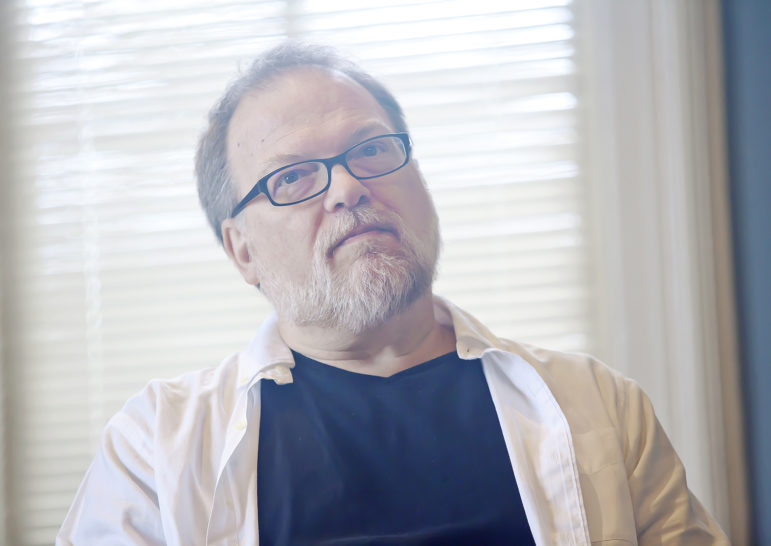 Some other things have changed, as well, especially since Iles has taken on the ghosts of the old South in his books. When he gave the Statehood Address at the Old Capitol Museum in Jackson in 2016, he brought a security detail for the first time ever because he anticipated threats after speaking out against the state flag of Mississippi.

“[There’s a] dichotomy in Mississippi to me,” he said. “On a one-to-one scale, relations are often very, very good between the races, even in places you assume are very prejudiced. It’s when you get together in groups or start talking to people as groups that Mississippi suddenly becomes polarized.

“I love the South,” he added, “but it doesn’t do anybody good to pretend it was a bed of roses. It clearly wasn’t.”