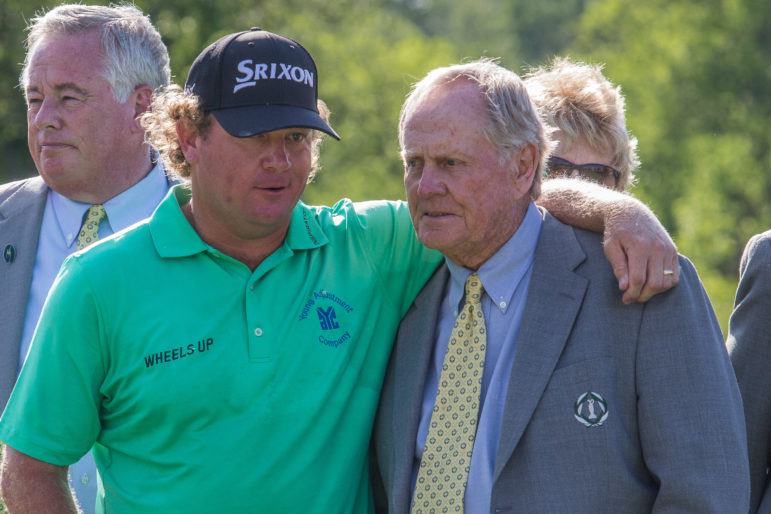 William McGirt puts his arm around Jack Nicklaus after winning The Memorial Tournament at Muirfield at Dublin, Ohio, last June.

William McGirt, No. 42 in the world golf rankings, won a whopping $3.6 million on the PGA Tour this past season.

McGirt won Jack Nicklaus’ own golf tournament, The Memorial, last June, then walked off the 18th green arm-in-arm with Jack, himself. He won a three-year PGA Tour exemption and invitation to The Masters, and the rewards keep coming.

Next week, he is eligible to play for the $8.5 million purse in the World Golf Championship (WGC) event at Shanghai. It is a no-cut event, so essentially he is guaranteed to win money.

McGirt will be in Jackson instead.

Get this: Even though he is not allowed, by PGA Tour rules, to play in the Sanderson Farms Championship at Country Club of Jackson, McGirt wants to come and support the tournament. He plans to fly to Jackson Tuesday night for the pro-am pairings party, play in Wednesday’s pro-am and then fly back home to South Carolina.

“It’s about two things,” McGirt said Tuesday night by phone. “One, I have no interest in flying halfway around the world to China to play in a golf tournament. Two, I want to support a tournament I love and a cause I believe in. So that’s what I am going to do.”

First, he had to clear it with the PGA Tour, which he did. The tour’s rules strictly forbid a golfer skipping a WGC event to play in another tour event. But there’s nothing in the rules about playing in the pro-am. So McGirt will take what he can get.

And so will the Sanderson Farms Championship.

“I was blown away when I heard about what Will wanted to do,” said Steve Jent, the Sanderson Farms Championship’s executive director. “To have that kind of support from a player is just phenomenal. It means a lot to us. Will is such a solid, solid individual. He’s gonna do what he believes in.”

McGirt has played in the Sanderson Farms tournament the last five years, the last two at Country Club of Jackson. He finished tied for second to Peter Mainati last year when his 25-foot birdie putt on the 18th narrowly missed the cup.

“Last year, Joe Sanderson (Sanderson Farms CEO) stepped up and guaranteed to sponsor the tournament for 10 more years,” McGirt said. “That’s huge. We, as players, need to support that. We need to support what that tournament does for that children’s hospital there. That’s why I am coming there, to support all that.”

Joe Sanderson did sign an agreement with the PGA Tour to continue sponsoring Mississippi’s only PGA Tour event through 2026. Last year, the tournament raised more than $1.1 million for Batson Children’s Hospital at University of Mississippi Medical Center.

McGirt, a 37-year-old father of two young children, wants to spend as much quality time as he can with his family. When we talked Tuesday, he was the only healthy one at home and was fitting in an interview between changing diapers, bedtime stories, cleaning dinner dishes and making sure everyone got their medicine.

Yes, he says, he knows his decision to spurn the China tournament and come to Jackson instead is unusual. No, he says, he has had no second thoughts since making the decision.

“It’s really a two and a half week commitment when you get down to it,” McGirt said. “You spend 12 hours in a metal tube flying halfway around the world, and then two or three days getting over that. Then, you fly back another 12 hours and it takes your body a week or so to get over that. I just don’t want to do it – no interest at all in doing it, really. I’d rather support Steve (Jent) and Joe Sanderson and the hospital there.

“There’s something else. Joe Sanderson is bringing one of his poultry places to the area I grew up in in North Carolina,” McGirt said. “That’s going to be a lot of jobs for a lot of folks that need jobs where I come from.”

McGirt’s decision is not without precedent here. Back in 1996, Jim Gallagher Jr. skipped the British Open to play here when the tournament was at Annandale. There was no rule against it then, and Jim’s wife, Cissye, was nine months pregnant. Nevertheless, Gallagher was criticized by other players, including Davis Love and Brad Faxon, for skipping a major.

“My situation was a little different, but I understand where Will is coming from,” Gallagher said. “I think it’s great what he’s doing to show support for (the Sanderson Farms Championship)”

Jent said McGirt will be part of a panel discussion at the Tuesday pro-am party and will be in one of the featured pairings in the pro-am.

Said McGirt, “I’d love to play in the tournament itself, but I can’t so I’m going to do whatever I can to help.”