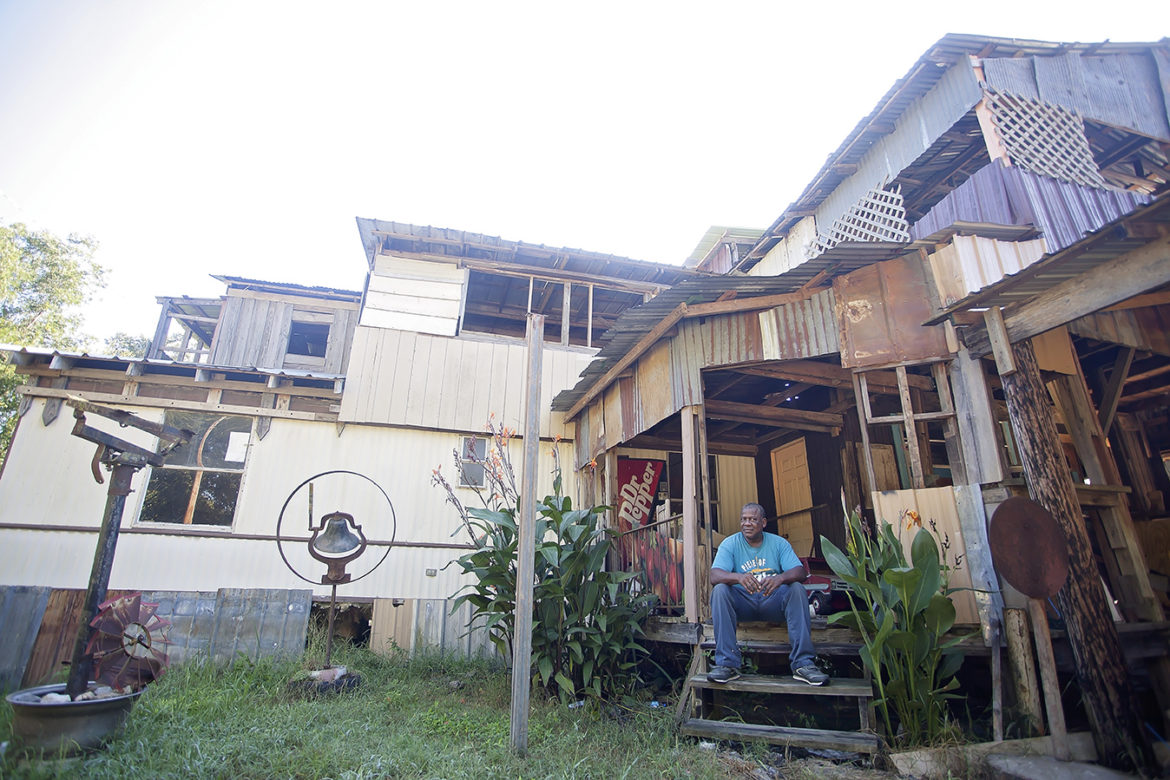 Folk artist Earl Simmons sits on the front porch of his art gallery, which connects to his home. He has been rebuilding the gallery after a massive fire destroyed the building in August of 2002 and again in 2012.

BOVINA— When Earl Simmons was a boy growing up, he was enthralled with creating things. He figured out that he had a talent for drawing and painting at a young age, and from there, he began to build his own toys using a Coke bottle as a hammer.

And as he grew, so did his work. 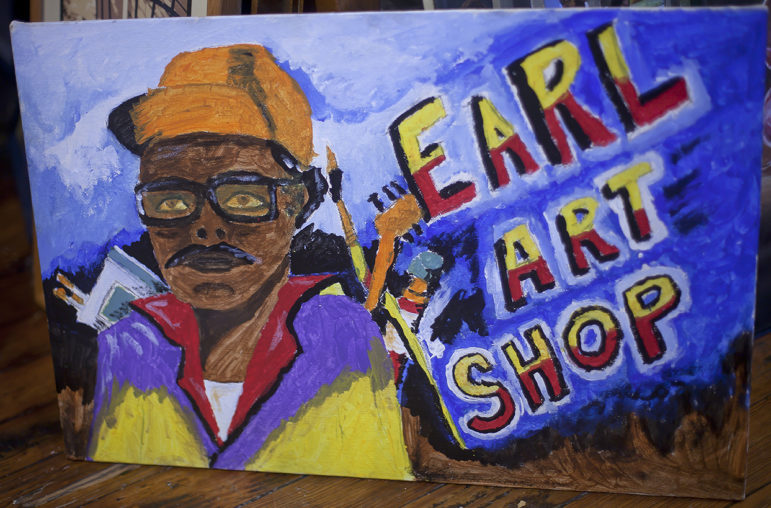 Simmons’ art can be found all over — from the House of Blues in Orlando to the Mississippi Museum of Art in Jackson and the Attic Gallery in downtown Vicksburg, where his work will be included in the gallery’s 45th anniversary show in October. But his largest piece sits just off Warriors Trail in Bovina, a home and shop that the 60-year-old built with his own two hands — more than once. 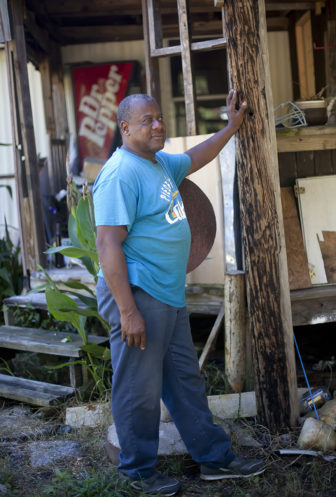 Folk artist Earl Simmons stands near the front porch of his art gallery which is being rebuilt after two massive fires.

“I was born and raised right here in this same spot,” Simmons said, adding that he was one of seven siblings. “I started drawing, and it went from there.”

On that property where he grew up, Simmons built himself a three-story structure, complete with a café, art gallery and workshop. Visitors could tour and take home souvenirs from the gift shop inside.

“That was the biggest one I’d ever built,” Simmons said of the structure. “It got so hot during the fire the asphalt got soft out there. Thank God I didn’t get burnt up is all I can say.” 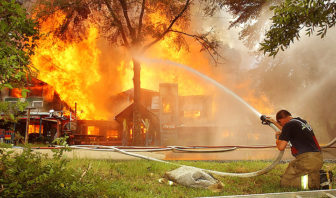 In August 2002, a Culkin volunteer firefighter rests his head while fighting the blaze at the home and gallery of Earl Simmons in Bovina.

So after the fire, Simmons got right back to work rebuilding Earl’s Art Shop. But just 10 years later, in 2012, another blaze ignited and tore through the building, destroying just about everything.

“There wasn’t nothing left,” Simmons said. “It takes you 50 years to build something up and it’s gone in a second like has nothing ever been there. And there’s nothing you can do but try to save your tail.”

With the help of some donations, Simmons began the process of rebuilding again. This time, the building sits a little farther off the road, and a trailer makes up the middle of it. 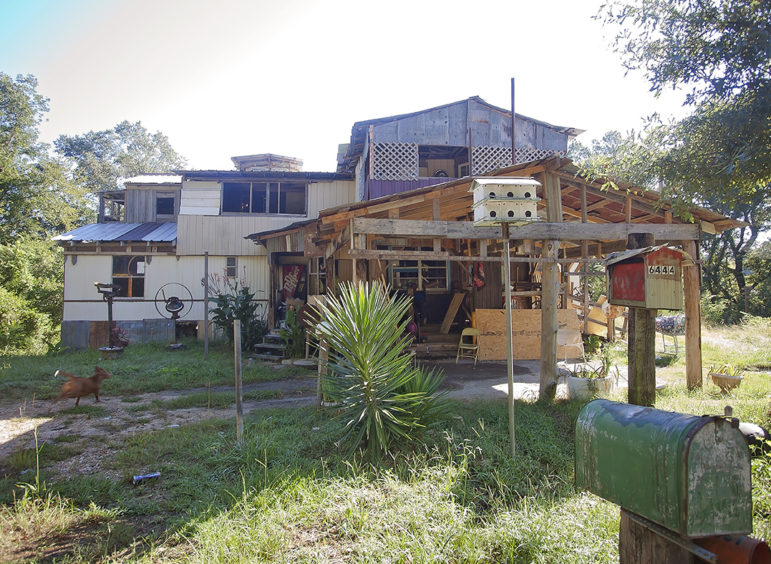 Folk artist Earl Simmons’ home, which he built by hand and was forced to rebuild after two fires. 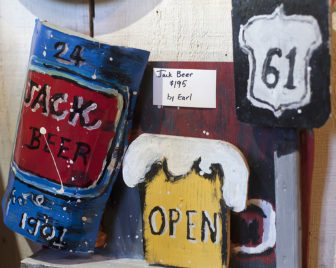 His new house has three bedrooms and two bathrooms, plus he’s working on adding an art gallery upstairs.

“I put it together, from the steps to the doors,” he said gesturing around the building.

But Simmons’ home and shop isn’t the only thing he spends his time working on. On Oct. 7, his work will be featured along with 23 other artists at the 45th anniversary of the Attic Gallery in downtown Vicksburg. The gallery is oldest in the state still open for business with the original owner.

The theme of the show will be “Still Standing” and include a mixed bag of pieces, from paintings to clay sculptures. 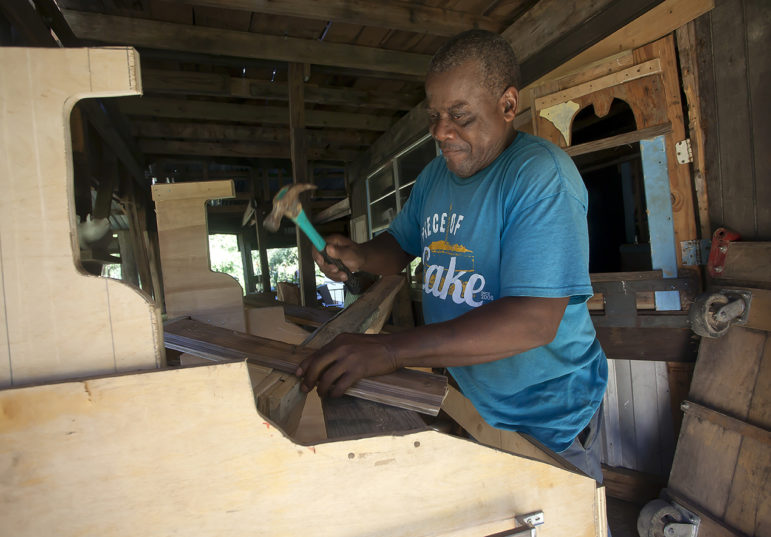 “I think Earl is sort of a genius in what he does,” said Lesley Silver, owner of the Attic Gallery. “He sees things differently; and when he comes in here, he comes in with eyes that get really excited about seeing other people’s work.”

Usually, Silver calls Simmons to give him a heads-up about the theme of a show, and what he comes with is his interpretation of that theme.

Simmons said, unlike most artists, he likes to focus on the old instead of the new.

“I go backwards,” he said. “I do old steam engines and buildings. I like the old stuff.”

At the Attic Gallery, Simmons’ work ranges from Coca-Cola cutouts to chickens and tamales.

On his front porch, from underneath an old school bus seat he uses as a couch, Simmons pulled out a wooden cutout of a church with a sunset behind it. It’s not been painted yet, but he said it will be a sight to see when it’s finished. 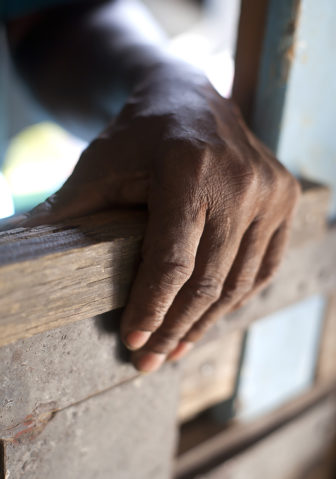 “Sometimes I can do stuff quick, but it’s best to take your time. You do it best when you take your time,” he said. “I just like to work with my hands and my brain.”

Simmons can paint, sculpt, draw, and, of course, build, but he says he doesn’t really have a preference for the kind of art he makes. He does, however, know that he can’t waste the ability he has.

“I had a talent. I started throwing stuff together when I was 5 years old. Right now, I’m still doing it,” Simmons said. “God wants you to use your talent — not just play with it.”

The Attic Gallery’s anniversary show, “Still Standing,” will showcase work by more than 20 artists, including Simmons, on Oct. 7 from 7 to 9 p.m. The gallery is located at 1101 Washington St., in downtown Vicksburg.