This story is our weekly ‘Sip of Culture, a partnership between Mississippi Today and The ‘Sip Magazine. For more stories like this, visit The ‘Sip’s website.

Hear that famous voice and you expect something wise.

Morgan Freeman can explain the intricacies of Hinduism, which he’d learned amid his worldwide ramblings — he’s made recent trips to Guatemala, Jerusalem, Egypt and India. But, deep-voiced and resonant, he admits there’s no lesson at all.

It’s just a little piece of trivia to recount.

Freeman’s intellect is sharp and sometimes contradictory: he is clear-voiced and opinionated, but he does not want to be the “voice of God.” He called that an old joke — and a tiring one.

Freeman recently visited an elementary school library in Charleston, Mississippi — his home now, or at least his resting point between his journeys. Here he likes to “cave up,” he said.

With one stoplight, one grocery store and around 2,000 people, nearly half of whom live below the poverty line, it’s a strange home for a world-renowned star. But he’s called it his safest place — and, in another contradiction, a place that has no assets.

“We’re trying to build assets,” he said, lifting his hands to indicate the bright books on the surrounding shelves. “This is the best shot.”

Freeman knows the dismal facts. Mississippi’s education system is perpetually ranked as one of the nation’s worst; based on recent ACT scores, only one in eight high school graduates is fully prepared for college. For black students, who make up 85 percent of the public-school students in Tallahatchie County, where Charleston is situated, that number drops to 1 in 30.

“It just didn’t sit well,” Freeman said. “Moving back home, I just couldn’t stand the idea of living in a state that was that stupid.”

Freeman attended elementary and high school in Mississippi, and remembers a better education.

“Even though we were segregated, we still had a really terrific system,” he said. “I could quote Chaucer, I could quote Shakespeare — I still can. That’s what we had to learn.”

In high school in Greenwood, he sang in the glee club, argued on the debate team, and played in the band, traveling to compete with other schools. He won his first acting award, a statewide prize for a one-act play, as a 12-year-old.

Since he moved home 25 years ago, he’s given widely to arts and education organizations.

“But if you don’t have a really targeted focus, you can get lost in such a broad vision,” his daughter, Morgana Freeman, said.

Morgan Freeman stands inside the Charleston Elementary gymnasium with his daughter Morgana Freeman, who runs the actor’s Tallahatchie River Foundation.

Three years ago, when she took over his philanthropic organization, the Tallahatchie River Foundation, she sharpened its mission. She wants to overhaul early childhood education in Tallahatchie County. She wants students to “thrive by third grade.”

The research is clear: investing in effective pre-kindergarten can save money — as much, in some studies, as $12 for every dollar spent. But experts bemoan the state’s perpetually low funding.

In 2014, Mississippi paid for statewide pre-kindergarten for the first time — but just $3 million, enough to affect about 6 percent of Mississippi’s 4-year-olds. A national literacy test that year showed that two-thirds of the state’s kindergarteners were not ready for school. Small, rural counties like Tallahatchie face some of the steepest challenges.

The Tallahatchie River Foundation aims to help such counties support their children. Their first move was to launch TELA, or Tallahatchie Early Learning Alliance. The organization supports community efforts to provide holistic assistance to young children in the county — training for excellent early childhood educators, resources to local schools and childcare providers, and support for new parents.

Morgana — who calls herself a city girl — said that after early efforts, she had to learn a key lesson: You need to listen before you can make change. Now that idea is built into the foundation’s five-year plan, which launched in June. She wants community itself, rather than the foundation, to take ownership of TELA.

“The foundation is built on collaboration,” she said. “No one can do this work alone.”

“Listen to her,” her father said, rising jokingly, as if this were the final word that need be said. Listening is a role that suites Freeman just fine. Despite his commitment to education, when asked if he has a vision for the ideal classroom, again he demurred.

“Give it to the experts,” he said. “I’m not an expert on any of this. I just happen to have some money.”*

He didn’t always. Born in Memphis in 1937, Freeman moved from community to community as a child — from Mississippi to greater Chicago and back. After high school, he turned down a drama scholarship to Jackson State University, thinking it couldn’t lead to Hollywood. Aiming simply to get out of the state, he joined the U.S. Air Force.

But he soon realized he preferred the movie version of the military to the real thing. So, in 1961, 11 years after winning his statewide prize, he caught a Greyhound bus to Los Angeles. While attending dance and acting class, Freeman worked clerical jobs. He tried his luck in New York, too, where between auditions and Broadway gigs, he kept up a stream of temp jobs.

“There were a few times where I thought, ‘OK, I’m going to spend the rest of my life doing whatever I happened to be doing to eat,’” he said. “Even after my career had gotten what I had thought was a good, firm foothold, I had to say, ‘OK, my 15 minutes are up, now what?’”

When he was nearly 40, his luck turned: he landed a role on The Electric Company, a Children’s Television Workshop program for kids who had aged out of Sesame Street.

It was not a role he relished; those years were tough in their own way, marked by drinking and divorce. But he had money and a career.

Finally, in 1987, nearly 50 years old, he scored a role in Street Smart. His performance earned critical raves. Within two years he starred in Glory and Driving Miss Daisy, launching a nearly unbroken series of acclaimed performances. Since, he’s won an Academy Award, a Screen Actors Guild Award, and a Golden Globe; he is the fourth-highest grossing actor of all time.

A short inventory of 78-year-old Freeman’s recent filmography: he’s played a government scientist seeking to save the world; a U.S. senator; the speaker of the House and eventual U.S. vice president; and an all-powerful wizard. In a commercial that aired during the United Nations climate talks in Paris last year, Freeman spoke as the voice of the Earth. In 2003’s Bruce Almighty, he became our Hollywood stand-in for God.

No wonder he seems to have lessons to teach. But that voice, like so much in his life, is the result of hard work. Early on, he practiced speaking slowly, enunciating his final consonants, shedding his Southern accent and deepening his tone.

But, Freeman does use his voice to guide. The foundation has just rolled out a messaging campaign, with Freeman as narrator, pitching Mississippians statewide on his daughter’s key idea — students must “thrive by third.”

And in a six-part documentary which aired on the National Geographic channel in April, he shared, as the title puts it, “the Story of God.” It was for this project that Freeman, acting as producer and narrator, recently traveled the world.

On the subject of God, Freeman said he wants to make clear that he is not an atheist.

“Write that down,” he said. “Morgan Freeman believes in God.”

What he does believe, though, is idiosyncratic: he identifies with Zoroastrianism, an ancient Persian religion little talked about outside of history class.

He held up his hand to tick off its three key principles, seemingly fuzzy and warm: good thoughts, good words, good deeds.

“That’s all that life requires of you,” he said with a mischievous glint in his eye. “After that, have babies and die.”

At one point, noting that the biggest employer in Tallahatchie County is a prison, Freeman’s voice dropped, almost mournful.

He’s at his most open when he speaks of his adopted home state. At one point, he called it special. Why? What makes Mississippi different, he replied, is the way we are stuck in the Confederacy. He enunciated that final word with mock grandeur.

The state flag, the last in the nation to retain the Confederate saltire, is not a symbol of heritage, as many argue, he said.

Of course, Freeman still came. He said he had a “quiet epiphany” while visiting his parents in the early 1980s, just as his career was beginning to rise.

Charleston, Miss., in the Delta is where Freeman goes to relax between projects.

In a town like Charleston, he said he can go to the grocery store and no one will follow wielding cell phones.

Morgana shook her head. “Yes, they do.”

“I haven’t seen them,” Freeman replied.

His daughter is right. Cell phones did appear on a recent trip home for Freeman. It was after a ribbon-cutting ceremony for a new wellness center in town that Freeman and his daughter attended. A woman in the lobby made giddy plans to get that selfie with a man who was her favorite actor, as she told her friends.

Freeman smiled politely, then, photo done, said goodbye to his daughter, and climbed alone into a gleaming black sedan. His 160-acre ranch was somewhere in these hills. And, Freeman seemed eager to head home — to, perhaps, cave up in his safest place. 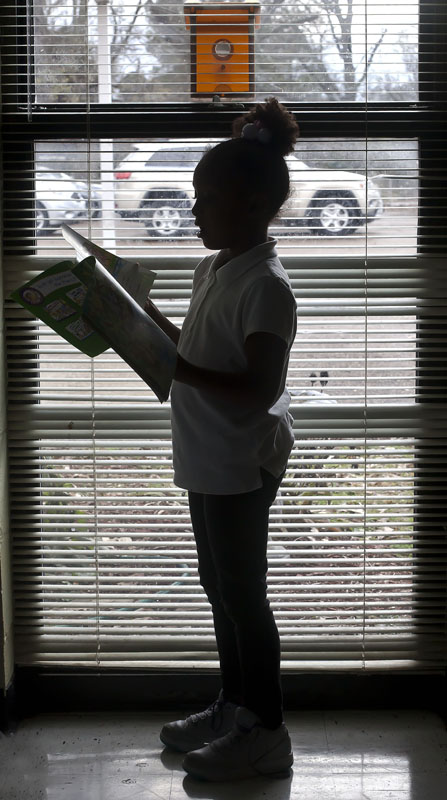 Preschooler Nevaeh Jones is silhouetted against the window as she reads aloud to fellow students at Charleston Elementary. 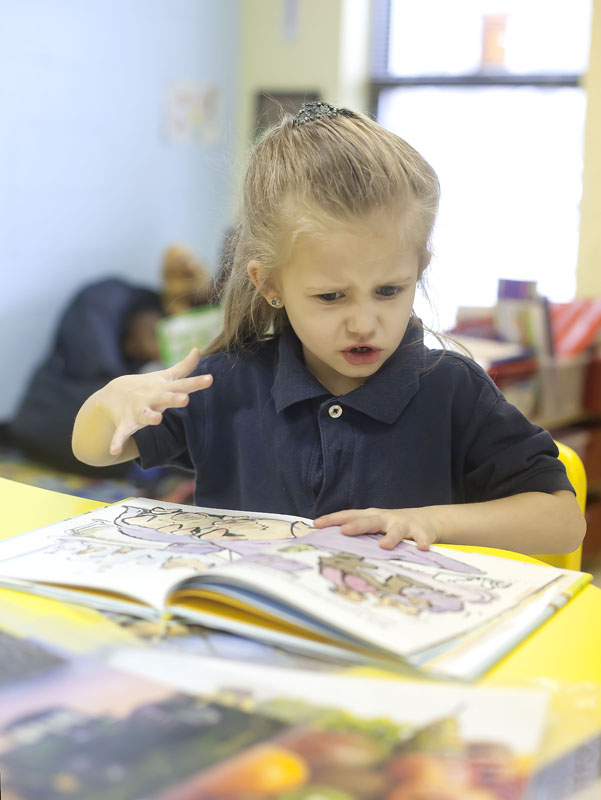 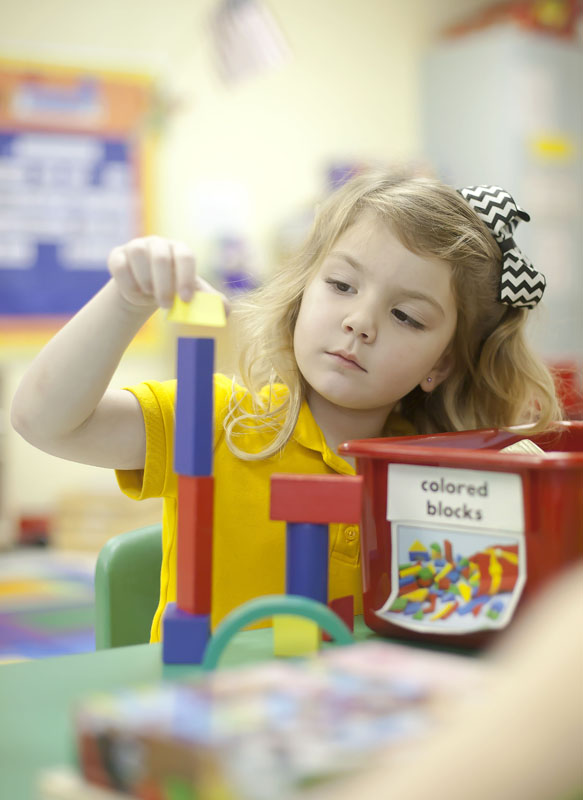 A preschool student works with blocks at Charleston Elementary. 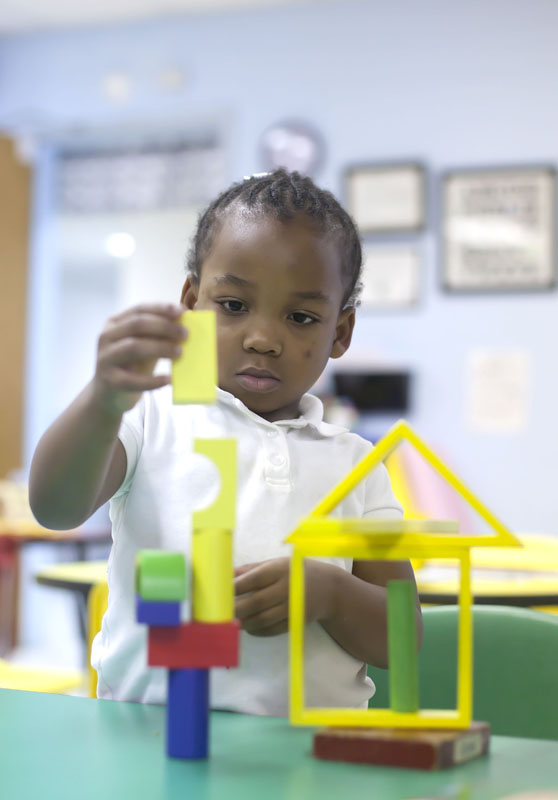 Alaysiah Oliver works with blocks in the preschool class at Charleston Elementary. 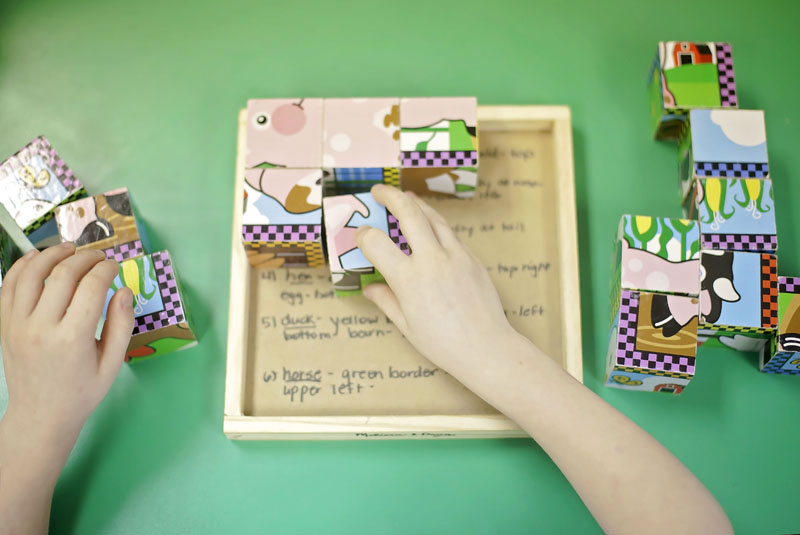 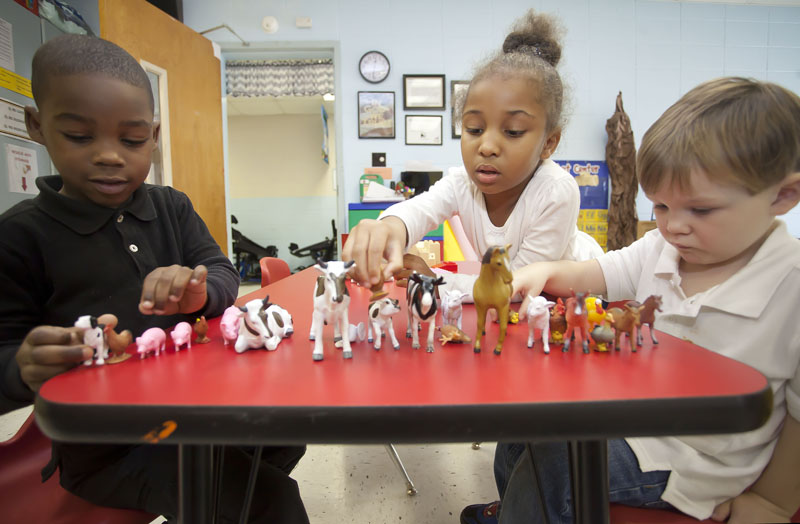 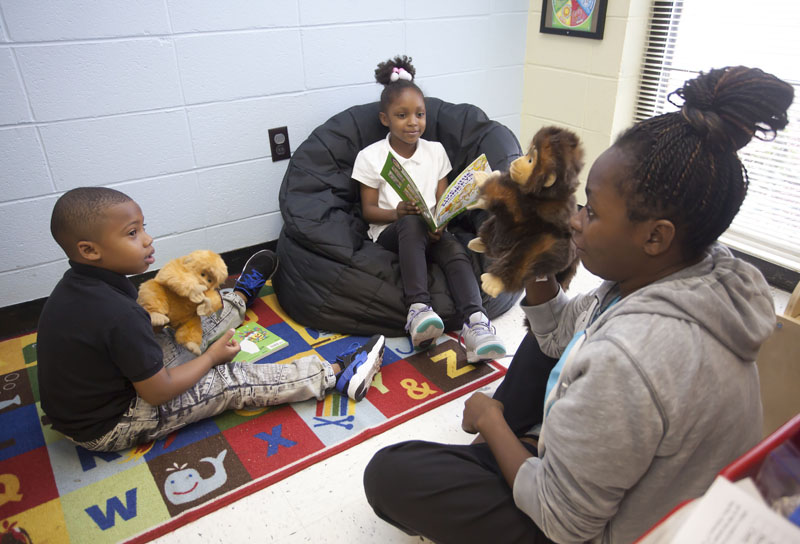 Charleston Elementary is a school in the Mississippi Delta that benefits from Morgan Freeman's philanthropic organization, the Tallahatchie River Foundation.