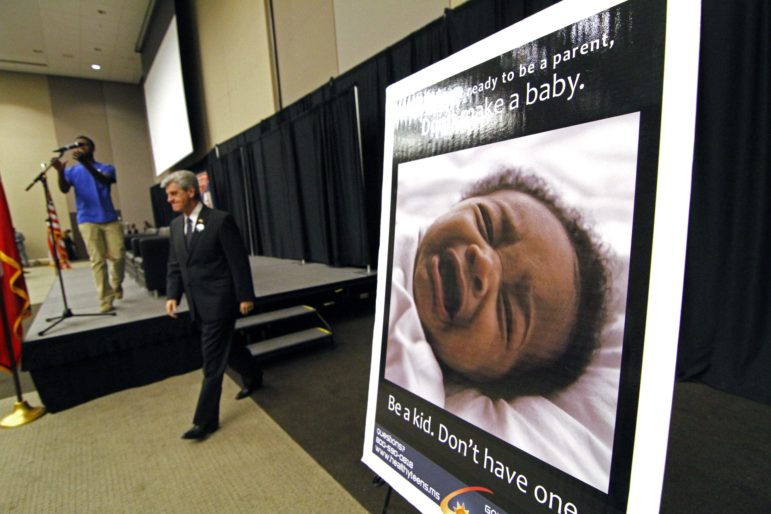 Gov. Phil Bryant walks past one of several new posters that will be distributed statewide to schools calling to mind the responsibilities of being a teen parent, Thursday, Dec. 6, 2012, during the First Annual Teenage Pregnancy Prevention Summit in Jackson. Coahoma County saw a 60 percent decrease in births per 1,000 teens from 2010 to 2016

CLARKSDALE – Despite teen pregnancy rates seeing a downward shift across the country, Mississippi ranked third highest in the nation for teen birth rates in 2016. In the Arkansas-Mississippi Delta region the rates remain above the national average and a new study, released today, points to socioeconomic factors in the region contributing to the slower decline among Delta teens.

Coahoma County saw a 60 percent decrease in births per 1,000 teens from 2010 to 2016, supported in part by an infusion of federal grants to aid teen pregnancy prevention programs. Still, Coahoma’s rate stood at 33.2 in 2016, slightly surpassing the statewide average at 32.6 births. The national teen pregnancy rate the same year was 20.3, according to the Centers for Disease Control and Prevention.

But numbers can vary drastically by year, in part due to population size and reporting practices, and teen pregnancies spiked again recently in Coahoma County. In 2017, the state’s health department reported the county about doubled the 2016 rate, at 68 teen births per 1,000. The report, commissioned by the Walton Family Foundation, echoes the most recent data fluctuations and warns decreases in teen births should be taken with a grain of salt, even though it points to positive overall gains since 2010.

(Disclosure: The Walton Foundation is a Mississippi Today funder.)

The study looked at socioeconomic barriers — like poverty, lack of comprehensive sex education and discrimination — as well as broader policies and community norms that can compound to contribute to teen pregnancy rates. For example, the study uses CDC data to predict that a teenager is seven percentage points more likely to become pregnant if they do not talk to their parents about birth control, compared with teens that do. The report uses this data and census reports to drill into Delta-specific trends and state policy as indicators for teen pregnancy rates, like Mississippi state law requiring parents to decide if their child receives sex education.

These findings come from “Accelerating Teen Pregnancy Prevention in Phillips County, Arkansas and Coahoma County, Mississippi,” a report released Wednesday by Mathematica Policy Research, commissioned by the Walton Family Foundation. The report focused on Coahoma and Phillips counties as part of the organization’s “home region.”

“If we want to empower young people to take control of their reproductive health, we have to offer them the full range of health care options that they can use – both short term and long term – and we must ensure that they can use, change, and adapt these methods to the ways that work for them,” said Izzy Pellegrine, sociologist and sex education researcher at Mississippi State.

Pellegrine said that the report is first step to naming systemic factors that contribute to teen pregnancy, but more work is needed

“Further, acknowledging that systemic factors such as racism and poverty affect teen sexuality and reproduction is a great first step. The critical next step is to intervene at not only the individual level, but also the structural level where we know these forms of inequality are affecting our communities,” she said.

Teen birth rates are higher in areas with high poverty, a younger population, and low education rates, according to the report. These factors aren’t uncommon for a county like Coahoma where 35 percent of residents live in poverty, more than a quarter are under the age of 17, and less than 20 percent have a bachelor’s degree or higher.

Lack of opportunities for African Americans — who represent more than half of Coahoma’s 22,000 population — and youth, generational cycles of teen parents, and restrictive sex education policy exacerbate teen pregnancy rates in under-resourced communities throughout the Delta.

“Teachers are coming at sex education in good faith,” she says. “But it matters what information teachers personally have and what they believe about sexuality and reproductive health.” 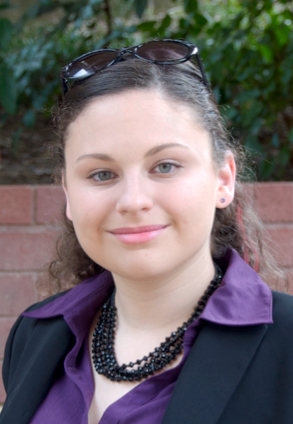 With the strict application of abstinence-based education and limited teacher training, comprehensive lessons about birth control are crucial, Pellegrine argues, but limited and can easily fall through the cracks.

For students in Clarksdale schools, sex education can be inconsistent and varied from school to school, according to both the Walton report and first-hand accounts.

“I think it’s largely based on what teachers are available … not who the specific teacher is. It just needs to be a much bigger priority,” said Bianca Zaharescu, co-founder of the local Spring Initiative, a non-profit after-school and family program organization.

More than half of teens ages 15 to 19 have had sex, according to Mississippi’s State Department of Health, and 39 percent report not using a condom. Zaharescu adds that people should realize teens “will have sex in one way or other,” which is why she supports having more informative and thorough conversations.

“And by that I don’t mean just kind of health, sex ed, and reproductive part. … I think part of that is really talking about the relationships part, boundaries, and all these soft factors that go into people’s decision.”

Parents overwhelmingly expressed support of sex-related education being taught as early as fifth grade, according to a 2011 statewide survey conducted by the Social Science Research Center at Mississippi State University, and 97 percent of respondents with the “highest level of support” were from the lower Delta region.

Rep. Jeremy Anderson (D-Escatawpa) worked with Teen Health Mississippi to introduce a bill last legislative session that would have required sex ed curriculum to be evidence based, and to change current sex ed from “opt-in” to “opt-out.” The bill died in committee. As is, parents have to actively enroll students into sex ed, rather than pull them out. The Walton report points out that the opt-in policy is counter-intuitive to ensuring student enrollment. Parents reported wanting more sex ed for their children, but opt-in rates varied from 30 to 75 percent across the region.

Areas with high teen pregnancy rates also see more sexually transmitted diseases. Mississippi has the highest rate of chlamydia and gonorrhea — with young people aged 15 to 24 comprising more than half of those diagnoses — and the Delta region has among the highest HIV prevalence in the nation. “Few school districts have adopted education policies that reflect an integrated approach to preventing HIV, STD, and unintended pregnancy,” according to a Mississippi Department of Education report.

“Those topics are very important to discuss but we also need to do the whole gamut of life. We’re not just one dimensional creatures … we need to talk about drug use … anatomy and physiology, hygiene, good decisions, because it’s a decision thing,” Presley said.

“At first, a lot of people don’t have sex ‘cause it’s fun, they’re trying to make friends. Some are having sex because they are being pimped out by family. We found out that. That’s the only way to pay bills. We’re focusing so much on the sex-ed thing that we’re missing out on the whole person.”

As a facilitator at Delta Health Partners, Presley ensures parents – adults and teenagers – get resources that are beneficial to them socially and economically. Presley works hand-in-hand with organizations like Spring Initiative, who also provides support services – one-on-one mentoring and peer support networks to teen parents.

The nonprofit also centers its work around preventive measures like college access, which the Walton report points to as a teen pregnancy reduction indicator.

“[We’ve] very much taken the role of … continuing those relationships and trying to continue offering support,” Spring’s Zaharescu said. “You’re (teens in the program) still a full person and you still have your romantic life and your career. And also now,  your child is like your biggest priority. That’s been a real blessing to see too. How do we value that?”

While acknowledging teen pregnancy rates have steadily declined, in order to effectuate sustainable changes, it takes everyone putting their resources together, said Presley, from a local, state, and federal standpoint.