Coaches and athletic directors from every public college and university in the state travelled to the Capitol on Thursday morning to deliver a clear message to legislators: It’s time to change the state flag, which features the Confederate battle emblem. 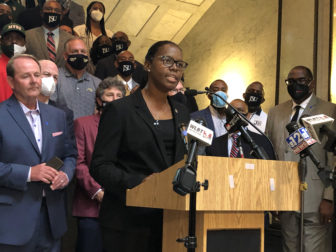 “I know firsthand what it feels like to see the Confederate flag and pretend it doesn’t have a racist, violent or oppressive overtone. It screams hate,” Nikki McCray-Penson, head women’s basketball coach at Mississippi State University. “There is no place in our society for a symbol of discrimination, hatred and oppression.”

All coaches are now directly affected by state flag, as the NCAA, SEC and Conference USA have all respectively banned all postseason college athletics events from being hosted in Mississippi until the flag changes. 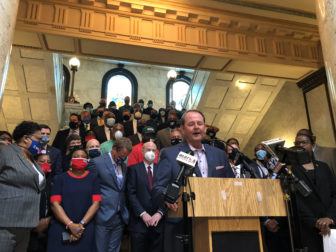 House Speaker Philip Gunn attended the press conference and spoke strongly on behalf of changing the flag, telling the crowd no one can argue the flag isn’t damaging the state as the post-season bans have “now brought a quantifiable hurt” upon Mississippi.

“This entire state is screaming for change. This is an issue that needs to be resolved, and resolved quickly,” Gunn said. “The longer it goes, the more it festers and the harder it’s going to be later on. The image of our state is at stake here, ladies and gentleman. The nation is watching.”

Leaders in athletics are not the only ones to speak out against the flag — this week the Mississippi Baptist Convention, Mississippi Economic Council and the chair of the Mississippi Republican Party have all come out against it, arguing its harming the state’s reputation and serves as a painful symbol of oppression to many residents.

The Legislature needs a two-thirds vote in each chamber to change the flag. It’s likely they will try in the coming days.