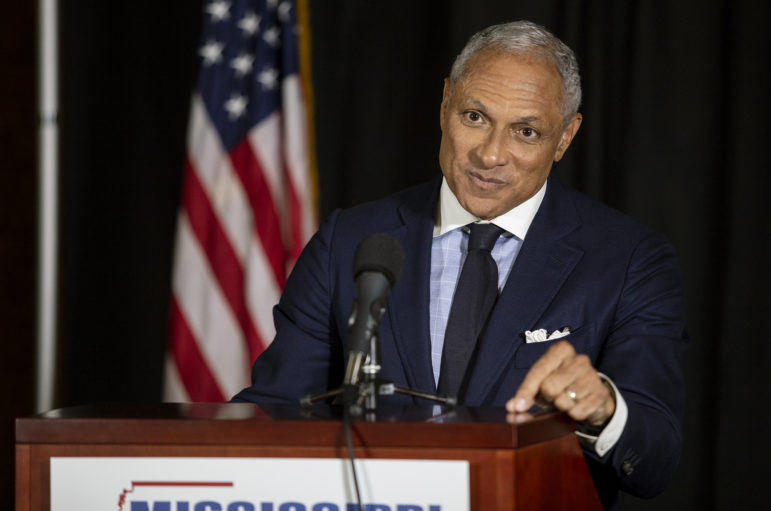 Mike Espy speaks to media after his debate against Sen. Cindy Hyde-Smith inside the Farm Bureau Federation auditorium Tuesday, November 20, 2018.

Espy, the Democratic former congressman who’s running against the Republican senator in the November election, attacked Hyde-Smith over comments she made in March in which she said the coronavirus pandemic would be “over in two weeks.”

The first COVID-19 cases were confirmed in Mississippi the same week she made that comment.

“Hyde-Smith has simply not done her part to stand up for Mississippi,” Espy said of the senator’s COVID response in a fundraising email on Thursday morning. “This is a sitting senator who is actively hurting her own people.”

Espy also said Hyde-Smith “voted to take money away from unemployed workers while our unemployment rate doubled, and took off for summer recess without providing any additional relief for those struggling.”

When asked for comment, a spokesman for the Hyde-Smith campaign fact-checked several lines of the ad and said of the unemployment critique: “Not true. (Hyde-Smith) supported unemployment benefits. It is Democrats who are blocking the latest relief bill.”

“The increasingly false and desperate campaign being run by Corrupt Mike Espy is shameful. There’s not a single part of this ad that’s true,” Hyde-Smith campaign spokesman Justin Brasell said. “If Mike Espy thought he had any realistic chance to win this race, he would not resort to these kinds of despicable tactics and lies. Senator Hyde-Smith has fought for billions in relief funds to assist unemployed workers, healthcare providers, and small businesses as we all work to safely reopen our economy and fight this global pandemic.”

This is Espy’s second television ad in as many weeks. Meanwhile, Hyde-Smith has not yet purchased airtime — an unusual reality for an incumbent senator less than two months from Election Day.

Espy has outraised Hyde-Smith in all but one campaign finance reporting period this year. And Hyde-Smith has raised less money this year than 96 incumbent U.S. senators. The three who have raised less than her announced they were not seeking re-election.