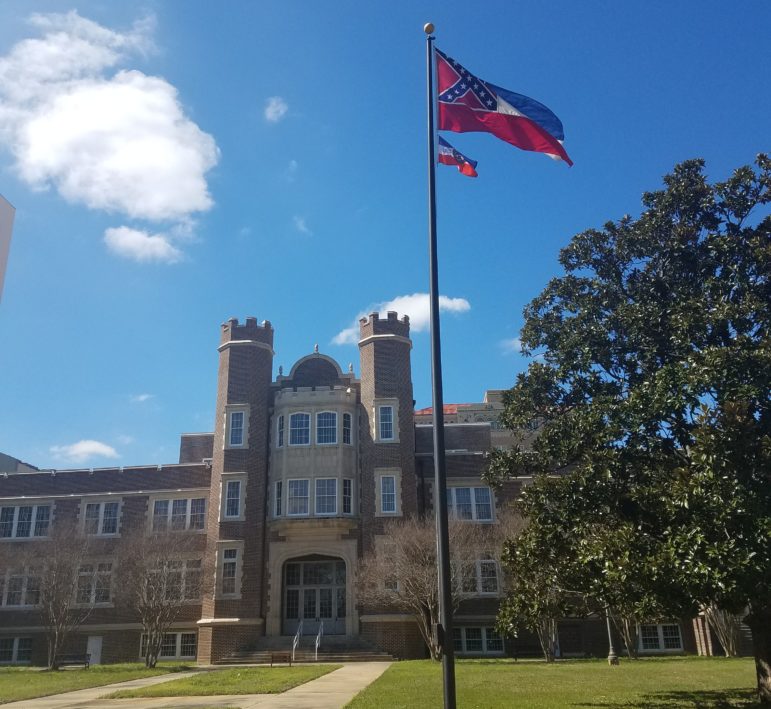 Gov. Tate Reeves in a press conference Wednesday said it was “very likely” he would veto the budget bill for the Mississippi Department of Education, a state agency that oversees almost 900 public schools and more than 465,000 students.

If he does — the deadline to sign it is midnight Wednesday — the Legislature will be dealing with the veto in the midst of chaos caused by the fact that both presiding officers, Speaker Philip Gunn in the House and Lt. Gov. Delbert Hosemann in the Senate, have tested positive for COVID-19.  State Health Officer Thomas Dobbs said Wednesday 36 cases of coronavirus came from an outbreak at the Capitol, and 26 of those were lawmakers.

Under the rules suspension in place it is likely that legislators could come back to address any veto without having to be called into special session by the governor. But Reeves surmised that because of the coronavirus outbreak in the Capitol, “It would be at least 14 days from today before the Legislature could meet remotely safe … and that’s only remotely.”

The education budget, about $2.2 billion in state funds, was one of the last approved by legislators before they adjourned with the intent to come back in the coming days to deal with one final budget for the Department of Marine Resources. Last week the Legislature approved a budget in the midst of declining state revenues caused by the coronavirus. Under the roughly $6 billion budget approved, most agencies will absorb cuts of between 3 percent and 5 percent for the current fiscal year.

The possible veto comes from the governor posting on social media Tuesday that “the education bill has a major problem,” saying the Legislature cut teacher pay by more than $26 million. He was referencing the school recognition program, which provides monetary rewards to schools that improve letter grades.

By moving the funding for this program into the main school funding program instead of earmarking it for the recognition program, the governor said, “over 20,000 teachers will get less pay than they earned if we allow this budget to become law.”

The Legislature created the program in 2014. It is a merit-based pay system to incentivize teachers and staff in high performing schools and those who are improving letter grades. Teachers in A-rated schools or improve from a ‘F’ to ‘D,’ or ‘D’ to ‘C’ receive $100 per student, and ‘B’ rated schools receive $75 per student. Since 2017, the Legislature has funneled about $71 million into the recognition program.

For the current  budget year, information provided by the Department of Education indicates it would take $28 million to fully fund the program for about 21,000 teachers who qualify for the funds based on their schools’ grades. Reeves maintained Wednesday, more than 23,000 teachers would lose the bonuses. For fiscal year 2020, nearly 21,000 teachers in 510 public schools collectively received $25 million, according to Mississippi Today’s analysis of program records.

While Gov. Tate Reeves cited that teachers “will see pay cuts of a couple thousand dollars,” Mississippi Today’s analysis of the data found no teacher received thousands of dollars.

Last year, the Legislature created new guidelines clarifying that the money should only be awarded to current and certified staff of the eligible school and the award must be distributed evenly. For the first two years of the program, it has been difficult to solidify the accurate number of teachers receiving rewards because the Mississippi Department of Education has not kept record of this information.

House Education Chairman Richard Bennett, R-Long Beach, on Wednesday said legislative leaders had contacted the governor’s office, and assured him the program can continue without him vetoing or lawmakers having to redo the budget.

“As chairman of Education, the loss of the School Recognition program deeply troubles me. Regardless of budgetary movements, it was and continues to be our intent for MDE to fund this program,” Bennett said. “We informed the governor’s staff that legislative clarification will easily fix this matter, and that a veto was unnecessary. The Legislature can provide a deficit appropriation into the future to fund expenses for MDE to continue this program.”

Schools would qualify in the current fiscal year beginning July 1 for their educators to receive the funds based on their rating for the 2018-19 school year, according to information from the Department of Education.

The program was part of a pay increase provided to teachers in 2014. Then-Lt. Gov. Reeves and then-Senate Education Chair Gray Tollison, R-Oxford, were the primary proponents of the program. Some education advocates argued against the program, saying it would result in teachers trying to work in top performing or improving districts where they were more apt to receive the extra pay.

“The first couple of years the guidance sent out, based on what the Legislature wanted, was for individual schools to form a teacher committee to make a decision based on how the money would be dispersed. I don’t think the forms asked how many teachers would receive the money. It was more or less … we just needed something on record to determine how they were going to disperse that money,” Pete Smith, Mississippi Department of Education chief of communications and government relations said in February in an interview with Mississippi Today.

If Reeves vetoes the education budget as he said he is likely to do, he said under a 2010 Attorney General’s opinion funding to for the public schools can continue because education is identified as a constitutional mandate of the state.