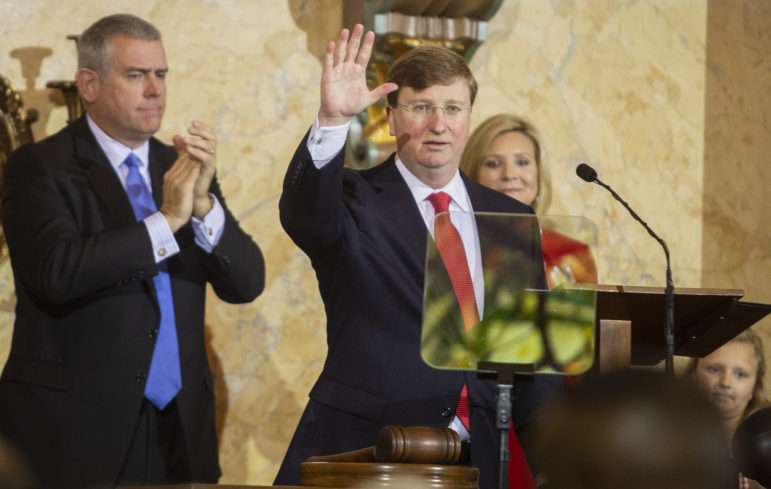 Gov. Tate Reeves waves after delivering his address during his inauguration ceremony inside the House chamber at the Capitol in Jackson, Miss. Jackson, Miss., Tuesday, Jan. 14, 2020.

Eight years ago, former Gov. Haley Barbour left Gov.-elect Phil Bryant with a mess of national proportion: Barbour freed more than 200 Mississippi inmates, some of whom were serving sentences for murder, through the use of gubernatorial clemency just days before he left office.

Bryant did his best to distance himself from the scandal that reached newspapers across the nation, but later vowed to never issue pardons himself and talked of the Legislature limiting future governors’ pardon powers.

Reeves must navigate the crisis without a permanent leader in place at the Mississippi Department of Corrections.

The agency’s top two leaders, Pelicia Hall and Jerry Williams, are out as of Jan. 15, both leaving the agency to pursue opportunities in the private sector — a reality that falls squarely on Reeves’s shoulders, who, as chief executive of the state, oversees the department. Reeves has announced several state agency head appointments since he was elected in November, but he has not yet appointed a leader of the corrections department.

Sources briefed on Reeves’ plans told Mississippi Today that Reeves has discussed appointing an interim commissioner and conducting a national search for a permanent corrections leader. It is unclear who is running the department in the meantime; a department spokesperson did not immediately respond to a request for comment about the matter.

Years of state underfunding and overcrowding have preceded several violent uprisings in recent years, including one that resulted in the deaths of at least five inmates across the state in early January.

Bryant, in his final hours in office, used an obscure state law to enter into a $2.1 million contract with a private prison company to house 375 state inmates for 90 days because the conditions at a state facility were so perilous. Lawmakers, many of whom are questioning the legality of the contract, may be forced to pass a deficit appropriation early in the 2020 legislative session to cover the cost of the contract.

Yo Gotti and Jay-Z, two of the most famous hip-hop artists in the world filed a lawsuit against the state this week, bringing international attention to the crisis, and dozens of advocates have rallied at the Capitol several times in the first week of the legislative session.

A U.S. congressman and powerful advocacy groups sent a letter to the U.S. Department of Justice, begging the feds to step in and force state leaders to act.

Reeves, facing a previously unexpected political firestorm in his first day in office, added a refrain about the prisons crisis in his 13-minute-long inaugural address on Tuesday.

“Here is my promise: This will be an administration for all Mississippi,” Reeves said in his address. “… It will mean cleaning up corrections — to provide for the safety of our citizens and the human dignity of all within the system.” 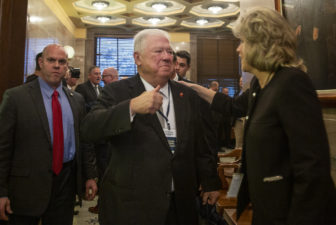 The Department of Corrections has had a rocky history. When Bryant took over as governor in 2012, he reappointed Barbour’s agency head Chris Epps. Two years into Bryant’s term, Epps was indicted on federal corruption charges after accepting more than $1 million in kickbacks and bribes and using his government post to steer contracts to private companies in the corrections industry.

While Reeves hasn’t directly overseen the corrections department the past eight years, many advocates, who have spent years warning lawmakers of the dangers that the prison system faces, blame Reeves as much as anyone for that underfunding. As lieutenant governor for the past eight years, Reeves largely controlled the state’s purse strings and oversaw several annual or mid-year Department of Corrections budget cuts.

“Mississippi’s officials and legislators have been well aware of but taken no steps to remedy the overincarceration and understaffing crisis that has been building for years, resulting in dozens of deaths and culminating in the violence of the last two weeks,” advocates wrote in a Jan. 7 letter asking for a U.S. Department of Justice investigation.

“State officials acknowledge but simply refuse to address the dangerous, widespread staffing shortages at state and privately operated MDOC facilities. As a result, some 20,000 people in MDOC custody are systemically exposed to substantial risks of serious harm in violation of the Eighth Amendment.”

In his few public statements about the prison system this year, Reeves has pointed to gang violence within the prisons as his priority. Advocates acknowledge the prevalence of gang activity inside the prisons but say that underfunding, general prison conditions and sentencing standards need to be addressed.

“Stop with the lies,” Sharon Brown, an advocate with Victim’s Voice, said at a rally last week. “Families are scared to speak out because when they do, their loved ones get thrown in the hole and have the shit beat out of them. It is not a gang war, it is a systemic war.”

Pointing at the Capitol she added: “The biggest gang sits right there.”