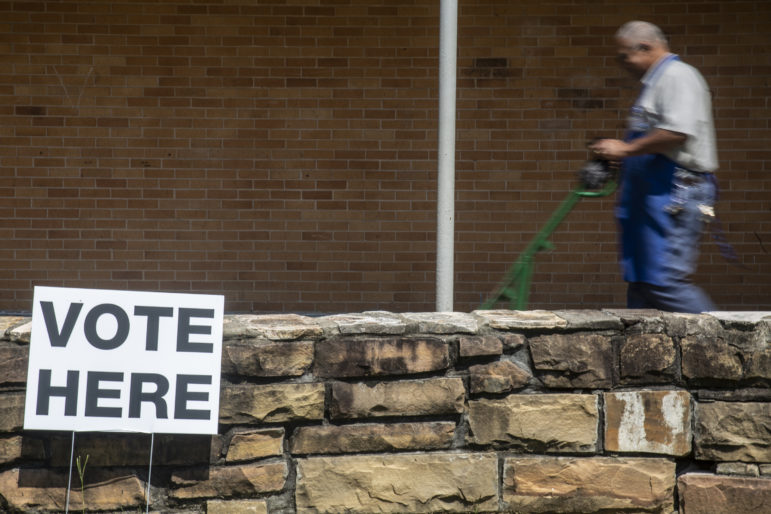 A sign notifying voters where they can cast their votes sits outside of Chastain Middle School during Mississippi’s Primary Election Day, Tuesday, August 6, 2019.

A second lawsuit has been filed challenging Mississippi’s restrictive absentee voting requirements in advance of the Nov. 3 general election.

Most states allow people to vote early in person and by mail, but to do so in Mississippi, voters must provide an excuse, such as being away from home on election. The existing law makes Mississippi one of the most difficult places in the nation to vote early.

On Thursday, the Lawyers Committee for Civil Rights Under Law, the Southern Poverty Law Center and private attorneys have filed a lawsuit in the federal court for the Southern District of Mississippi on behalf of state residents and organizations claiming the state’s absentee voting rules are unconstitutional because they could jeopardize the health of citizens trying to vote during the COVID-19 pandemic.

The suit was filed against Secretary of State Michael Watson and Attorney General Lynn Fitch.

“Mississippi has some of the most restrictive burdens on absentee voting in the nation that run afoul of the Constitution and have a particularly stark impact on Black voters,” Jennifer Nwachukwa, counsel at the Lawyers’ Committee for Civil Rights Under Law, said in a news release. “As a historic number of people are expected to cast their ballot this fall amid the ongoing pandemic, election officials have failed to take action that will ensure that all voters across Mississippi will have their voice heard. With weeks to go before the November election, we are turning to the court to defend the right to vote for people across Mississippi.”

Even though the state has the nation’s second highest number of coronavirus cases per capita, Mississippi is one of the six states that “do not allow legitimate fear of illness from COVID-19 as an excuse to request an absentee ballot,” according to the lawsuit.

The lawsuit said Mississippi laws and regulations do not comply with the federal Centers for Disease Control and Preventions guidelines developed to help ensure voter safety.

The lawsuit says Watson, the state’s chief elections officer, did not rule that changes made by the Legislature earlier this year would allow people concerned with the coronavirus to vote early either in person or by mail. Watson has said he is waiting on an official opinion from Attorney General Fitch’s office on just how the new legislation would impact early voting during the pandemic.

The state requirement of having both an application for an absentee ballot and the ballot notarized also places voters at more risk because they have to leave their homes twice to seek out an official to notarize the documents, the lawsuit maintains.

The issues addressed in the lawsuit are similar to those filed in a state court case earlier this month by the Mississippi Center for Justice, the American Civil Liberties Union and the ACLU of Mississippi on behalf of a group of Mississippians concerned about voter safety.