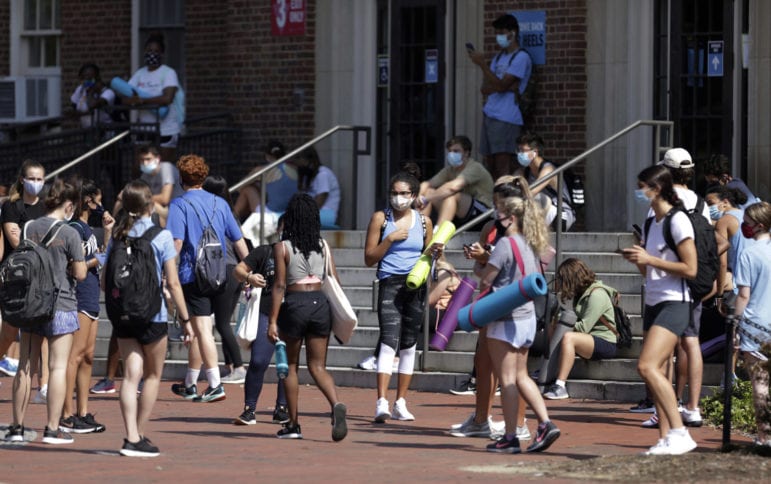 University of North Carolina students wait outside of Woolen Gym on the Chapel Hill, N.C., campus as they wait to enter for a fitness class Monday, Aug. 17, 2020. The University announced minutes before that all classes will be moved online starting Wednesday, Aug. 19 due to COVID clusters on campus. (Julia Wall/The News & Observer via AP)

Two Mississippi universities reported COVID-19 outbreaks this week as tens of thousands of students return to campuses across the state.

Colleges around the country have been forced to halt their in-person reopenings, and the talk of American higher ed this week is how to keep students safe during the worsening pandemic.

But on Thursday, the 12-member board of trustees of the Mississippi Institutions of Higher Learning — the governing body of the state’s eight public universities — held a 26-minute meeting that ended without a single mention of the coronavirus.

The IHL board’s monthly meetings are an opportunity to communicate with the public about issues facing the higher education community. Board members on Thursday, participating in a conference call meeting, however, did not discuss the most topical issue.

An IHL spokeswoman did not respond to a request for comment after the meeting.

All of Mississippi’s public universities opened on Aug. 17 except for the University of Mississippi, which is scheduled to open Aug. 24.

This week, the board’s regular meeting happened the day after the state’s top health official announced that the Mississippi Department of Health was investigating two outbreaks at Mississippi universities.

“We’re extremely concerned about colleges,” State Health Officer Dr. Thomas Dobbs said during a Wednesday press conference. “We’ve seen, certainly across the country, a lot of situations where people have actually had to close college right after they opened it. Certainly, that’s not something that we would want to see (in Mississippi).”

One of the confirmed outbreaks is at the University of Mississippi, and one is at the Mississippi University for Women. Dobbs did not disclose the number of confirmed cases for these outbreaks, but he said the MUW outbreak occurred after students visited the Cotton District in Starkville, home to the much larger Mississippi State University.

“Not a big surprise, right? We know when people socialize and get in groups, concentrated, not wearing masks they’re absolutely going to spread the coronavirus,” Dobbs said.

As of Aug. 20, the number of confirmed Coronavirus cases on UM’s campus had risen to 161 total with 28 new cases this week.

The week before, UM faculty pressed Chancellor Glenn Boyce at a town hall meeting about why the university planned to reopen when area infection rates have significantly worsened. Boyce alluded to a system-wide decision, but faculty otherwise could not get a clear answer.

In the weeks leading up to the start of school, faculty of at least two Mississippi universities sent open letters imploring their administrations to rethink their reopening plans.

Delta State University’s letter asked that all but “essential classes” be moved online.

“The situation worsens by the day and to ignore the likelihood of a coming health catastrophe on our campus is a position morally untenable to us,” the letter reads.

Mississippi State University’s letter, signed by more than 300, proposed the same and called to conscience what returning to school would mean for the university’s most vulnerable staff members.

“Janitorial and custodial workers face the greatest risk from a large population returning to campus, and they will not be receiving hazard pay … Those facing the greatest risks of exposure through an increase of student contact have had little say in the decision-making process, have less job security, more limited benefits, and are not being compensated for their heightened vulnerability.”

As COVID-19 grips college campuses, IHL board meets for 26 minutes without discussing pandemic