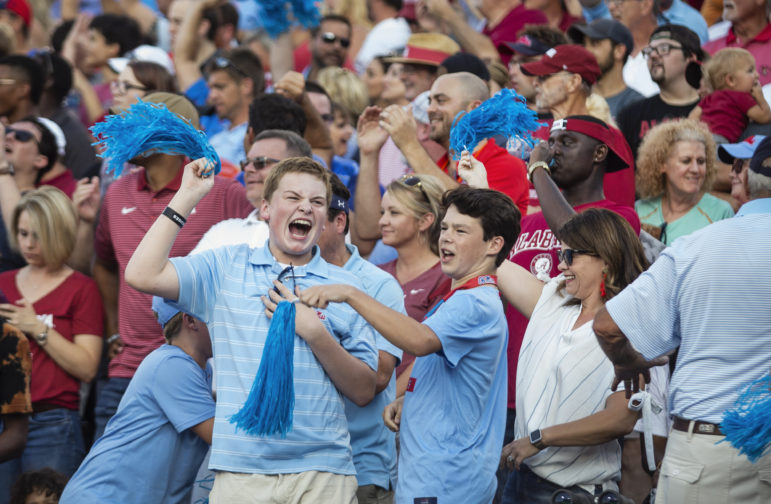 University of Mississippi fans cheer during the Ole Miss-Alabama game on Saturday, Sept. 15, 2018.

No tailgating and other social gatherings will be allowed before or after college football games, and stadiums will be limited to 25% capacity under an executive order Gov. Tate Reeves announced Thursday.

Reeves acknowledged the ban on tailgating during the COVID-19 pandemic will be unpopular. In Mississippi, tailgating is often considered more popular than the game itself.

But on Thursday, Reeves touted the fact that Mississippi is scheduled to have football. Some conferences, such as the Pac-12 and Big Ten, have cancelled their fall seasons.

“This is an effort, which we worked closely with the universities on, to set the floor,” he said in a statement. “…This the minimum that each school is required to do this fall to keep players and spectators safe while allowing college football to occur.”

While some athletic conferences have opted not to compete this fall, the Southeastern Conference, of which both the University of Mississippi and Mississippi State are members, plan to start their football season on Sept. 26.

The University of Southern Mississippi is slated to kick off its football season hosting South Alabama on Sept. 3. The Southwestern Athletic Conference, of which Jackson State, Alcorn State and Mississippi Valley are members, plan to play a spring football slate.

“I have made clear to the universities that they have to work hard to make sure these guidelines are strictly enforced,” Reeves said.

The guidelines mandate six feet separation in seating for people who are not part of the same family. It also mandates hand sanitizer being provided at the stadium and the opening of all entry gates and restrooms to limit crowding. A mask mandate will also be in effect when spectators are not seated.