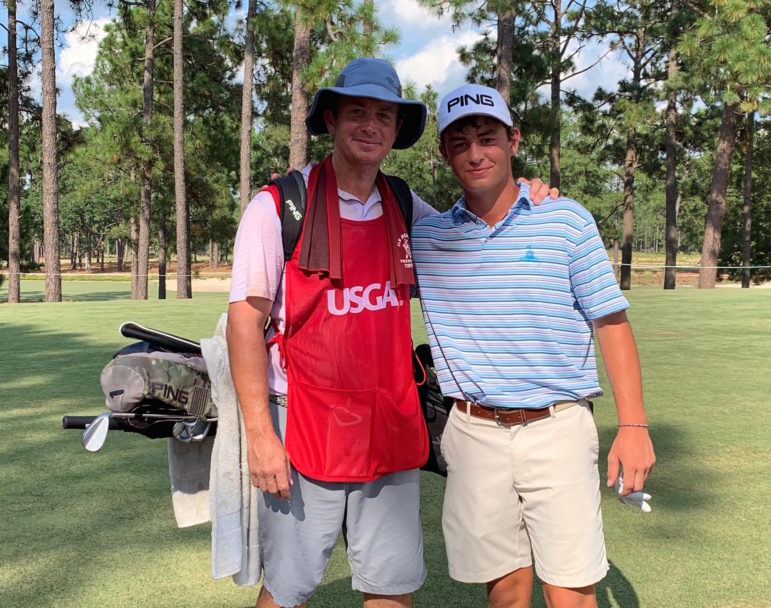 Instead, Trolio and his father/caddy, renowned golf instructor V.J. Trolio, were making the 2,550-mile, cross-continent trip back to Mississippi in a rental car.

Cohen Trolio, who remarkably made the semifinals of the U.S. Amateur last year at age 17, tested positive for COVID-19 and had to withdraw from this year’s tournament.

He got the news on Friday night. On Saturday, he turned 18. Happy Birthday, Cohen.

“It’s all right,” Cohen Trolio said in phone conversation as he and his father were approaching Wichita, roughly two/thirds of the way home. “Nothing the USGA or I could do about it – just following the rules.”

The United States Golf Association (USGA) required two tests for all participants, including caddies: one, before leaving their hometowns to make the trip; and two, upon arriving at Bandon Dunes. Both Trolios tested negative for COVID in West Point last week. At Bandon Dunes, Cohen Trolio tested positive, while his father tested negative.

Cohen Trolio said he feels fine and has shown no symptoms. He already is eligible for next year’s U.S. Amateur at famed Oakmont Country Club in Pennsylvania because of his semi-final berth in the 2019 championship.

His dad was more philosophical.

“This is just one of those things that happens when you are trying to play championship golf in a pandemic,” V.J. Trolio deadpanned.

“We’re disappointed, obviously,” V.J. Trolio said. “We were told that of all the 250 or so entrants, just two tested positive. Cohen was one of the lucky two. That’s life. The USGA did a great job. We have no complaints about anything where the USGA is concerned. This is just the world we live in right now. This stuff is real.”

Following Centers for Disease Control and Prevention (CDC) guidelines, the Trolios were left with two choices: quarantine for nearly two weeks in Oregon or find private transportation home, being careful not to expose anyone.

“No restaurants or anything like that,” said V.J. Trolio, who said the rest of his family is quarantining at home in West Point.

File this one in this category: What a difference a year makes. Last August, playing on national television for the first time, young Trolio defeated several older, more experienced golfers en route to the national semifinals at Pinehurst, N.C. In the semifinals, Trolio ran into fellow Mississippian Andy Ogletree, who plays college golf at Georgia Tech. Ogletree defeated Trolio in the semis and went on to defeat Kentuckian John Augenstine for the championship.

Before last year, no Mississippian had ever advanced to the quarterfinals of the national amateur championship.

“Man, how amazing is this for Mississippi golf?” Golf Channel announcer and former prominent PGA Tour player Jim Gallagher of Greenwood said at the time. “… It’s amazing how junior golf in Mississippi has changed. We’ve got better courses and better instruction and what you’re seeing at Pinehurst is all the proof you need.”

Cohen Trolio’s instructor, since he was little more than a toddler, has been his dad.

“He’s my man,” Cohen Trolio said last year after his quarterfinals victory. “He’s got my back.”

Cohen Trolio finished 25th in the prestigious Sunnehanna Amateur in July, shooting rounds of 71, 67, 70 and 69 in Johnstown, Pa. He said he was playing his best golf of the summer leading into this week’s event at Bandon Dunes.

“I was driving the ball well, playing the best I have all year,” he said. “I had worked hard. I thought I was ready. Of course, it’s golf and you never know, but I felt really good about it. I was as ready as I could be.”